Inside A Gallerist’s Stylish Sandymount Home

Alanna spins in front of a pair of John Boyd ?Arbor? paintings. The airplane sculpture by Andrew Clancy sits on a nest of G Plan tables. The mid-century rocker chair is by Ole Wanscher for France & Sons (Denmark, circa 1950).

As well as three busy little children, Nicholas and Lizzie Gore-Grimes get to share their urbane Sandymount home with an ever-changing carousel of fabulous furniture and art

WHO LIVES HERE Nicholas Gore-Grimes, owner of Dublin’s Cross Gallery and Cafe, his food-editor wife, Lizzie, and their three children, Andrew (seven), Patrick (six) and Alanna (three).
THE HOUSE A villa-style single-storey period property on a snug little square in Dublin’s Sandymount.
WHY WE LOVE IT It’s a functioning family home and work space that manages to be beautifully stylish and child-friendly at the same time.

“Dealing in mid-century furniture is a new venture for us; we’re constantly seeing new pieces and getting excited.” Nicholas and Lizzie Gore-Grimes are sipping tea at a big Welsh farmhouse table in their large light-filled kitchen, which faces out onto serene greenery. Nicholas runs contemporary art gallery Cross Gallery on Francis Street, Dublin 8, which now exhibits a beautifully curated mix of mid-century furniture. As a result, art and furniture pieces from the gallery often make their way into the couple’s period home in Sandymount, Dublin 4 – and some pieces make their way from home to gallery – but they relish the variations. “It’s exciting to change things – it gives us a chance to refresh our pieces,” says Lizzie about the odd disappearing item. “I don’t get too attached to the furniture, as it’s an opportunity to get something else.” As parents to Andrew, seven, Patrick, six, and Alanna, three, they keep furniture practical too, Lizzie says. “Our Welsh farmhouse table has taken phenomenal abuse and the G Plan swivel armchair is fairly robust. They use that like a merry-go-round?” 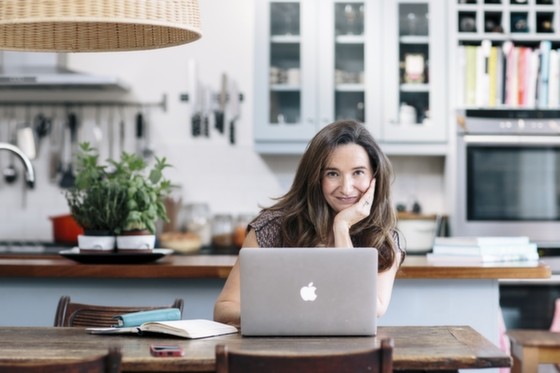 What drew you to your house in Sandymount’s Havelock Square? The single-storey, double-fronted villa style of the house instantly appealed. It’s also on a lovely square – the family-friendly location really sold it.

What work have you done on it? Our architect, David Leyden, came up with a plan that would leave the period exterior and two front rooms untouched but open up the rest of the house to create an extra bedroom, bathroom and an open-plan kitchen/living space. The advantage to a one-storey house is that you can bring light in from the ceiling throughout the house.

Lizzie, you write about food and edit cookbooks – was the kitchen space important to you when renovating the house? I had been planning my dream kitchen for years. Having spent years living in small apartments, counter space was high up on my wish list, plus a little utility room. My biggest indulgence, though, was the Gaggenau five-burner gas hob, which I still get such enjoyment out of using every day.

You work from home a lot, too, Lizzie – how do you find time and space to do that with three young children? It’s not without its challenges, I’ll admit! I try to work solidly while they are at school, until 2.30pm, and then keep my afternoons free to do homework and after-school activities with them – but inevitably pressing deadlines mean I’m working away while sitting on the sidelines of the swimming pool. The MacBook Air has been my saviour; I just take it everywhere with me. The new modern office!

Nicholas, you’ve added a cafe and mid-century furniture into the mix at the Cross Gallery. How did that come about? We opened the cafe last summer and it’s going great. With the help of our architect David Leyden (of Leyden, Hassett & Associates) I think we’ve succeeded in creating a complementary space which has hugely increased our footfall in the gallery. I think people can find walking into a gallery a bit intimidating but a cafe by its nature is warm, welcoming and sociable, so it acts as the perfect anteroom to the gallery. We launched the Cross Collection in July and the reaction was hugely encouraging so we plan to host two dedicated mid-century furniture sales a year – one in July/August and one in December/January. But throughout the year we will always have a selectamount of stock on view and an active website that will show the full collection.

How would you describe your style as a couple? We admire things that are well made but are practical as well as having a strong aesthetic. When you have three small children and a limited amount of room, you have to make sure that each piece in the house justifies the space it takes up.

Photography Doreen Kilfeather (you can check out her own darkly dramatic home in our Picture Perfect house tour).