Katherine Zappone donates her wedding dress to the National Museum

Ireland’s minister for children and youth affairs, Katherine Zappone, has generously donated both her and her wife’s wedding dresses to the National Museum of Ireland. The dresses will be on display at Collins Barracks as a symbol of Irish history.

Katherine married the love of her life, Dr Ann Louise Gilligan, in January 2016. Despite being together for 35 years, and despite wanting to get married in Ireland sooner, the lack of marriage equality in this country meant their wedding was off the cards.

The women were a constant force in the struggle for equal marriage rights; fighting hard for the Irish legal system to recognise their 2003 Canadian marriage. Their actions reignited a debate which eventually led to the establishment of civil partnership rights, and later the Marriage Equality referendum of 2015.

That year, Ireland made history; becoming the first state to legalise same-sex marriage by popular vote. Just two months after the referendum passed, Katherine and Ann Louise tied the knot in Dublin Castle.

Sadly, Ann Louise passed away in June 2017. She left a valuable legacy through her work in the area of adult education, particularly for disadvantaged women in Ireland.

Since her passing, Katherine has kindly decided to donate their wedding dresses to the National Museum’s Contemporary Ireland Collection, which collects and preserves items of importance to our nation throughout the history of the Irish Republic to the present day. 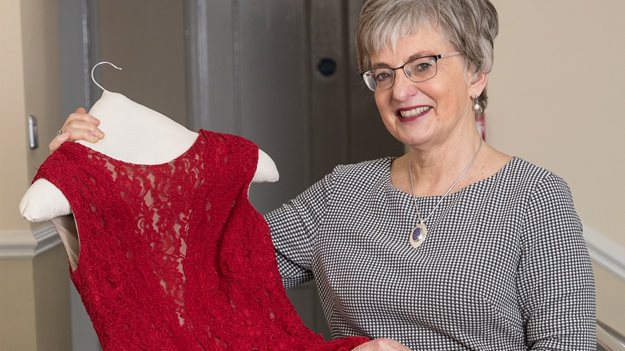 In a statement, museum curator Brenda Malone said, “As the wedding dresses become part of the NMI collections, they represent Katherine and Ann Louise’s love and life together, and their personal struggle for equal recognition.

“In a wider sense, they also represent the Irish LGBTQ community’s struggle for equality, and the Irish nation’s story of social change. The NMI is committed to recording and preserving these stories.”

What’s more, museum director Lynn Scarff said, “The National Museum is actively collecting the history of Irish society and its recent developments in order to tell Ireland’s story into the future.

“We are honoured by Minister Zappone’s donation of her and her wife’s wedding dresses and what they represent. Through this gift and future collecting, the museum takes an important step forward in representing all members of Irish society.”

Admission to the National Museum of Ireland is free. For opening times, visit museum.ie.