When most people hear the word ‘activist’ they think of an individual who leads marches, makes posters, knocks on doors, writes tweets and shares blog posts. However, cartoon illustration is also an extremely powerful tool that can be used as a form of activism. Here are some of Ireland’s best…

A Twitter sensation, Ciara is most commonly known for her fantastic feminist cartoons and coverage of the repeal of the eighth referendum. Ciara is very modest and says she doesn’t consider herself an activist.

“I don’t really consider myself an activist as I don’t think I’ve done nearly enough work for that, but I’ve been lucky to be able to work alongside some wonderful campaigners who dedicate huge amounts of their time and energy to causes I care about, too. For me, any art or cartoons I’ve produced on particular issues have been an attempt to share what I’ve learned from them along the way and try to get that information to even more people”

Related: Sinéad Burke named as one of the most influential women

Ciara has always had a love for drawing and has been doodling since ‘Draw with Don’ was on the Den. When she was in UCC she began drawing topical and political cartoons for the student newspaper and magazine, and once she finished college she started posting her work online.

It’s one year since Ireland repealed the eighth amendment, and it is no doubt cartoons like Ciara’s, which were shared on social media, contributed to this success. ‘Undecided’ was one of Ciara’s favourite pieces of hers for the campaign, as she said it helped her to clarify a lot of questions that she met while out canvassing.

“It seemed to help others when it was shared online, too. And at the end of the day, that was the ultimate point – get the right information out there and help people to change things for the better. And I think – I hope – we did”. 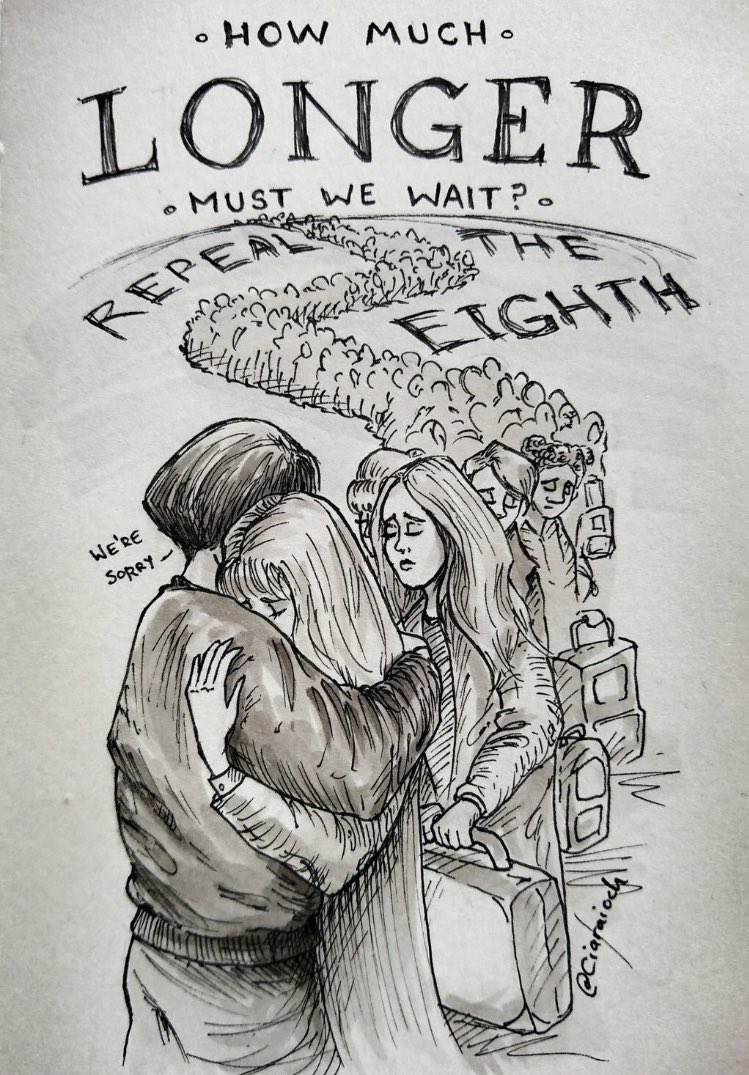 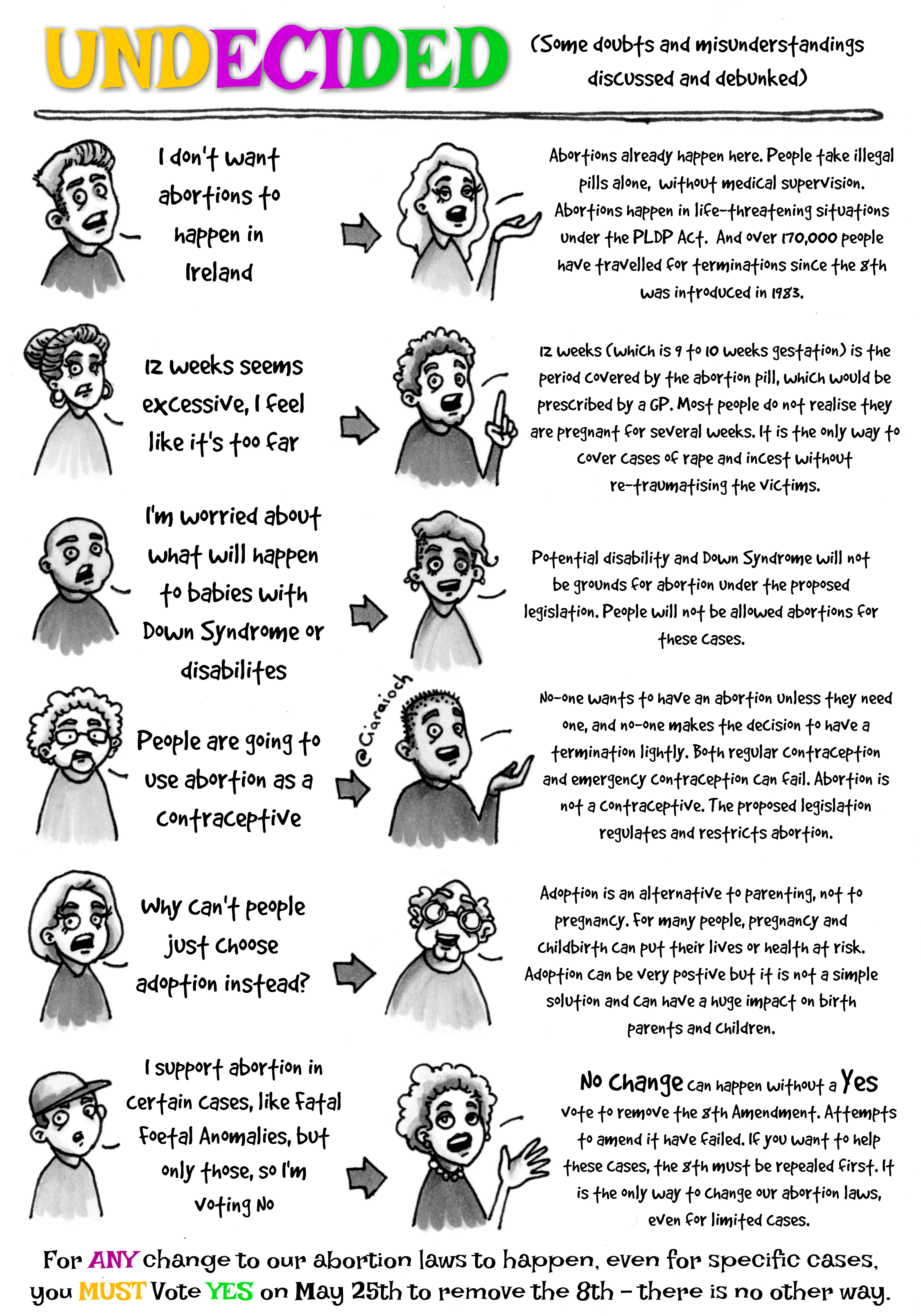 “I would like my political satire to expose foibles right across the political and social spectrum.”

Donal Casey is an illustrator and cartoonist who also works as a lecturer. As a teenager in the 1980’s, he says all he wanted to be was a cartoonist, however, it wasn’t exactly a smooth ride. He has now been drawing cartoons professionally and consistently for 15 years and has been creating political cartoons regularly for around 12 years.

Although he has created an abundance of political cartoons, Donal doesn’t consider himself an activist as such. He explains that he thinks the public space is full of loud and angry views, especially online, and that he prefers to express his views on a smaller scale.

“I would like my political satire to expose foibles right across the political and social spectrum, but in my experience people often only really react positively to a political cartoon when it confirms a view or bias that they already have. I like it when a cartoon causes people to laugh. I also love the aesthetics of cartooning and really appreciate and enjoy a well-crafted cartoon” 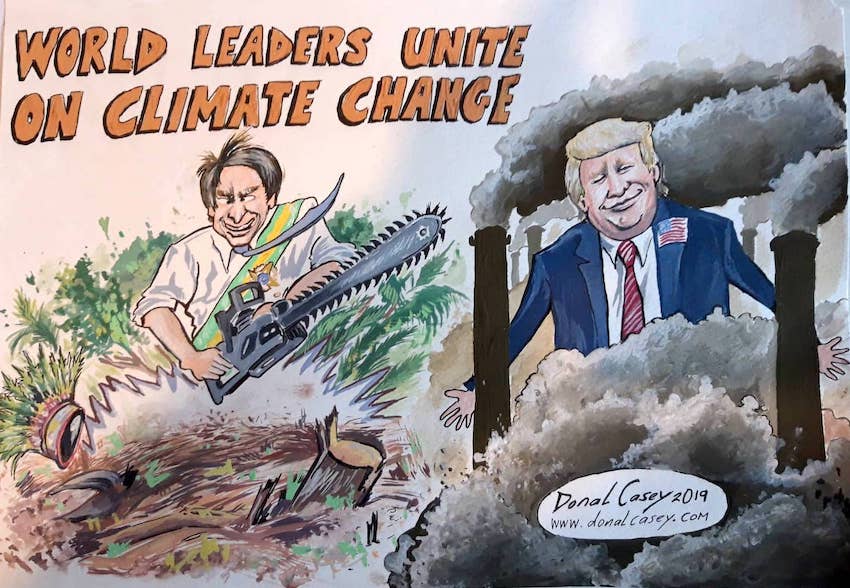 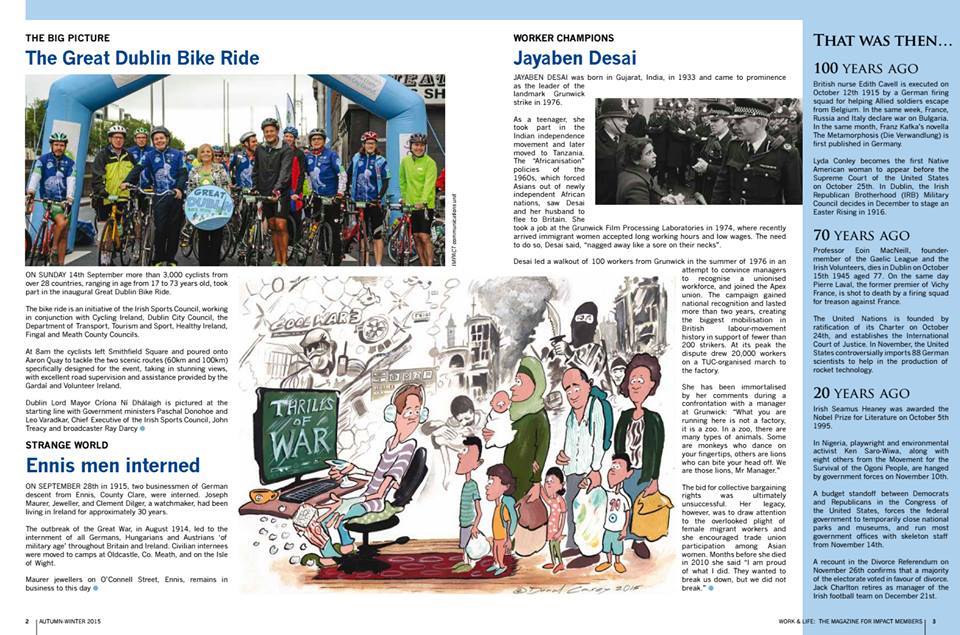 Laura uses satirical illustration to highlight social, economic and environmental issues. She has been drawing since she was a child and began to create illustrations in college seven years ago.
“In college, I began exploring feminism and consumerism with my work, I then chose a degree course which had a strong focus on socially engaged art and design and then started focussing my work solely on issues I was passionate about, ranging from climate change to austerity,” she said.
The talented illustrator believes that art is an incredibly important way for her to communicate her ideas and that she would consider herself an activist.
“An image can deliver an instant message with such power and poignancy, and hopefully help people see something from a different perspective” 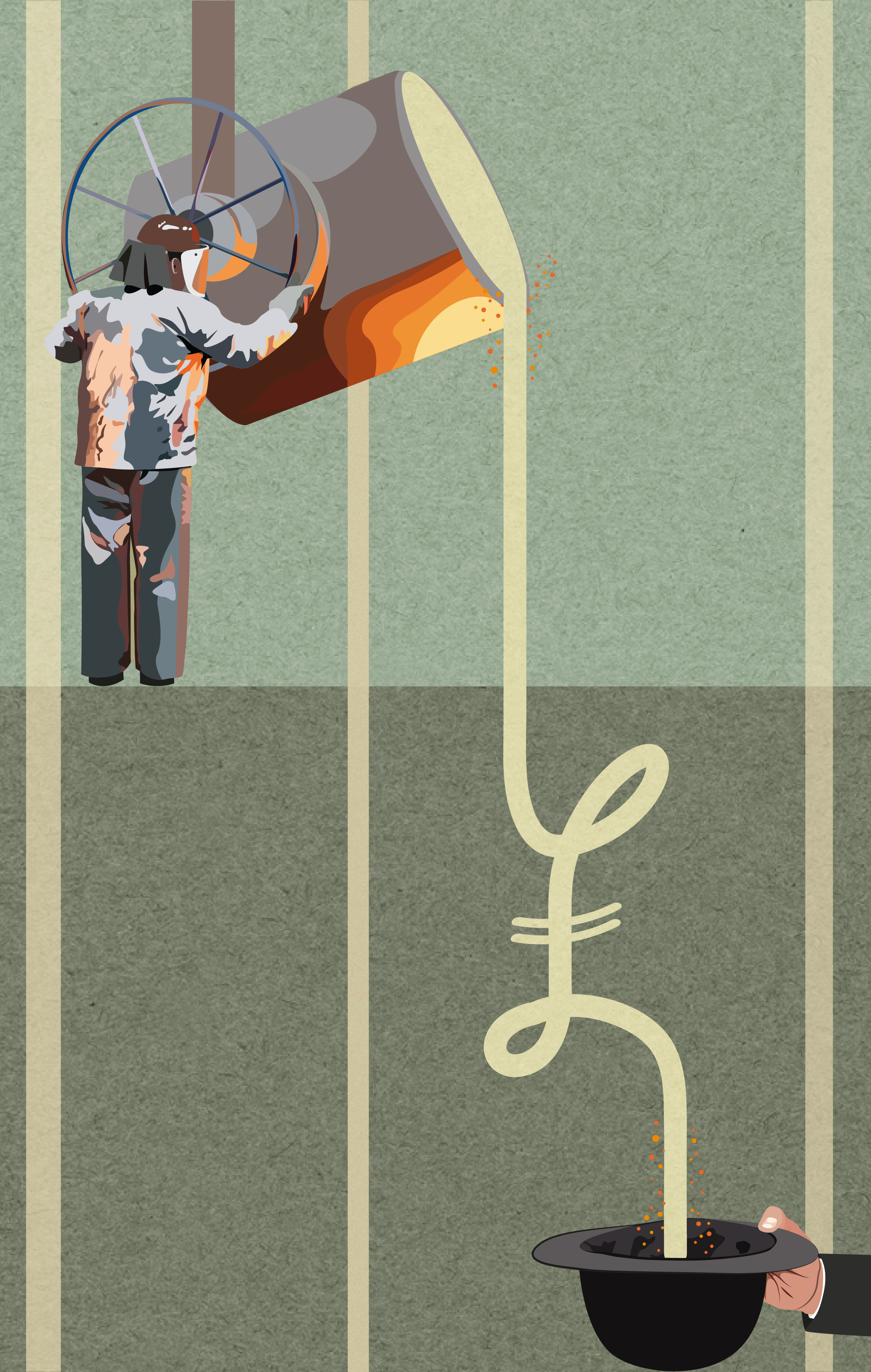 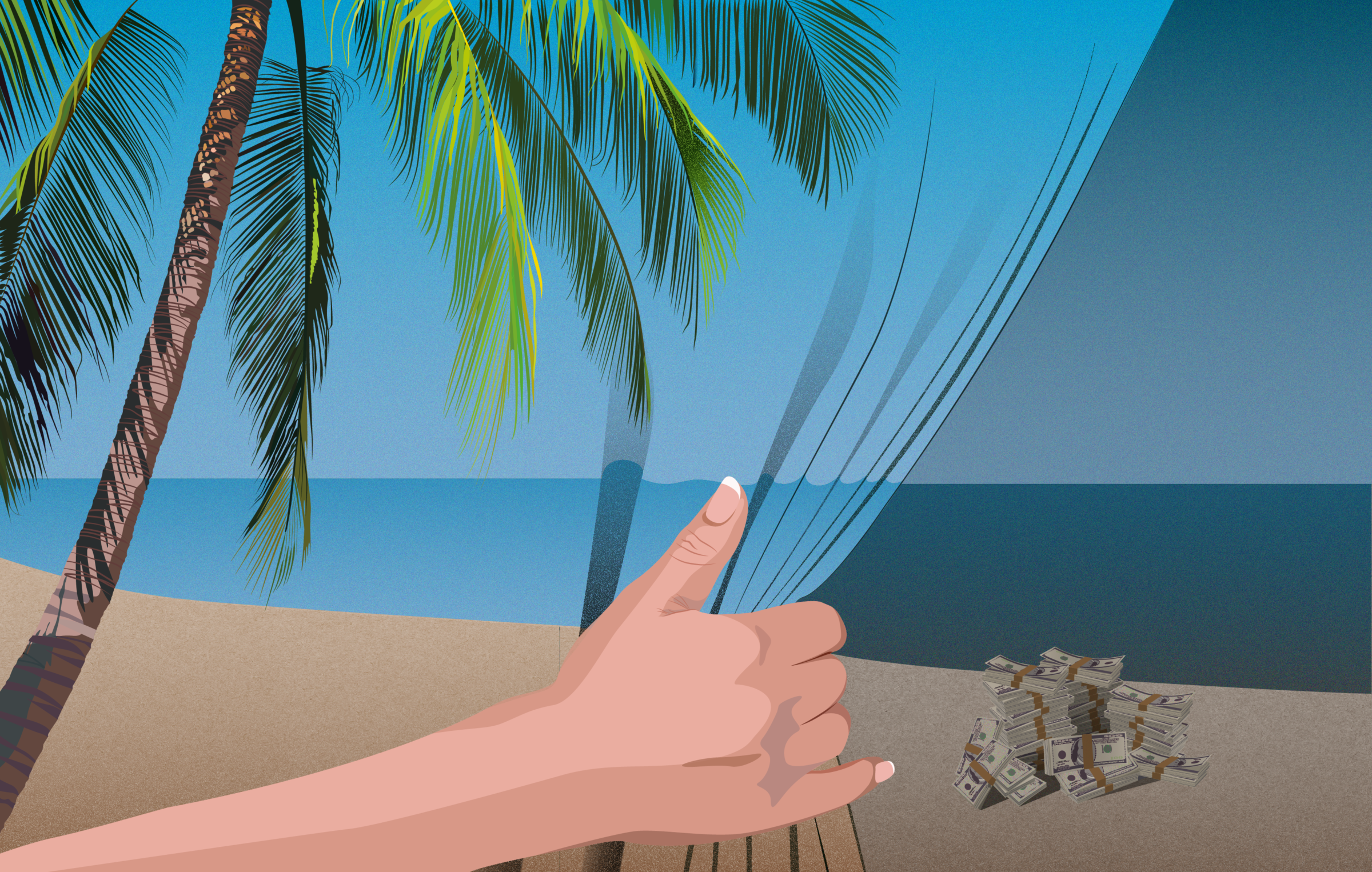 Mark’s political cartoon work kicked off when he was working as a civil engineer in Botswana in the early 1990’s. Over there, he had a weekly political strip called ‘Fence Sittin’ in Mmegi newspaper.

At the time, apartheid was still in place over the border in South Africa and there were limits to political comment; in the time he was there two other expatriate journalists were given 24 hours to leave the country. Mark used the pen name ‘Luke Warm’ which he has used ever since.

“While I wouldn’t consider myself an activist, over the years I have drawn for many campaigning publications, do like to sound off about things I don’t agree with and have from time to time followed this through with action.  Most recently I ended up out in Lesvos as a volunteer spotter for Refugee Rescue trying to help protect migrants making the crossing from Turkey, which paradoxically actually followed on from my drawing the strips below”
It’s no surprise that it can be difficult to make a living out of being a political cartoonist. Mark says, like everything in the media industry, it is due to the abundance of free news and cartoons available on the internet.
“It is becoming increasingly difficult to get paid work published in newspapers, magazines or even online.  So far these Brexit cartoons have had plenty of Like’s on my own Twitter, Instagram, and Facebook accounts but that’s as far as it’s gone”. 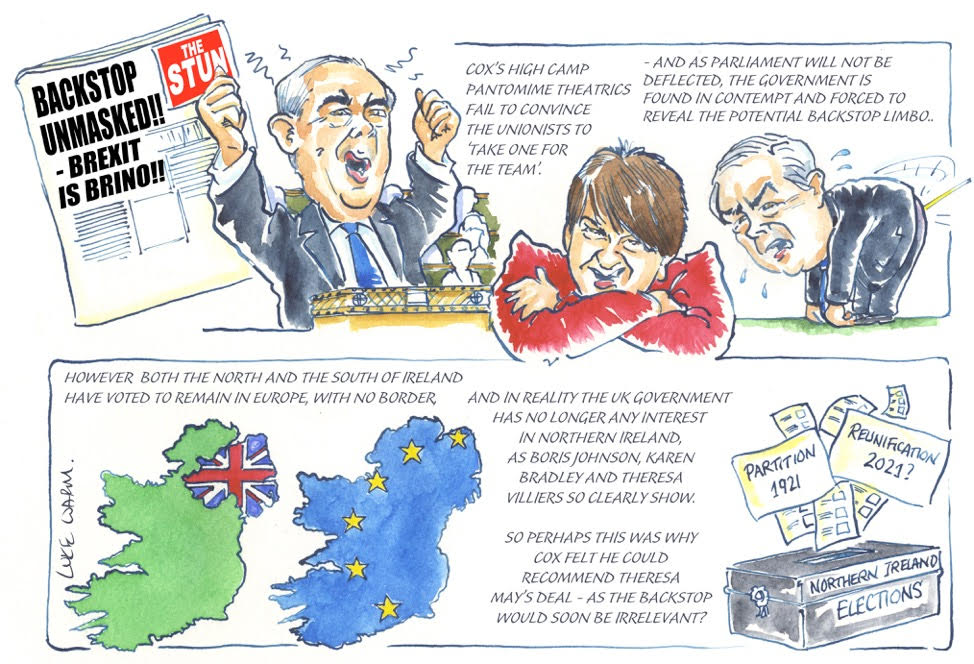 Read more: Is marketplace feminism stealing the limelight from real female-driven issues?
Read more: One year since Repeal: Eight ways to channel your activism
Read more: ‘Sorry for the inconvenience but we are trying to save the world’