Climate change protestors have gathered on the streets of major cities around the world this week including Dublin. But can the ‘social change revolution’ actually help to shape policy, or it is all just a lot of hot air? Amanda Cassidy reports.

Extinction Rebellion is a group calling publicly for non-violent civil disobedience to push for the declaration of a ‘climate emergency’. Those involved in the protest in London are demanding that governments set legally binding targets to reduce carbon emissions to net zero by 2025.

They are also calling for the establishment of a Citizens Assembly to deal with it. It is now six days into the ‘occupation’ of London’s city centre with a number of camps and roadblocks set up. Some locked themselves to lorries and blocked bridges – a bid to grab attention and to reiterate their message; that we are on the edge of ecological collapse and it is time to take action.

For some critics of the gathering, this is simply an excuse for a day off work. Many have sneered at the carnivalesque atmosphere associated with the gathering which also held ’emotional disruptions’ at Heathrow airport yesterday.  For others, the force behind such a huge protect has all the hallmarks of a political turning point. So is this long-overdue action actually helpful, and does it finally mark the momentum needed to shape policy?

Two leading climate change experts think not. Corrinne Le Quere is the professor of climate change and policy at the University of East Anglia. She told the BBC that the protestor’s demands are “probably quite unrealistic” and that it was unlikely that we could “move completely away from fossil fuels by 2025.” Economist Lord Stern says that a target of zero net emissions by 2050 is a lot more likely.

Metropolitan police have also pointed out that the campaigners are diverting resources away from policing. Officers wearing ‘protester removal team’ vests began trying to break up the protect in London in recent hours. On Twitter, the police said: “The protesters are using tactics of lying on the ground when approached. This means that it takes at least four officers to remove one person to ensure their safety which is resource intensive.” ” Almost 600 people had been arrested by this morning. In Dublin’s O’Connell Street, hundreds gathered in clusters, playing music and chanting on loudspeakers – one sign read “Sorry for the inconvenience but we are trying to save the world.”

“We are close to climate devastation” explained one protestor in Dublin. “We are running out of time. Only a handful of countries are on target to meet the temperature thresholds set out in the Paris agreement. We’ve had three decades of scientific warnings and yet over 80% of our energy is still sourced from fossil fuels. I’m here today to make my voice heard before it is too late.” 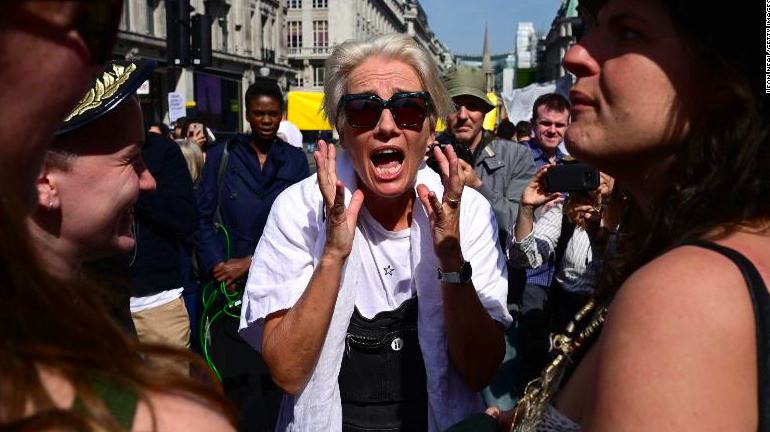 “This is the most pressing and urgent problem of our time, in the history of the human race.”

There is no doubt that protestors have built bonds of solidarity and have managed to people talking about the issue. But creating meaningful change requires more than talking about ‘caring’ for the planet. As Andre Spicer, professor of organisational behaviour at London City University, puts it ‘this language appeals to the left but antagonises the right’. Over the years, climate action has been largely ineffective while associated with extreme groups banging drums and wearing tie-dye.

But all that is changing  –  in recent weeks, children across the world took to the streets, striking from school to demand action on climate change. And although many metaphorically patted them on the head, it marked the start of a broadening of the issue. It is becoming increasingly obvious that this is a problem that affects us all. Can climate change finally become a mainstream issue that reaches across the political divide?

Yes, thinks Professor Spicer. He calls is the radical flank effect – when more extreme groups make us aware of a problem – thus forcing authorities to work with more moderate movements to create solutions. Perhaps the daring extinction rebellion has finally made people sit up and take notice.

In an era of celebrity obsession, maybe it is those in the spotlight that will finally tip the balance. Emma Thompson was among those protesting in the streets of London yesterday. The Oscar-winning actress injected a new sense of energy and urgency into the climate movement as she climbed aboard the pink climate change bus to say a few words.

“This is the most pressing and urgent problem of our time, in the history of the human race,” she said. “I have seen the evidence for myself and I really care about my children and grandchildren enough to want to be here today to stand with the next generation,” Thompson added.

“If we have not taken dramatic action within the next decade, we could face irreversible damage to the natural world and the collapse of our societies.”

Speaking to the BBC, the Love Actually actress defended her decision to fly thousands of miles to join the protest. “One of the things that has happened, consistently, over the decades I’ve been protesting about this is it’s always turned back on the individual. The fact of the matter is everyone has been asking for clean energy for decades and it has been ignored for decades. So where is the hypocrisy? If I could fly cleanly I would.”

But the time for bickering about who flew the farthest or who is leading the climate change charge is over. In his strongest statement yet, Sir David Attenborough pointed out the scale of the crisis facing the planet. “In the 20 years since I first started talking about the impact of climate change on our world, conditions have changed far faster than I ever imagined.  It may sound frightening, but the scientific evidence is that if we have not taken dramatic action within the next decade, we could face irreversible damage to the natural world and the collapse of our societies.”

This is not a fringe issue and the next step we take is now up to all of us as individuals. Extinction Rebellion may be born out of sheer frustration, but perhaps the tide is turning. Perhaps taking to the streets will force change. But how sad that it has come to this.

Disneyland Paris is reducing its carbon footprint – here’s how – more

The Love Island presenter has divided social media after she singled out a journalist trying to confirm the name of...