Book review: Notes to Self is as personal as it is possible for writing to be

When Emilie Pine told her mother she wanted to write a book of personal essays, she asked what they would be about. “I paused a moment,” writes Pine, “then took a breath and told her: ‘They’re about alcoholism, and miscarriage, and sexual violence, and depression, and silence. And they are also about finding strength, and working hard, and learning to speak out.’”

Her mother understood why she would want to write that book, she said, but to actually publish it?  That she did not understand.

Given that the opening sentence of Pine’s new non-fiction collection of essays, Notes to Self, reads “by the time we find him, he has been lying in a small pool of his own shit for several hours,” a reference to her father, then deep in the throes of the alcoholism that nearly killed him, her mother’s concern is understandable.

Notes to Self is as personal as it is possible for writing to be. Pine, Associate Professor in Modern Drama at University College Dublin, has commented that the writing of this book was “very painful”, but the urge to write was, while “dangerous and fearful,” also necessary.  Her aim, she says, was to “unlock the code of silence”. There is power in sharing our experiences, she explains.

The result is a powerful, beautifully written work. The opening chapter sees Pine and her sister in Corfu, called to their father’s hospital bedside, and tasked with essentially bringing him back to life. “Without your family here, you die”, a fellow visitor tells her. When they arrive, her father, writer Richard Pine, by then an alcoholic for four decades, has been given the nickname “the corpse”.

“Typically, as with most things concerning Dad, it’s both funny and not funny.”

Pine perfectly captures the toxic mess of dependency, chaos and resentment that exists between family members and addicts. Growing up, they “knew not to ask anything of him…Like all children of heavy drinkers, we developed a particular kind of watchfulness. We learned, through experience, not to trust. We learned to cope with crisis.”

A few years before the trip to hospital, Pine had begged her father to stop drinking. Listening to her, he poured himself another glass of wine. Later in the night, watching him, she thought “just die now.”

But she is trapped.

“It is hard to love an addict. Not only practically difficult, in the picking up after them and the handling of those aspects of life they’re not able for themselves, but metaphysically hard. It feels like bashing yourself against a wall, not just your head, but your whole self.” Caught between the never-ending ultimatums and acceptances, “the person who loves the addict exhausts and renews their love on a daily basis.”

Never shirking, Pine writes about her struggles with fertility. The decision to have a baby, the weirdness of having unprotected sex and how that begins to pall as the months pass, then the creeping fear. “I start to wonder why sperm and egg are being so coy at this whole getting together thing.” The ovulation tests, the loneliness of infertility, the hammering a relationship takes. With unflinching honesty she describes having a miscarriage in an Ireland which prioritised the life of the foetus over that of the mother. “Ambiguity does not mean that there will be a baby. Instead, it means the total disempowerment of us as ‘parents’ of this ambiguous pregnancy.”

When she was a child, Pine’s parents separated. Five years old at the time, she remembers them before the split; happy, playful, loving, together. And then the moving house, her sister’s cough which lasted for months, going to see her father on weekend afternoons, her mother “raising two small children in a house with no heating and damp walls and not enough money.”

Pine writes with painful clarity on what it is like when your parents don’t speak, when your mother cries and you blame yourself, your father gets a girlfriend and cancels his appointment to see you, and your mother, the only thing holding you world apart, drinks, and cannot give you dinner, or put you to bed.

Of being a family which in the Ireland of that time were other. “Most other families did not look like ours”.

Women’s writing is often diminished for being located in the domestic, in the emotional. It is gendered rather than being regarded as of universal appeal in the way that male writing is, deemed too personal, too confessional. All ways of saying it is in some way lesser. In fact, it would be hard to find writing more powerful than that in these essays. Revealing oneself to such lengths in this type of unflinchingly truthful writing requires immense bravery. It does an important service, shining a light on the realities of the human, and often specifically the female, experience.

Pine writes forensically about the female experience, so much of it not regularly put within such plain sight, although that is changing. About periods and pubic hair, shaving, ‘bodily self-appraisal’, and judging oneself. About wanting to be likeable, and acting as if one’s body is an embarrassment. About the policing of women. The paranoia that one is “not feminine enough, not desirable enough, not good enough,” a feeling which, Pine writes, is “the ultimate performance of femininity.”

Ultimately, Pine suffered a “silent breakdown”. To help in minding herself, Pine now keeps a new to-do list. “Actually, it’s not a to-do list. It’s more like a series of notes to self.” She will value her ideas and feelings. She will do the things that make her feel most alive. Work on the things that she feels passionate about. Speak out on misogyny and sexism. She will look after herself, after her body. Spend time with the people she loves, and remember that “the real failure is to not try.”

She was afraid at the thought of writing so honestly. “I am afraid. But I am doing it anyway.”

These are notes for everyone. 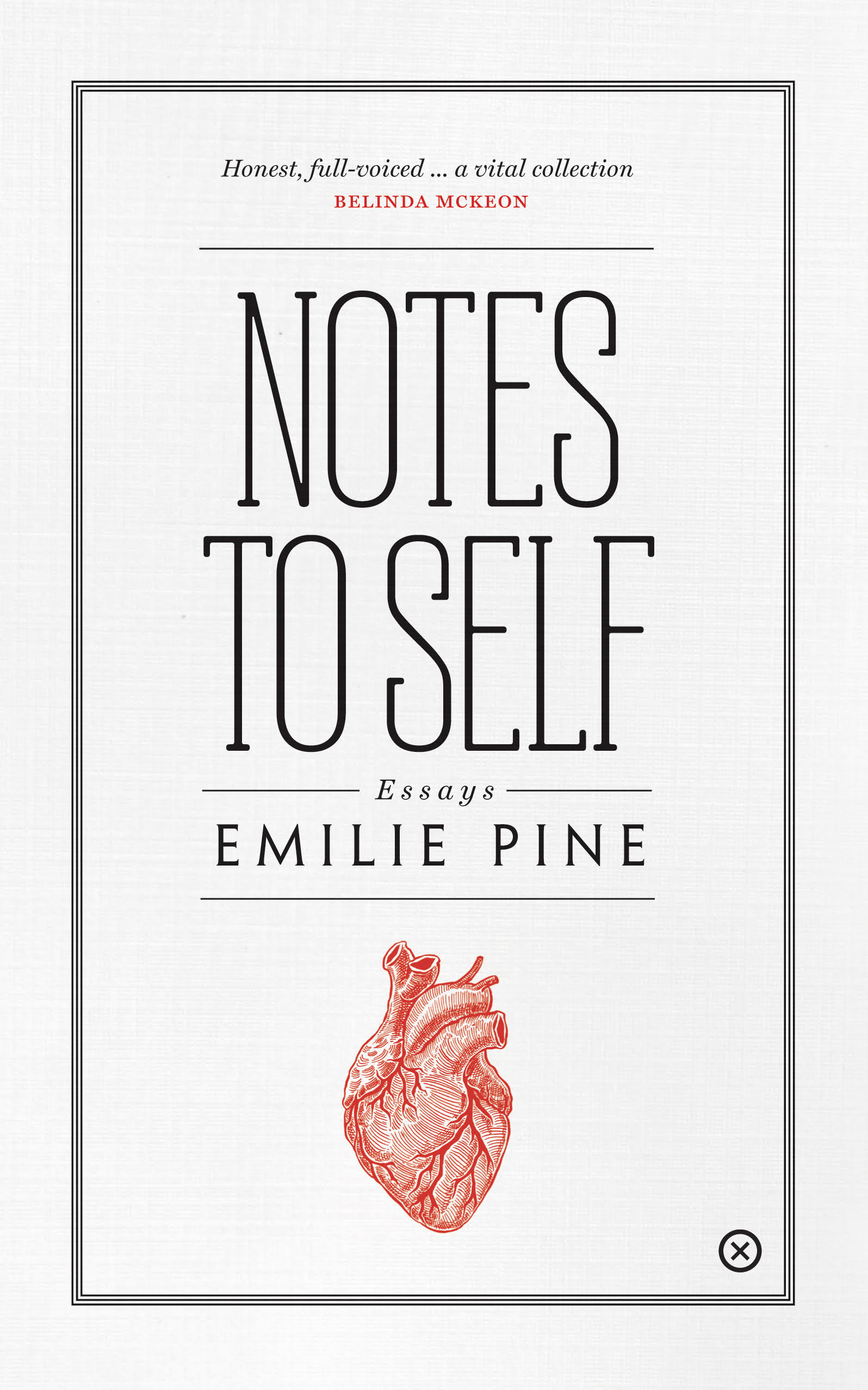