Camas Davis’s new book is already being compared to Elizabeth Gilbert’s Eay Pray Love. Also a story of one woman’s pilgrimage in the aftermath of life crisis, Killing It describes moving to France to learn the art of butchery, and in the process, finding oneself.

Camas Davis’s first book, Killing It, opens in an abattoir in Gascony, France, the scene that of a seven hundred pound pig being killed. “This felt to me like a private moment that I shouldn’t be allowed to witness, these last shudders of life, this battle waged by her body’s nervous system, but I did not turn away,” the author writes.

Davis, having been fired from her job as a magazine editor in Portland, Oregon, America, and then ending a decade-long relationship with a man she had thought would become her husband, makes the impulsive decision to travel to France to learn the art of butchery. She contacts a woman she had once met through a friend, Kate, who lives in France, and asks “Do you know anyone who could teach me how to butcher a pig?”

Nonplussed, Kate replies “Of course you want to come to France to learn butchery. Of course I will help you.” There are further promises to feed and house her for a nominal fee in the teaching guest house she runs for tourists in Gascony, to take her to markets, introduce her to goat’s cheese makers and bread bakers, and to a family of pig farmer and butchers, the Chapolards.

In the aftermath of her life combusting around her, aged thirty-one, Davis’ pilgrimage is in part about tearing down everything she knows about life, everything she had learned as an urban based journalist, in order to get back to some sort of elemental truth.

“Sometimes we must climb up to a high perch and dangle our very identity – everything we’ve deemed certain and continuous and reliable and safe in our lives – over the edge. We must open our hands and let go of all of it, and then listen for the awful sound it makes when it hits the ground. Only then can we go in search of meaning.”

As a food journalist, she realises she does not know where the meat she is eating has come from. France will teach her that, and so much more.

Before being fired Davis was burnt out, depressed, drinking heavily and only sleeping with the aid of medication. On leaving her long-term partner, she had moved in soon after with another man, a relationship she describes ominously; “I knew his love for me greatly outweighed my ability to love anyone, including myself.”

Having grown up in the countryside, “hunting and fishing in the relative wild,” the trip to France is in answer to a longing she feels to re-engage with that wildness, and the countryside of her childhood. Envisioning a reinvention of the self, she craves work of the kind her childhood community did before urban sprawl killed such things; building their own houses, fixing their own cares, growing their own food.

The first half of the book depicts Davis’s trip to France; seven weeks living with Kate, working with the Chapolards on their family run farm. The brothers and their wives manage the entire process, from growing the food with which to feed the pigs, to killing, carving and ultimately selling at market. For anyone who has ever had even the most glancing passing fantasy of running away to France, this is heady stuff. On meeting her host’s circle of friends and acquaintances, she notes: “They were Kate’s extended French family, a family perpetually sitting down to an ever lasting meal together.” While there is work, it is deeply satisfying work. And there are also meals, long, leisurely meals, and post meal naps in hammocks, aperitif hour, bicycle rides, and market days.

America does not come out well in this narrative, placed as it is in stark relief against the way of life Davis finds in France. Back home, she had knelt on the office floor listening through the air vent to her former boss bitch to the magazine’s publisher about her. Here, the Chapolard family take an absolute punt on this complete novice, and she absorbs their warmth. Where the French spend more time eating than Americans, they do so moderately, never stuffing themselves. “We are so very hungry, but never sated,” Davis observes of her fellow Americans.

The latter half of the book sees the author back in America, attempting to use what she has learned in France to forge a new career path for herself. Re-entry to real life is unappealing, returning to “all the reminders that my life had not turned out the way it was supposed to.”

Will she be able to incorporate what she has learnt in France into creating a new life for herself in America? As a carnivore she is met with some resistance, compared to Nazis, and told her work is unfeminist.

Ultimately, she establishes the Portland Meat Collective, a meat school, the details of the establishment of which take up much of the latter part of the book, alongside Davis’s own romantic travails, as she begins seeing two people; Jo, a fellow woman working in the mostly male world of butchery, and Andrew. Life becomes, for a time “the subjects of racy novels and lurid soap operas,” and indeed Davis’s writing is at it’s most gripping in the early parts of the story, when recounting her time in France.

You will ideally want to read this book with maybe a glass of wine and some bread and cheese to hand. Food has been personified here as one of the main characters, so vividly is it described. Meat has a “deep, dark, elementality.” Foie gras provides an “opening onto an inordinate plane of complexity.”

Killing It has been compared to Elizabeth Gilbert’s Eat Pray Love,  a sort of Meat Pray Love. Both are in the mould of woman-ends-relationship-and-goes-on-journey, both actual, and of the mind, in order to reinvent herself more authentically.

Davis’s writing is satisfyingly unflinching, whether it is in describing the process of cutting open a pig, or opening the book of her own life; being fired, relationships. In writing about her own struggles, she often manages to get to a more universal truth of things.

In doing so, she also presents a celebration of a simpler, truer way of life. Repeatedly she refers to the manner in which work you love grounds a person, bringing them entirely into the moment. Butcher here  becomes a most earthy, no-nonsense form of mindfulness. 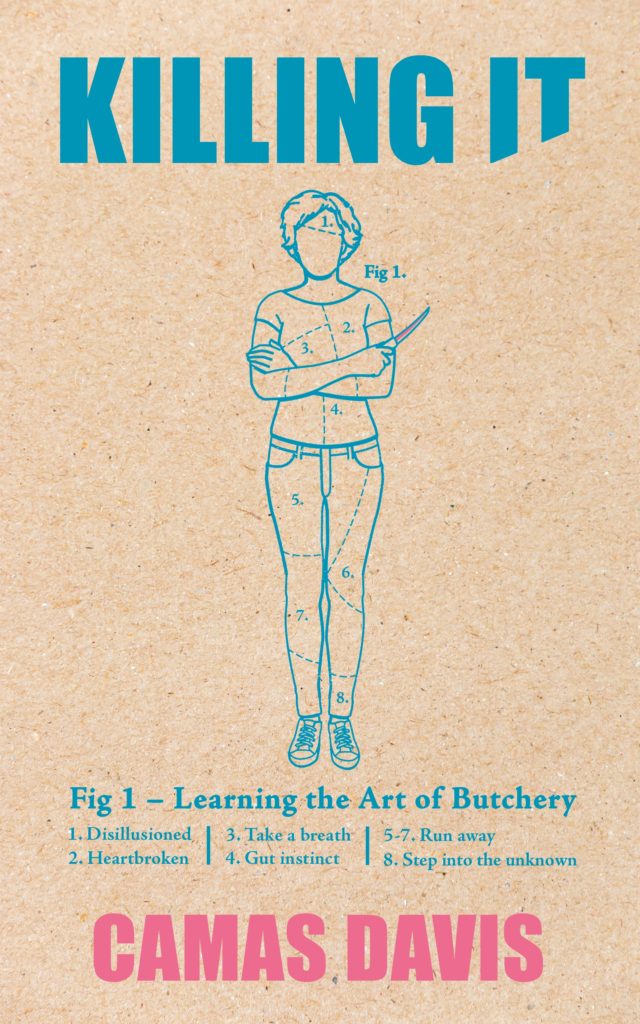