‘Tis the season of festive cheer, and asides from looking forward to over-indulging in incredible food and family togetherness (joy), Christmas shopping is about to get into full swing. And obviously, retailers will be hoping their holiday advertisements will catch your eye, thus persuading you to spend your hard-earned wages under their roof.

However, one major US retailer took the concept of an ?eye-catching? ad way too far, and for good reason it has sparked outrage online. Bloomingdales featured the following ad in their December catalogue: 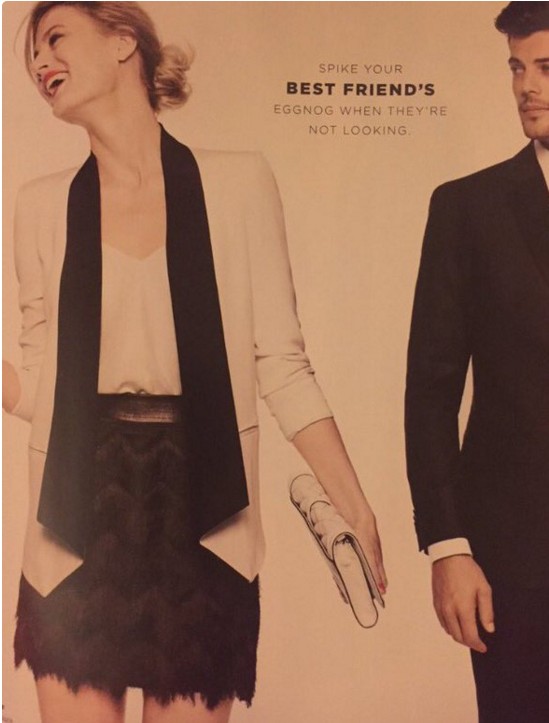 Not only does the caption read, “Spike your best friend’s eggnog when they’re not looking,” the text is positioned between a woman and a man, with him giving her a suggestive, sidelong glance while she’s turned away.

The ad was met with fury, with many suggesting on social media it was ?encouraging date-rape?:

And basically, this is what the ad and its accompanying text imply. Bloomingdales are not only suggesting that spiking a drink is okay; the advertisement effectively encourages it. The fact that any retailer could print such an ad at all is outrageous. What sort of company gets behind such a message? And how do they think that anything like that could be taken in jest? (One has to assume that was their original intent). Of course, the PR machine could be at hand here. If they have indeed done this to drum up publicity, it is scary, in extremely poor taste and simply, unacceptable. The backlash was such that the company made?this (decidedly mediocre) apology:

We heard your feedback about our catalog copy, which was inappropriate and in poor taste. Bloomingdale’s sincerely apologizes.

But they do not explain their reasoning behind publishing such an ad in the first place, leading many (us included) to baffle how it ever came to pass.

This ad is a far cry from the anti-rape campaign (which used the concept of tea to explain consent) published only weeks ago, which was met with such positivity.

We know shock value advertisements make a statement, but promotional material even suggesting the concept of spiking anyone’s drink’should never, ever be encouraged or published.

If you are affected by any of the issues covered in this article, contact the Dublin Rape Crisis Centre 1800 77 88 88 / drcc.ie