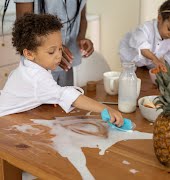 A hard-working actor and writer, Hilary Rose has enjoyed a varied career, appearing on RTÉ’s Republic of Telly and The Fear, but it’s her role as Mairéad in the hit comedy-drama The Young Offenders that has allowed her and her husband, Peter Foott – the show’s writer and director – to enjoy a happy work/life balance in their native Cork. Here, she talks about season two, and life as a very busy working mother…

“I think season two of The Young Offenders might just be better than season one,” laughs Hilary Rose. “The film set up all these characters, and then season one developed them further, but season two is just so much fun. You know the characters now, you understand them, so you know that every episode is just going to be absolutely ridiculous. There are loads of lovely guests in there as well, which will be a nice surprise for people. In one episode, there’s a scene in the school with all of us in it, and once you see it, you’re never going to unsee it. And in another episode, there’s a fight scene that you won’t see coming – it’s hilarious; it’s really, really funny. I think every episode has something like that, those iconic moments.”

The Young Offenders first got viewers’ attention when hit cinema screens back in 2016. Then there was the TV show, which aired on RTÉ2 at the start of 2018. Word spread about the hilarious Cork production, and next thing you know, everyone was asking when season two would be ready to air. The show is written and directed by Rose’s husband, Peter Foott, and filmed in Cork, where they both now live happily with their two small children, Jake, four, and 11-month-old Olivia.

“The writing is always the building block of good TV and film. I’m a writer as well, and I always think, if you have the building blocks right, your house will stand up; if you don’t, your house will fall down. Peter did an amazing job on the film and season one, and he did it again for season two, and it’s just such strong writing, it really is. And the characters are so well developed that I think it all starts there. And then you throw together a cast that is phenomenal – they are really, really great people that have become great mates – and once you put all that together and then a crew that is just so dedicated and amazing to work with… When you throw them all together, even on difficult days, they make it so much easier because everyone’s in it together. It’s just a really special thing. My co-star PJ Gallagher and I have worked on plenty of productions before, whereas the lads – Alex Murphy, who plays my son, Connor; and Chris Walley, who plays his friend Jock – were really just getting started in their careers, so PJ and Orla [Fitzgerald, another co-star] and I always say, ‘Wow, this is really something special.’ I don’t think the lads fully realise it.”

So what’s it like working together on such a creative and high-pressured project? Is it collaborative? “Peter and I used to work together in the early days. With The Young Offenders, I just wanted to do my job as an actor, and he wanted to do his job as a writer/director; but inevitably, we talk about [the writing]. Peter and I have been doing this for the last five years together, and longer – before The Young Offenders, so inevitably we talk about it nearly every day; he’ll say, ‘So what do you think about this?’ And I’ll say, ‘Oh, yeah, okay, but why don’t you do it like that?’ But at this stage, it’s not even just me that does that – a lot of the actors will chip in and go, ‘What about this?’ Even on the day, we improvise quite a lot, which I think brings an added element to it, that really brings the script to life. So yeah, it is collaborative.”

The two moved back to their native Cork to set up their own production company, and start a family – something Rose feels especially fortunate to have been able to do. “We came back to Cork before The Young Offenders even started, so that was always our plan. We spent a long time in Dublin, and loved it dearly and still do; but we’re both from Cork, and we wanted to settle down and start a family here. That was our game plan – to come back and bring the industry to us essentially. We have our own production company, and The Young Offenders was our first hit. Our kids are very small at the moment, so they’re not being dragged here, there and everywhere – we’re able to work and come home to them, so we’re really lucky we can do that. We do 70-hour weeks when we’re working, so it’s still tough, but at least we’re doing it all here. We’ll catch up on our sleep someday! We try our best to structure life so that our weekends are just family time and that’s it, and we’ve got a really nice holiday planned around Christmas time, which I think all four of us deserve.”

What’s it like working with one’s spouse and how does the couple manage to keep work and family life separate? “It is tricky, but I think we kind of ironed out our differences in the early days – you just have to because it is a professional production and you have to get over any differences you might have had at home. I think one rule that we try to stick to – which doesn’t always work – is to come home and not talk about work. Just to try and come home and talk about normal things, like our kids or the house or what we need to do; try to keep our lives as normal as possible. It’s tricky working with your spouse – I’ve spoken to other people who’ve done it as well and once you speak to somebody who has worked with their spouse, there’s a look in their eyes, you can tell, and go, ‘Yeah, I get that look, I understand that.’”

So what else does the star have in the pipeline? Any projects we can look forward to in 2020? “I’ve got a couple of projects on the go. Obviously, they were kind of all on pause while we were filming, so I’m just taking a bit of a sabbatical and getting back to them now. I’ve got a feature film and a series that I’m writing, and a few other little bits, so there are a couple of really nice things that I’m developing at the moment. I think it’s going to be an exciting couple of years.”

With Christmas approaching, how does she plan to spend the holidays? “Catching up with family, friends and chilling out! Last year, I had just had Olivia two weeks before Christmas, so we spent it on our own. It was really nice because it was our first year in our new house, with our family all together. I’m not really sure what we’re doing this year. We go between Peter’s parents and my parents. I like to spend half a day at home – I think it’s really nice to be in your own home on Christmas, with the tree up and the fire lit, and fluffy socks on.”

Season two of The Young Offenders airs tonight at 9.30pm on RTÉ2. Do. Not. Miss. It.