In a new Irish documentary Full Colour: An Irish Street Art Story director Harry Moylan shines a light on the power of street art to inspire the nation as he introduces us to the key men  – and women – leaving their mark on the streets of Belfast and Dublin.

“I wanted to make something that was relevant to all of Ireland,” says Harry Moylan, the Dubliner who has just released a brilliant 35 minute documentary entitled Full Colour: An Irish Street Art Story. Back home in Dublin since February, Harry was living in Brussels for the past three years, working in political communications for the EU. With a background in web design and a masters in Multimedia, as well as a politics degree, Harry was keen to produce his own creative project.

Street art is art at its most democratic; it’s there, open to all and free for all

Harry began to research the project about 18 months ago. At the time Brexit and the Irish border were up for debate and that was the chief issue on his mind. Chatting to a friend, the idea of political murals came up as a way to tell the story of two cities – Dublin and Belfast – through the eyes of their street artists.

“I wasn’t actively looking for the political angle,” continues Harry, “but public art almost always reflects the zeitgeist of the time. Street art is art at its most democratic; it’s there, open to all and free for all. After spending 18 months making this film, the singular thing I came away with is how much positive energy murals inject into a cityscape.”

Harry also found the artists themselves to be an incredibly open, positive and friendly bunch. “I made contact with most of the artists through Instagram, and without fail each person responded and was so generous with their time.”

It’s interesting that while the world of street art and graffiti might be considered a male-dominated and intimidating, out of the 10 artists that Harry features in the film, four of them are female.

I don’t want to be seen as some token female. I want to be here on my own merit

“It is fair to say that it is a male-dominated scene,” says Sligo-born but Bangor-based Friz in the film, “that doesn’t mean that it’s not female-friendly. I haven’t found it a barrier at all. When I started out it was only guys I was painting with, showing me the ropes, techniques, helping me out. That said, I don’t want to be seen as some token female. I want to be here on my own merit.”

It takes a lot of courage to work in such a public way, and spray paint is difficult to control at first. The margin for error is low; there’s no Ctrl+Z on a spraycan

Looking at Friz’s work, her talent speaks for itself. Last year she travelled to Ankara in Turkey, in conjunction with the British Council Northern Ireland, to create a mural inspired by women with disabilities. “Painting at the Ballina Fringe Festival last year was also a highlight,” she continues. “It involved creating two community murals, one with the local Men’s Shed – total sweethearts – and the other with young people from Involve Youth and Youth Work Ireland NM, who were so into the process. I also got to create one of my biggest murals to date based on a local Táin story, pictured above.” Friz’s work is evocative and beautiful, influenced by the female form and Celtic mythology.

See it to be it

I think if I was a young girl, and saw another girl painting happily on a wall, I might have considered it earlier

Dublin-based Holly Periera was 35 when she first started using spray paint. “I never thought of painting on walls when I was in NCAD, or even in the decade after I left art college. I’m not sure why, maybe I was a little intimidated – it takes a lot of courage to work in such a public way, and spray paint is difficult to control at first. The margin for error is low; there’s no Ctrl+Z on a spraycan.

“I think if I was a young girl, and saw another girl painting happily on a wall, I might have considered it earlier. I’m delighted that there seem to be more women painting murals in Ireland right now; most notably Epoch Collective, who do some fresh and amazing design-led work in the city.”

Holly’s style is bold and brilliant – with typography placed front and centre. Her murals focus on shape and colour, with Eastern European folk art influences often seen weaving their way through. In the film, you’ll see Holly working on her ‘Spinster’ mural above.

“When I paint murals, no matter how detailed or complicated the design, people talk about the colour. Colour is the thing that draws a viewer into the work. This understanding has changed my process. Now I start with a sketch and a palette, and build the design around how best to showcase the colours. I consider the tensions or compatibilities that the palette can create to best effect.”

Holly and Friz are both proud members of the Minaw Collective – an all female group of Irish-based street artists. “I was invited to contribute to a female exhibition in White Lady Art Gallery back in 2014,” says Friz. “I had met some of the other artists previously and painted alongside them at various events, so we started a group chat in advance and discussed the idea of a female collective which came to be off the back of the exhibition. Because I am based in the North I don’t get to contribute that often but it’s great to be part of a network that shares ideas and opportunities with each other.”

Holly agrees, “I was introduced to the collective by the street artists Novice and Signs of Power. They were both really generous with their time and knowledge. Through them I met the other members of Minaw. Being a part of Minaw means so much to me. It’s so empowering to be part of a group of like-minded people to exchange ideas and share the experience with.”

The last quarter of the film is dedicated to the Minaw Collective, as Harry spends the afternoon with them in Dublin at the Bernard Shaw pub. Watching them chatting, listening to music, buzzing in each other’s company and creativity it’s clear to see how strong the bonds are. 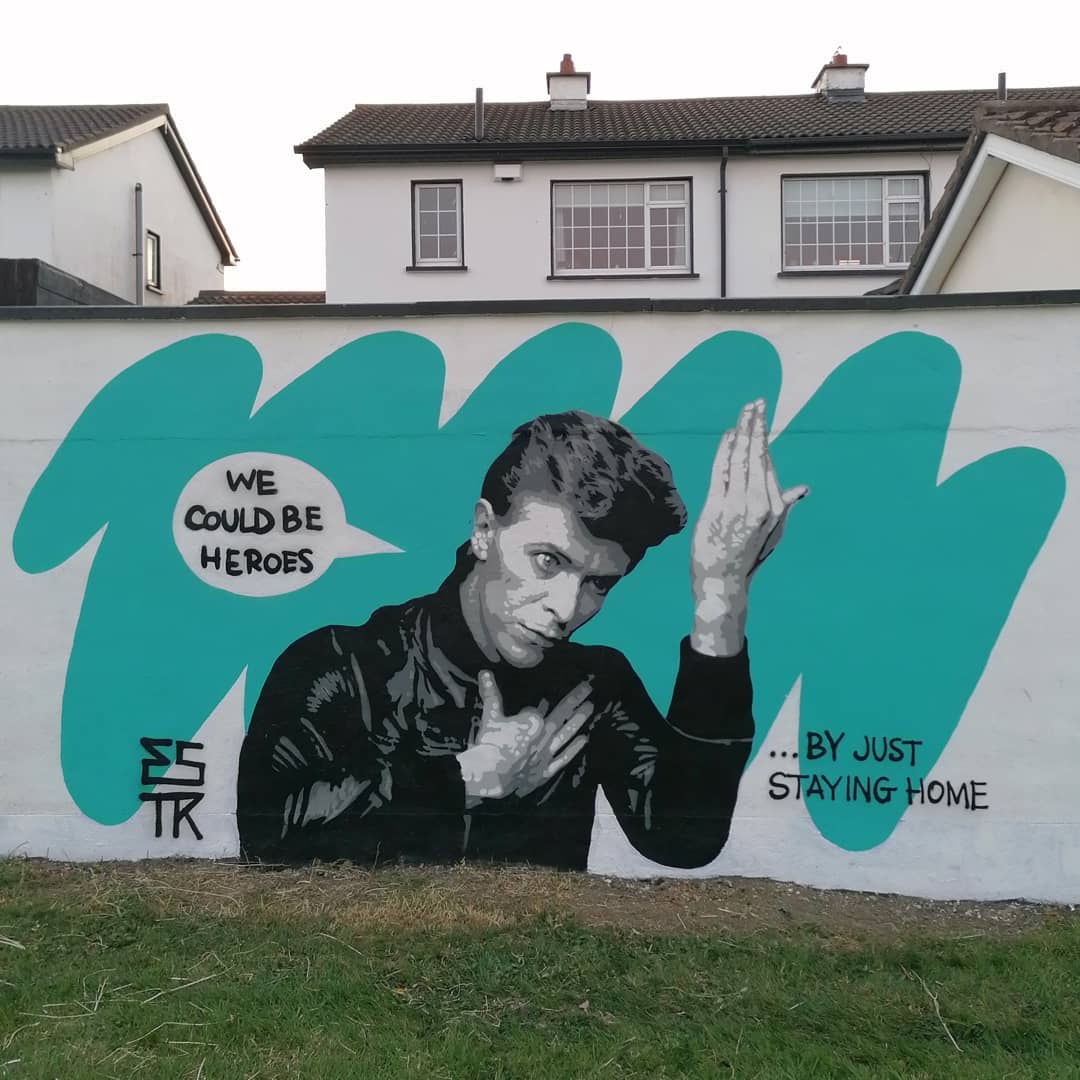 Capturing, and lifting, the mood

The recent success of Richard Seabrooke’s emotive and beautiful film and the “Heroes” mural outside St James Hospital he made in collaboration with Cormac Dillon of Mack Signs, highlights how powerfully street art is reflecting the mood of the nation right now.

“I was proud to take part in the Creatives Against Covid-19 fundraiser for families facing domestic violence,” says Holly. “On a smaller scale, but no less impactful, many independent artists are creating work to raise money for charities, like One Strong Arm’s gorgeous letterpress prints, with funds going to Focus Ireland.”

Considering so many freelance artists are experiencing their own Covid-related financial difficulties right now this generosity is remarkable and once again highlights the vital role art plays in lifting our spirits and inspiring us in times of crisis.

Read more: WATCH: this emotive Irish video shows how important it is to #stayhome