Is the current wave of feminism losing supporters due to polarisation?

The meaning of feminism is becoming over-complicated, leading to younger women throwing in the towel on the term altogether, Sophie White explores the recent backlash against the movement

I’ve never had any cause to question whether or not I am a feminist. To me growing up, it all seemed very simple and straight forward. Did I believe men and women to be equal? Yes. End of.

My feminism was inherited from my mother and father, as immutable a fact as any other genetic attributes they bestowed. Like the colour of my eyes and my ability to roll my tongue, my feminism was such a material part of me, it required little to no conscious investigation and I never felt discomfited by it.

Until, that is, I realised the feminism that fit like a second skin and felt so right and reasonable was at odds with the world I lived in.

I remember the moment I realised this. I was nine It was the summer my friends and I discovered Grease.

(Here’s where someone in the comments presumably writes “Feminist killjoy wants to ruin Grease ffs”!)

We watched Grease over and over at my friends’ house, we knew all the words, we re-christened our gang the Pink Ladies and we were obsessed with Sandy and Danny.

My mum discovered our passion for Grease and was seriously disturbed. She told me she didn’t like the film and didn’t want me to watch it anymore. I was baffled.

“Because I don’t like the movie’s message,” she explained. “Why does Sandy have to change herself for Danny?”

I was stumped. This hadn’t occurred to me at all but now that she said it, it did seem unfair.

“No woman should ever change herself or do anything just to please a man,” my mum concluded.

This conversation has stayed with me for more than 20 years and she probably doesn’t even remember it but it was the first time I truly understood the work women have been doing for centuries to push back against the all-pervasive message that we are inferior. The message that has infiltrated every sphere of human life and endangered women on a mass scale. Feminism, in this light, is simple. Equality for all. Less murdering, abusing, mutilating, degrading, disregarding, silencing and shaming women. Yes please. However, as each new generation has had its way with it, feminism has become…. complicated.

More and more women report feeling alienated by some of the fourth wave’s more hardline proponents.

Now, my mother and I have debates about ever more complex and esoteric aspects of the movement’s trajectory. And because no one’s feminism can be completely harmonious and exactly aligned, we argue. We argue points that my generation are perhaps more preoccupied with than her’s was. They are issues like diet culture, period poverty, consent and sexual harassment, that we have the time and energy to dismantle because of her generation of women. Because those feminists got the Pill and abolished the work ban on married women and eventually achieved seats of power in boardrooms and governments, we can dig deeper and further excavate the crimes of a culture formed over years and years of female oppression and, often, out and out erasure.

And here is where the current wave of feminism is suffering an identity crisis and seemingly causing women to splinter into ever more fractious factions. More and more women report feeling alienated by some of the fourth wave’s more hardline proponents.

Related: How one speech by Chimamanda Ngozi Adichie brought feminism to the masses

Journalist, Jennifer Simpkin compared contemporary feminism to Mean Girls in a 2014 piece for the Huffington Post which begins “Raise your hand if you have ever felt personally victimised by a feminist.” It was the same year that a Facebook group called Women Against Feminism had a moment with their #Idontneedfeminismbecause trending on Twitter.

The hashtag prompted women in the group to post pictures of themselves holding signs explaining why they felt they didn’t need feminism. It felt like a very shouty year in feminist circles with many women dismissing the Women Against Feminism’s point of view as ignorance, while the other side accused the feminists of everything from man-hating to becoming nearly as oppressive as the patriarchy.

If a man chooses to exploit his sexuality, it’s not considered a blow to the male cause, but if a woman does so, it’s supposedly damaging centuries of progress.

Contemporary feminism can seem more prescriptive than previous waves because as we unpick each layer of the debate more issues are thrown up. It is like a many-headed hydra, as we slay each tenet of the oppressive, misogynist status quo another immediately grows to take its place.

Take, for example, the question of cosmetic enhancement. Arguably the feminist movement fought for the right of women to have autonomy over their bodies. All good, right? However, how does this desire to conform to mainstream – ie male-driven – beauty standards jar with our feminist ideals? Damn you evil Hydra of Feminism! 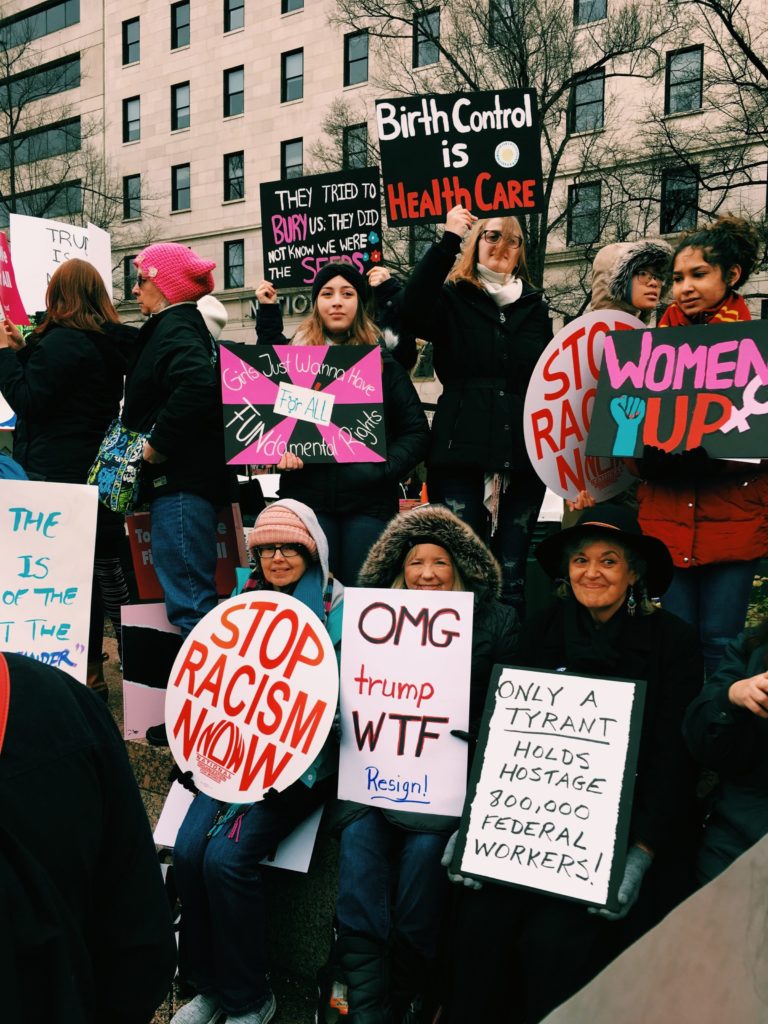 One kind of oppression for another

Polly Vernon’s book, Hot Feminist, and Roxane Gay’s Bad Feminist each took on this conundrum to mixed reaction from fellow feminists. And look, maybe some of those women, as Vernon in particular reported, were being dicks about it – feminist or not we are all capable of assh*le behaviour – but most reasonable people can surely see that there is no hierarchy of feminist beliefs without diminishing the viewpoints of others.

The movement has to be willing to listen or it doesn’t work. The internet is awash with think pieces debating the feminism (or lack there of) of the Kardashians. If women in the public eye disagree they are deemed to be “unfeminist” or “tearing each other down”. If a man chooses to exploit his sexuality, it’s not considered a blow to the male cause, but if a woman does so, it’s supposedly damaging centuries of progress.

Feminism to me is a living movement, always expanding, contracting, morphing, growing, twerking and flossing.

It is an extremely pesky catch 22 that, as women, our every move is politicised. It’s a fairly major burden and can feel like we have traded one kind of oppression for another, if we choose to see feminism as one unyielding morass of definitive conviction. Personally I do not. Feminism to me is a living movement, always expanding, contracting, morphing, growing, twerking and flossing.

The best we can hope for is progress over perfection regarding contemporary feminism. In previous generations, the oppression of women of colour for example was demoted in the feminist agenda and it is only now that this is beginning to be rectified. The fact is it is a human movement with human problems. Demanding unanimous agreement from such a sprawling movement that, depending on geography, political and even pop culture, will be grappling with wildly different ideological terrain, is futile. It simply cannot work.

as long as we are all still arguing politely and even more crucially, listening, then at least the feminist agenda is still vital and evolving.

Contemporary feminism isn’t immune to the current political trend for polarising polemicism. We, humans, crave black and white, grey areas are uncertain and uncomfortable for us, we want definitive answers however feminism will always need to occupy this frustrating grey area. There is simply too many of us debating what is and isn’t feminist. However, as long as we are all still arguing politely and even more crucially, listening, then at least the feminist agenda is still vital and evolving.