They have a history of argy-bargey. But the teenage climate activist truly got the boot in as she trolled the former US President one last time.

“He seems like a very happy old man looking forward to a bright and wonderful future. So nice to see!”

The cheeky tweet came from Thunberg yesterday on Twitter under a picture of Trump boarding a helicopter.

The reference comes after the 18-year-old repurposed a condescending comment Trump made about her after she cried during a speech to world leaders at the UN climate action summit in New York.

At the time, he tweeted that the Swedish climate campaigner was a ‘very happy young girl looking forward to a bright and wonderful future’ 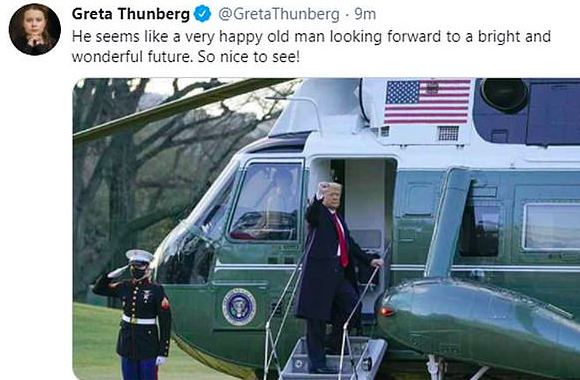 This wasn’t the first time the pair had clashed.

In 2019 after Time magazine named Greta its Person of the Year, Donald Trump took to social media to tell her to “chill”. 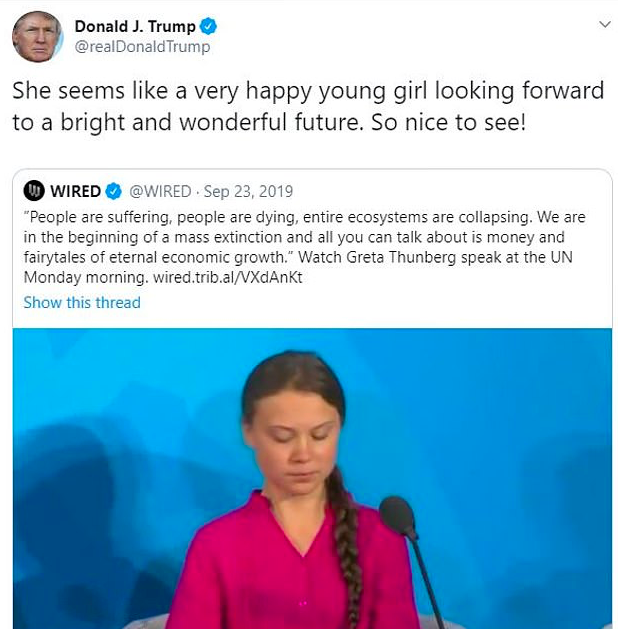 ‘Greta must work on her Anger Management problem, then go to a good old fashioned movie with a friend!’ Trump wrote in a tweet.

Quick as a flash, Thunberg’s bio on Twitter was immediately updated to “A teenager working on her anger management problem’ and ‘currently chilling and watching a good old fashioned movie with a friend.’

Like many other environmental campaigners, the young Swede had criticised Trump’s climate policy which included a withdrawal by the US from the Paris Climate Agreement.

Yesterday, Joe Biden was sworn in as the 46th president of the United States. One of his pledges is to rejoin the International Treaty via an executive order in the coming days.

But it seems now that Trump’s Twitter account was suspended, she may just have an unfair advantage when it comes to dragging the Apprentice star.

Then again, all’s fair in love, war, and politics… and using his own words against him in the context of his departure from Washington, is pretty hard not to applaud.