During the pandemic, she released the sunscreen that might finally convince those who hate sunscreen to wear it, and the only high heels people have been interested in buying since March.  She is the founder of Fenty Beauty, the beauty brand that singlehandedly spotlighted the lack of inclusivity in the industry and rumbled a lot of brands for their lack of diversity. Because of her, the game has changed: the industry standard for a new foundation launch is 40 shades or none. Fail to match Fenty numbers and prepare to be shredded online by beauty fans.

She’s got a pretty heavy roster of movies under her belt, from heist film Ocean’s 8 to military science fiction movie Battleship.

It’s easy to be a celebrity who is great at one thing and then branches off into twenty different directions for a quick cash grab. Rihana could have sold a crappy perfume or a rubbish celebrity rosé or even had a ghostwriter pen her autobiography. She’s inspired a tsunami of celebrities to release their own beauty brands, which have never had the same level of global adoration because here’s the thing with Rihanna; instead of lobbing her name onto anything she can mark up, she’s been taking down industries that haven’t evolved from outdated ideals and values.

She’s even done it with brands that have been household-name leaders at the forefront of their industry for decades. Take lingerie for example. This week, Rihanna once again put Victoria’s Secret to shame with her Savage x Fenty show (oh, forgot to mention, she’s also created the only lingerie brand that doesn’t make you want to punch yourself in the face).

For many years, millions watched as one, narrow, homogenous prototype defined an American ideal of sexiness that spread across the globe and turned insecurity into profit. When Victoria’s Secret refused to step into the 21st century, Rihanna once again stepped up to the plate, delivering Victoria’s Secret it’s final blow to their downfall with her first lingerie fashion show, an instant sensation for diversity in casting across race, body types, age and gender identity. 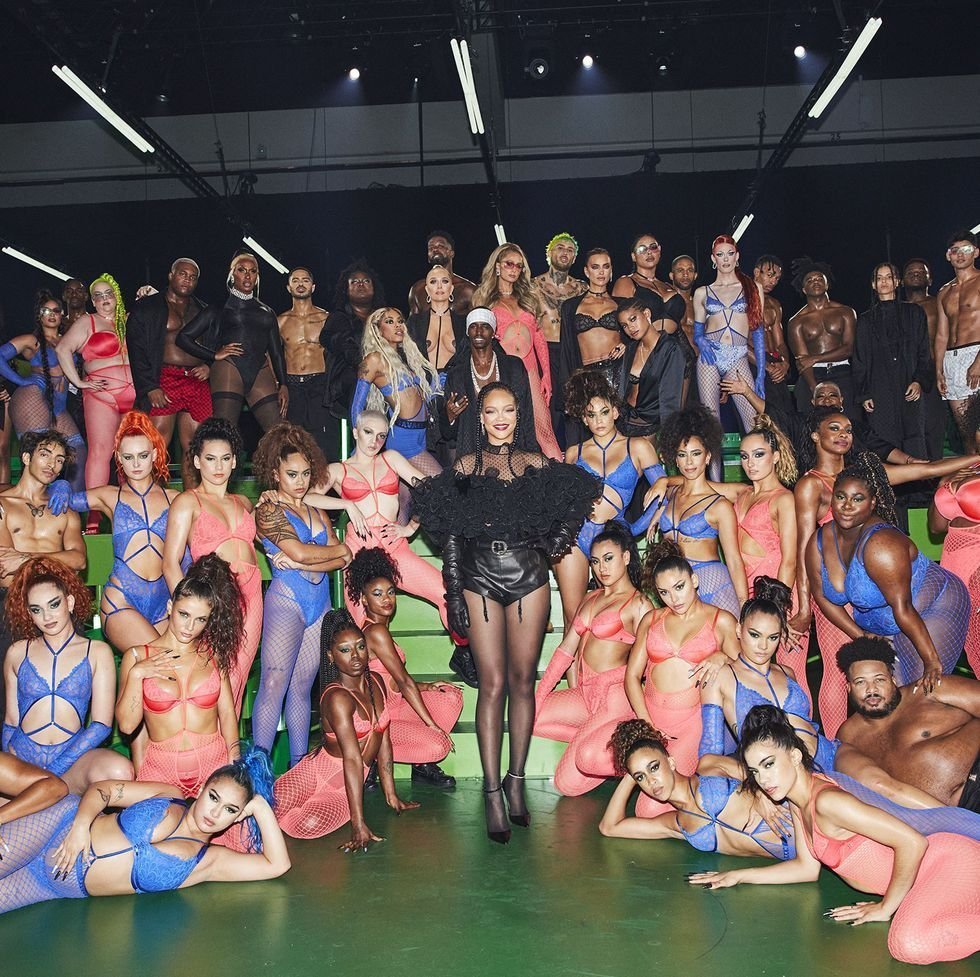 In her Savage x Fenty show this week, Rihanna has turned her attention to hegemonic masculinity and the narrow, marginalised and damaging view of what can be constituted as sexy for men.

After her inclusive lingerie fashion show, Rihanna’s lingerie collection landed online, including a new range of boxers modelled by plus size men. These photographs have since gone viral, with men online expressing the confidence and emotions the campaign has given them.

“This is the first body inclusivity for men I’ve ever seen,” says one tweet that has been liked more than 383,000 times.

Never in my adult life have I seen a male model that has a similar body to mine. I feel… almost emotional? Like I finally can buy something I saw and want and KNOW it was made for people like me in mind ?

And I was not ready

To see a bunch of people finding someone built like me really attractive.

So I’m having some feelings about this at the moment.

I just realized i have never seen a male model with a body type close to mine that wasn’t there as a joke. Seeing this made me really happy. They even kept the stretch marks.

Men have been left out of the body positivity movement, with Freddie Flintoff’s recent documentary on his decades-long struggle with bulimia highlighting the additional shame around suffering from what’s been labelled a “woman’s issue.” Men don’t have much in the way of representation when it comes to body positivity, bar a brief and sexist fetishisation of the “dad bod” (visually represented by Leonardo Di Caprio, not a man I think any of us would label as plus size) so seeing them grapple with the emotions of seeing their bodies represented positively proves that men have been entirely left behind in the conversation.

The model Steven G has spoken on Instagram about the apprehension he had about going shirtless online. “I was extremely hesitant the moment my agency confirmed but something in me knew I couldn’t let this opportunity pass me by,” he wrote. “I thought this was for me but this is for every guy built with some extra meat, that unbuttons that bottom button when tryna avoid the crease, that has to shop around like crazy cause the sizes for us are already gone but we sauce up a fit and still flex the drip. We here, we are sexy, and we are the wave. And don’t let nobody tell you that you aren’t!”

It’s always felt like a massive business failure to me, not to show how great someone that looks like your customer looks in the clothes you’re trying to sell them.

While women’s body positivity has still barely scratched the surface, the outpouring of shock from men online highlights again that being given permission to exist in your body with confidence is a conversation that men don’t yet have the language for and needs to be amplified at every opportunity, just as it does for women.

Thank you Rihanna, for showing us body representation actually worthy of wings.

Read more: Everything you need to know about Fenty Skin, Rihanna’s foray into skincare

‘I didn’t realise that men could even get postnatal depression’