In the latest of a long string of collaborations, Tommy Hilfiger has teamed up with British designer Martine Rose for a fresh new take on preppy streetwear; a contradictory teaming, that somehow just works.

Shot in the suburbs of Miami, Florida by renowned photographer Buck Ellison, the new campaign is an ode to American subculture that both celebrates, and spotlights marginalised communities. Featuring a diverse range of couples in classic domestic settings, the aim is to redefine the traditional idea of 90s Americana.

Founding her own eponymous menswear label in London back in 2007, Rose has grown and cultivated an internationally-recognised brand lauded for its underground, cult credentials.

Known for hero items that play on proportion, silhouette and texture, her designs are radical and unconventional – the opposite of Hilfiger’s more timeless, collegiate approach to fashion. But, the pairing is oddly complementary. 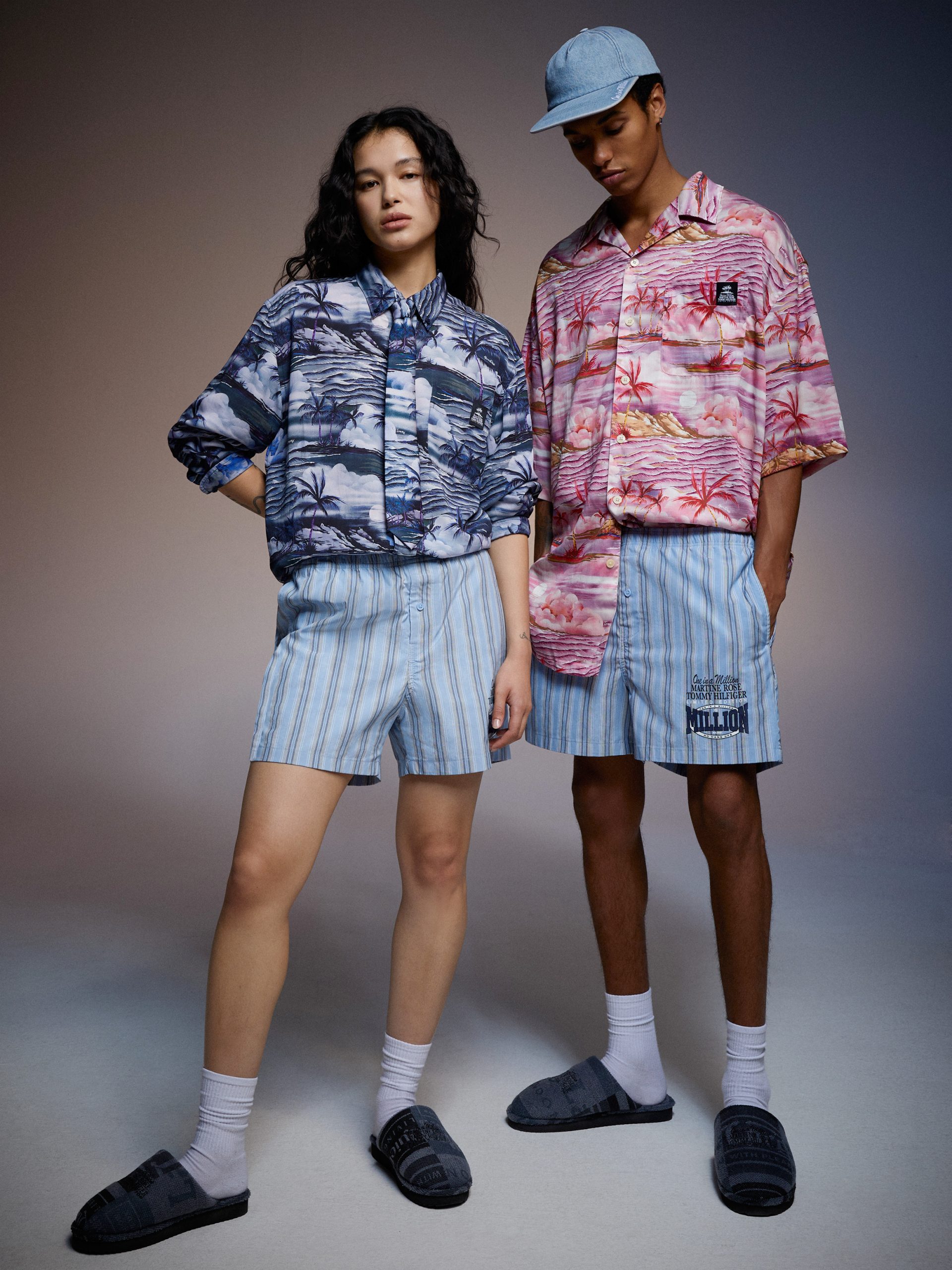 Born from a mutual affinity for sportswear, the new line comprises 25 different wardrobe essentials that put a new spin on both brands’ aesthetics. Inspired by archival Tommy Hilfiger icons from the 90s, it’s a powerful play of colour and graphics with exaggerated silhouettes and proportions helping to give it that cool, urban appeal.

Key items in the collection include the varsity jacket, hoodie, and puffer and robe-coat – all of which have been remixed with pop details, over-dye finishes and Martine’s signature tongue-in-cheek patterns.

“Collaborating with Martine has been inspiring and really pushed me creatively,” Hilfiger said of the new collection, adding, “I love it when a designer can come in and put their own touch on our archival pieces.” 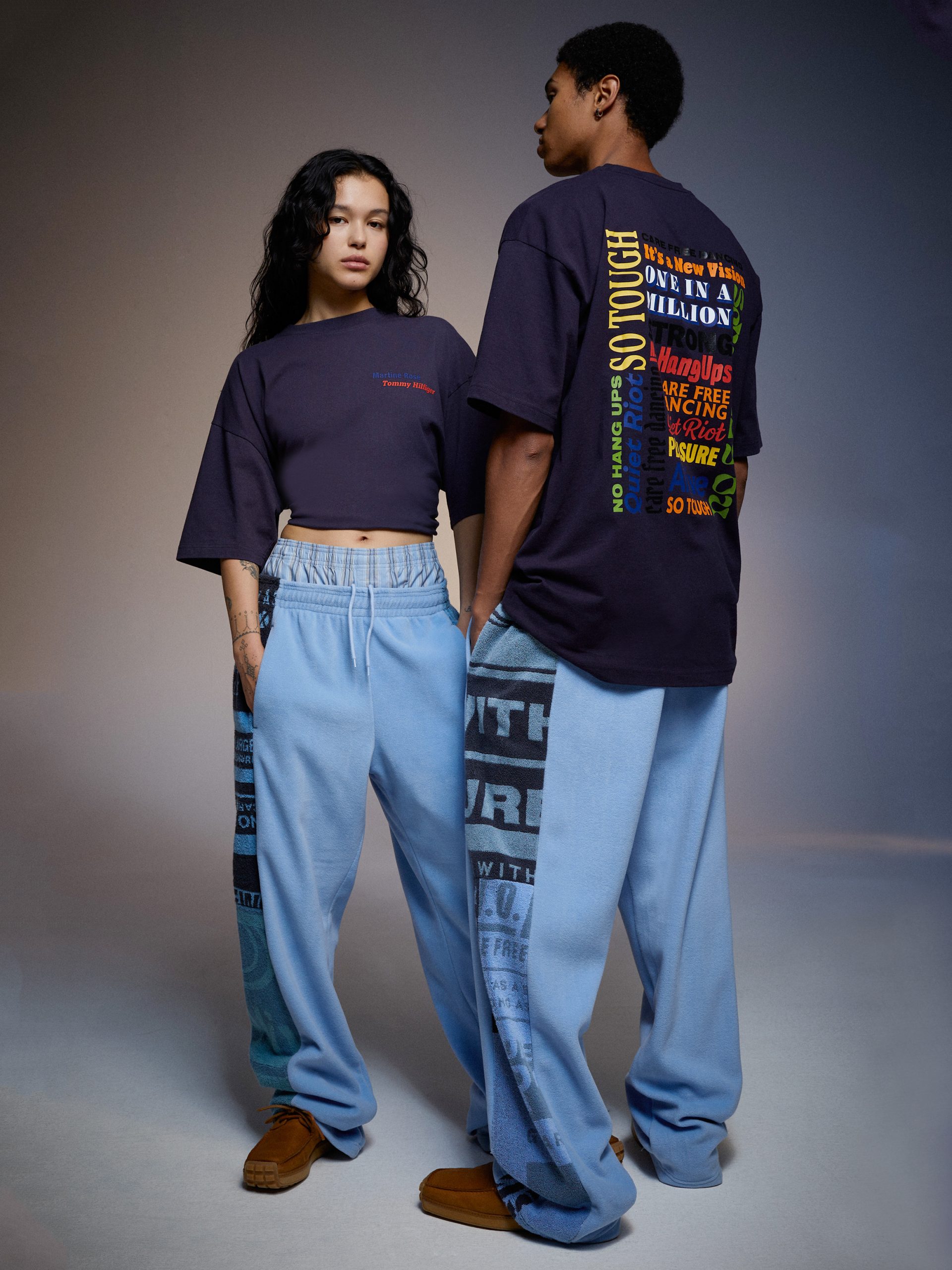 Commending Martine for her “out-of-the-box and experimental” approach to fashion, Hilfiger is not the only to speak highly of the British designer’s work. In fact, Business of Fashion reports that Rose is amongst the names being considered by Vuitton-owner LVMH to succeed the late Virgil Abloh.

We caught up with the designer to talk all things fashion.

How did the collaboration with Tommy Jeans come about?
Very organically, having been a source of inspiration for a long time, when the team reached out it felt like a natural marriage between Martine Rose and Tommy Jeans. 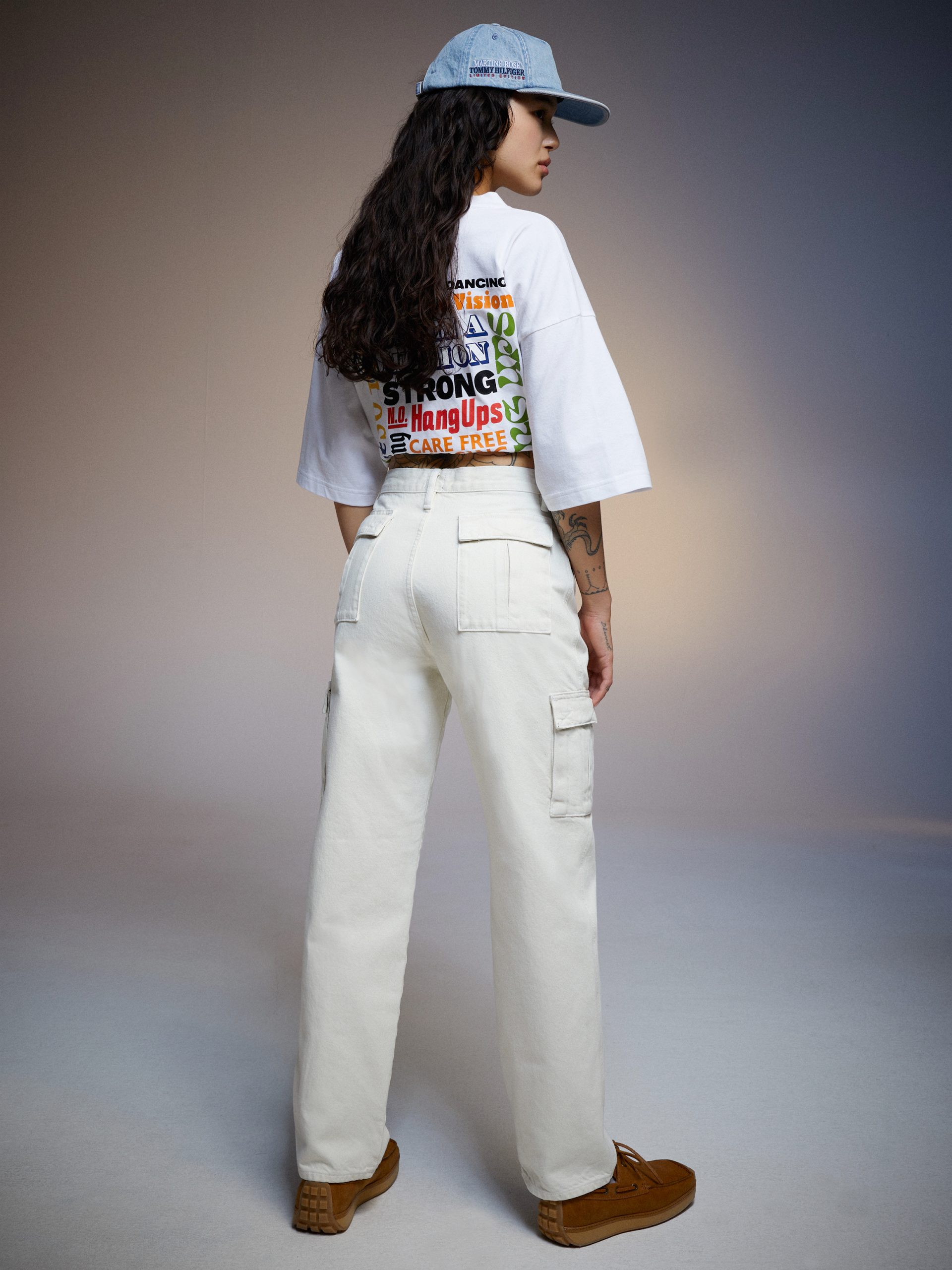 How was it working on this collaboration?
The handwriting of Tommy was so familiar, there was an existing synergy that made the collaboration a very easy process. It was amazing to get access to the entire Tommy archive. We’ve worked on past collaborations where the brand does something completely different to us, with Tommy it was a fluid process as it’s a brand we already draw inspiration from.

What inspirations guided your creative process for this collection?
We wanted to avoid the more obvious approach of 90s hip-hop revival, it felt too familiar. We wanted instead to have a conversation around the preppy, collegiate Hamptons, American man. An exploration of American culture. Something I always reference is the “cool London man” so it felt right to uncover this idea of an American man.

What brand values does Martine Rose share with Tommy Jeans?
We share an interest in exploring archival and historical storytelling. We took a familiar narrative; creating characters and building worlds around them, and then twisted them,  subverting these familiar characters into something new. 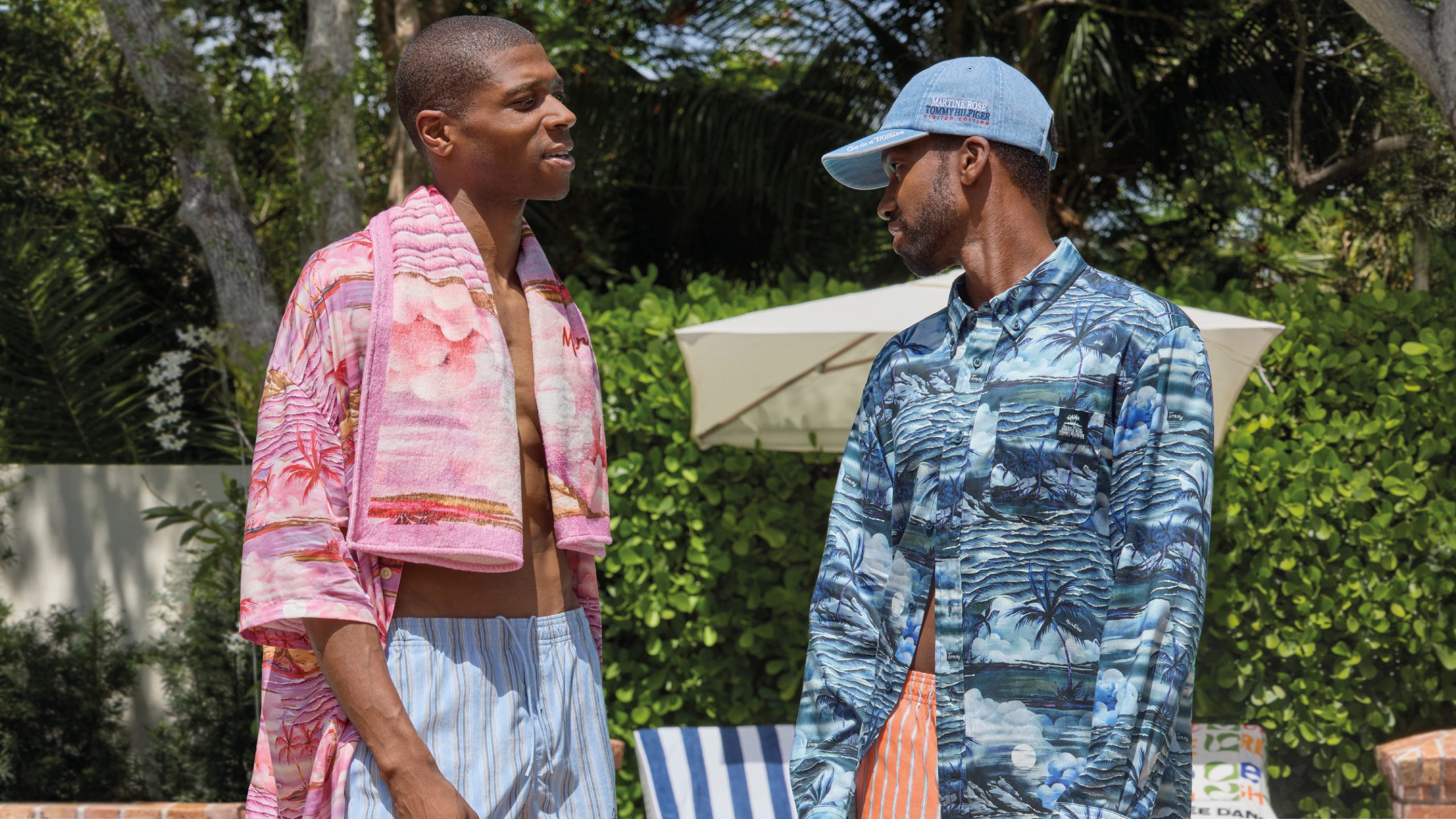 Where do the two-brand aesthetics meet?
Our brand aesthetics met through photographer, Buck Ellison. He was able to bring our collective narrative vision to life, playing with social codes and delving into the minutia of collegiate culture. Ellison’s work vividly captures the detailed mechanisms that quietly, even politely, obscure inequality in America and because of this, he was able to help us navigate and capture the immersive world of American culture, that we wouldn’t necessarily appreciate from the outside.

How did you clash your brand codes with Tommy’s DNA?
By exploring characters and subverting them, making something familiar seem new, unveiling nuance and creating humour within the subcultures

3 words to describe the collection
Fun, subversive and satirical

What is your favourite piece?
The towelling robe. It feels like a real marriage of the two brands.

What message do you want to communicate through this campaign?
We wanted to explore people outside the realm of straight white privilege – a subculture not usually explored through an American cultural lens. The campaign represents marginalised relationships; inter-racial gay couples are shown in an affluent preppy way.

How did you use the campaign/storytelling to amplify the inspiration behind the collection and the message you wanted to deliver?
We used the vocabulary of American privilege to amplify our narrative message. Buck Ellison produces meticulously detailed images that examine white American wealth, depicting Ivy League students, WASP dynasties, and affluent homes. For the campaign, we echoed Ellison’s staged still-life aesthetic but used a black and Asian gay couple as the main characters within the narrative. We used the familiar notion and language of white American privilege to create a new stronger message, representing marginalised communities and different facets within American culture. 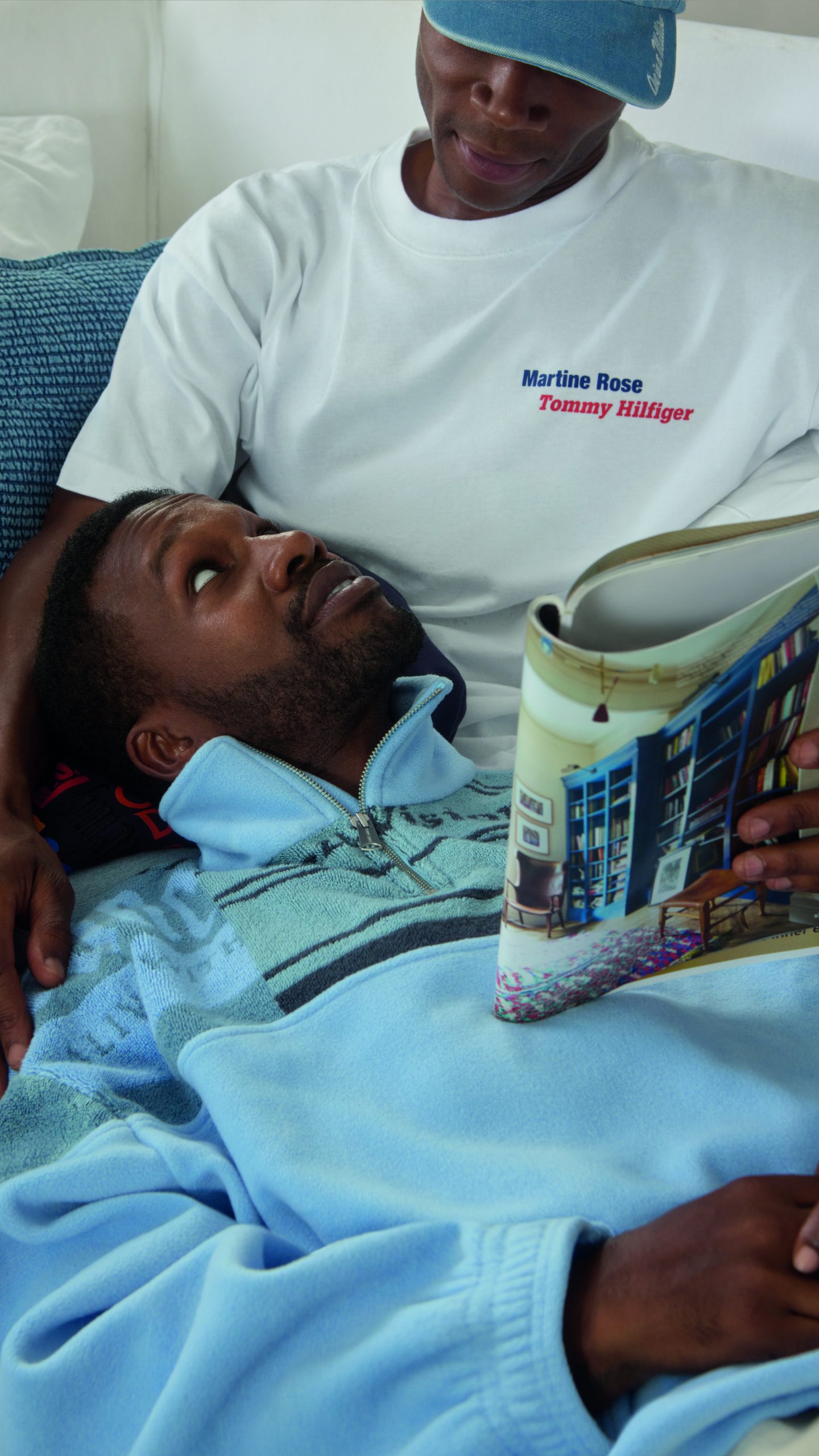 What importance do subcultures hold in your work?
We always have a discussion around communities that aren’t represented. It’s so important to shine a light on marginalised communities and give them the right representation within our campaigns.

What is your first memory of Tommy Hilfiger?
It’s all of the 90ss hip hop I grew up with!

What excites you about the future of fashion?
That there are more people included in the conversation giving a richer, diverse point of view.

The Rhinestone Edit: Simple ways to add some sparkle to your festive ‘fits

Why everyone’s talking about this acne skincare range