Here at Image.ie we’ve been getting involved in Fashion Revolution Week by shopping our own wardrobes and avoiding fast fashion. We asked our IMAGE family to pick an item in their wardrobe with a #lovestory and tell us why they’ll always choose it over disposable fashion. These are their stories:

My wedding dress was first worn by my aunt in 1955, and has since been worn by my mother, my cousin, my sister and then me in 2000 for my own wedding. After every bride, the dress is cleaned and preserved in a special box from the dry cleaners to make sure it survives. It now lives with my aunt in Washington DC. It was an honour to wear something that was so lovingly preserved and could potentially outlive its wearers! It felt beautiful, and it felt like me. Nothing else that I could have bought in a store would have given me that feeling. 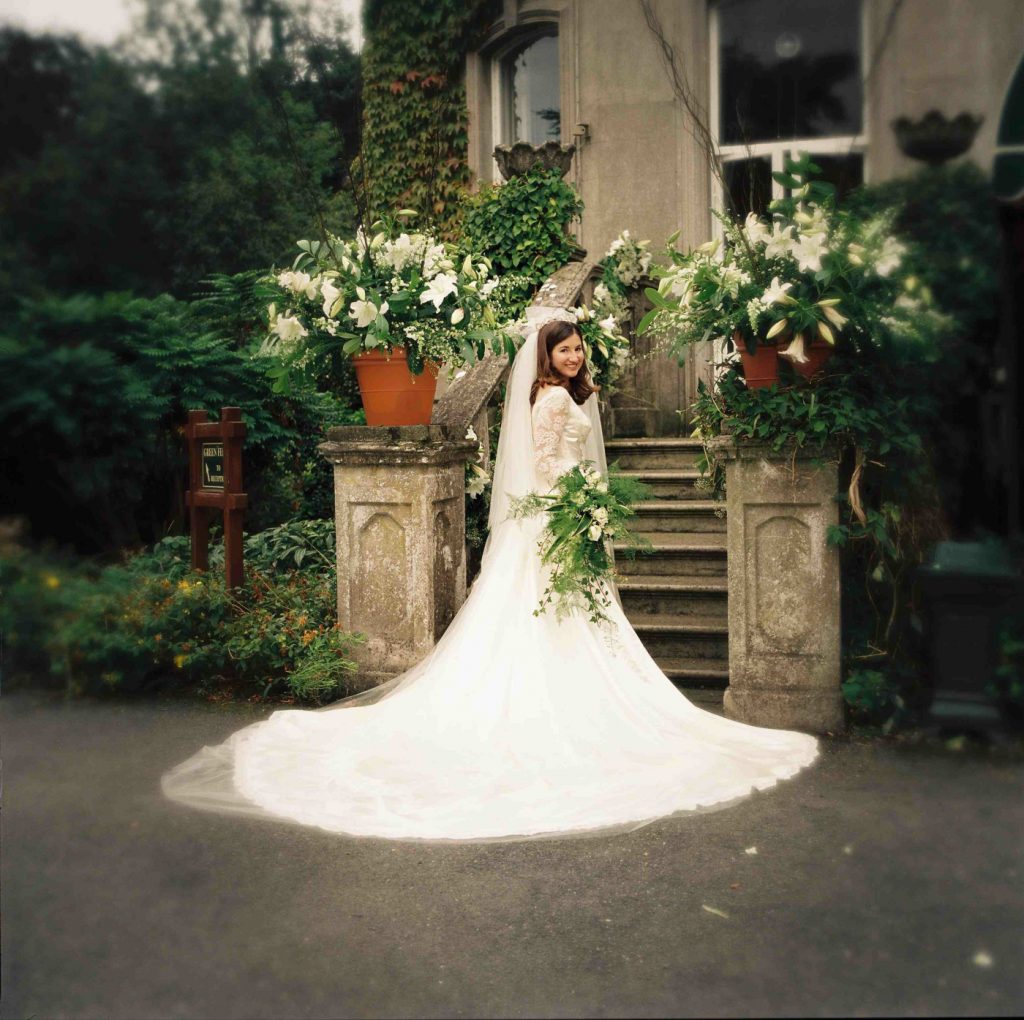 My mum bought her first ever big designer purchase when she was pregnant with me. She was living in Lyon at the time and apparently every woman there owned a Louis Vuitton bag. She said that it was a known thing that the more worn down and falling apart your Louis Vuitton was, the chicer you were; well, according to French women she knew. The cream leather straps turn brown and even green in parts over time, and having a Louis Vuitton bag that looked that way was the ideal scenario.

What’s funny is, the bag, which my mum kindly passed on to me, finally has that ‘vintage’ look. The style my mum was after initially. I adore it and even though it’s as old as me, I use it every day without fail. 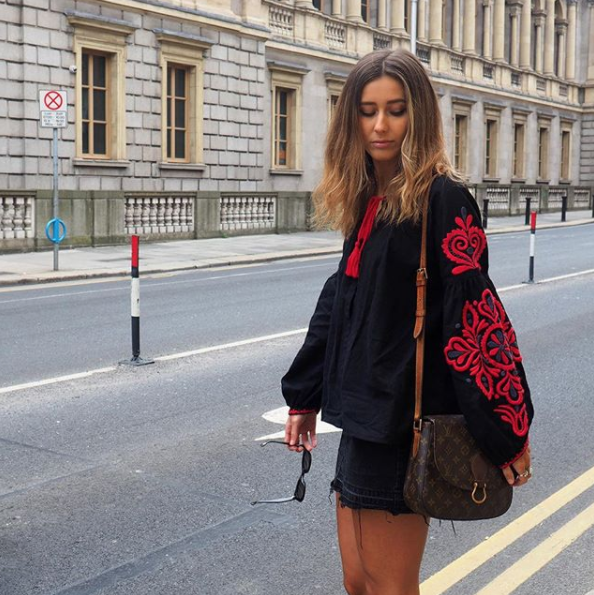 My all-time favourite item of clothing has to be my Power Rangers jumper that I found in a Melbourne flea market back in 2013. I got it for $5 and although I’m now convinced that it was once a young boy’s pyjama top, it’s the one piece of clothing that never fails to bring compliments my way. I never realised how much passion people have for The Power Rangers, until I wore this top around… People just strike up a conversation with me when I wear it, and one time I wore it on a night out and the barman loved it so much that he gave me free drinks all night!

My mum owns an old Versace dress that I’ve borrowed on one or two big occasions. It’s 40 years old and looks like it’s still fresh off the hanger, that’s good design for you.

It’s simple and black, floor-length with a cutout panel on the side. It makes me feel ten feet tall and a bit like Elizabeth Hurley. I wish I could wear it every day and hope to pass it on to my daughter one day. 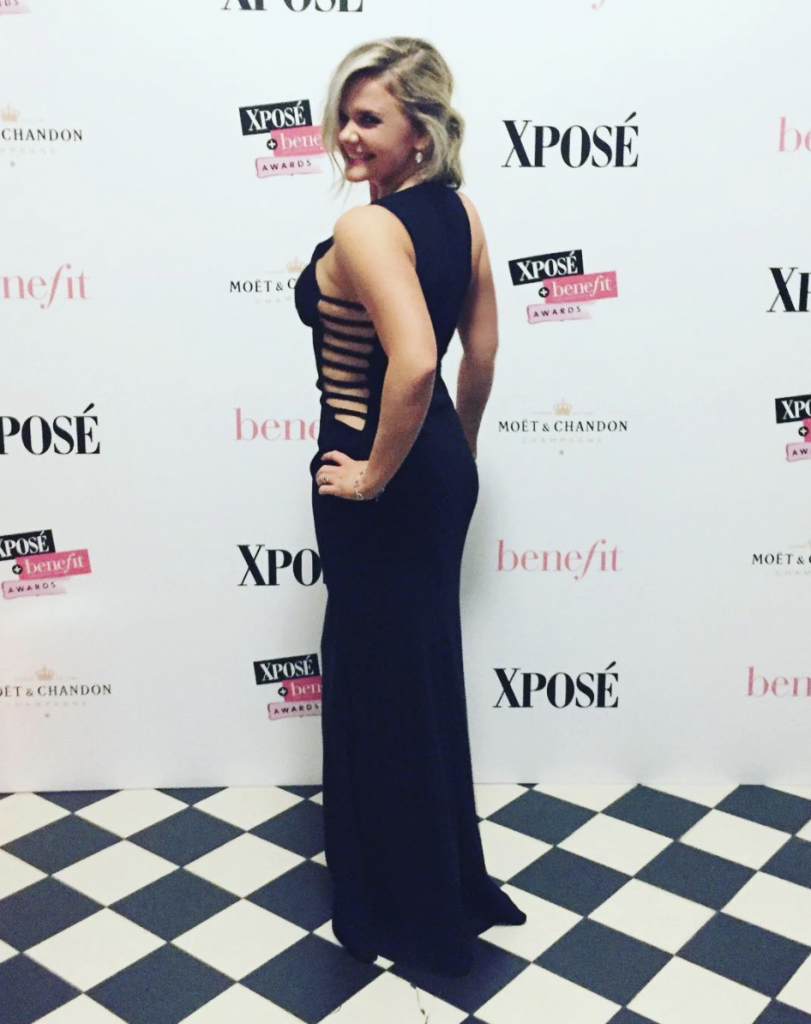 I have a flowy, calf-length skirt from H&M that I love. It’s cream with burnt-orange and burgundy butterflies all over (and it looks especially beautiful with black heels and a tucked-in top). I bought it ahead of my first interview for a journalism position – an internship with a beauty magazine. I got the job, and when it was time to move on from there, I wore it to another job interview. I got that job too, so I call it my lucky skirt. I’ll probably keep it forever.

My dress is vintage ’70s, I bought it seven years ago in a market in Amsterdam right after my husband had proposed to me. The dress cost €10 and initially, I bought it, with the idea of wearing it as a wedding dress. I actually bought about five potential wedding dresses in various thrift shops but in the end, I had one made. I love this even though, one time a friend of mine who has pretty conservative taste gave me the best ever backhanded compliment ever when she saw me in it at a party and said: “Well, this proves that you can wear anything!” I love the challenge of styling vintage and wear this dress with trainers, cowboy boots and sliders! It’s also great with leggings underneath in colder months. 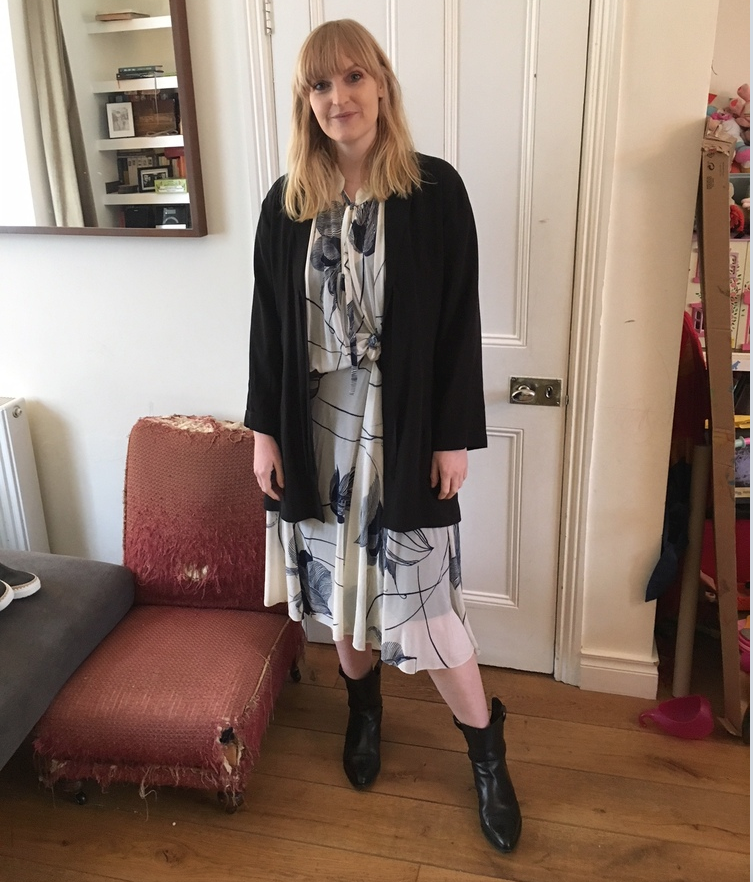 I got my first, real ‘adult hat’ made last June. I’ve always been a hat person (which you can read about here), so when I got an opportunity to create a one-of-a-kind hat for fashion week, I jumped at the chance. This particular hat is natural straw with a wider-than-normal brim. A pink, two-foot pheasant feather (the only of its kind in Europe) sits on the side and blows in the breeze when I walk. It’s more than just a ‘hat’ for me; it’s part of my wardrobe arsenal that gives me confidence and makes me walk with my head held high. (This also happened on my first day wearing it so I call it my lucky hat). 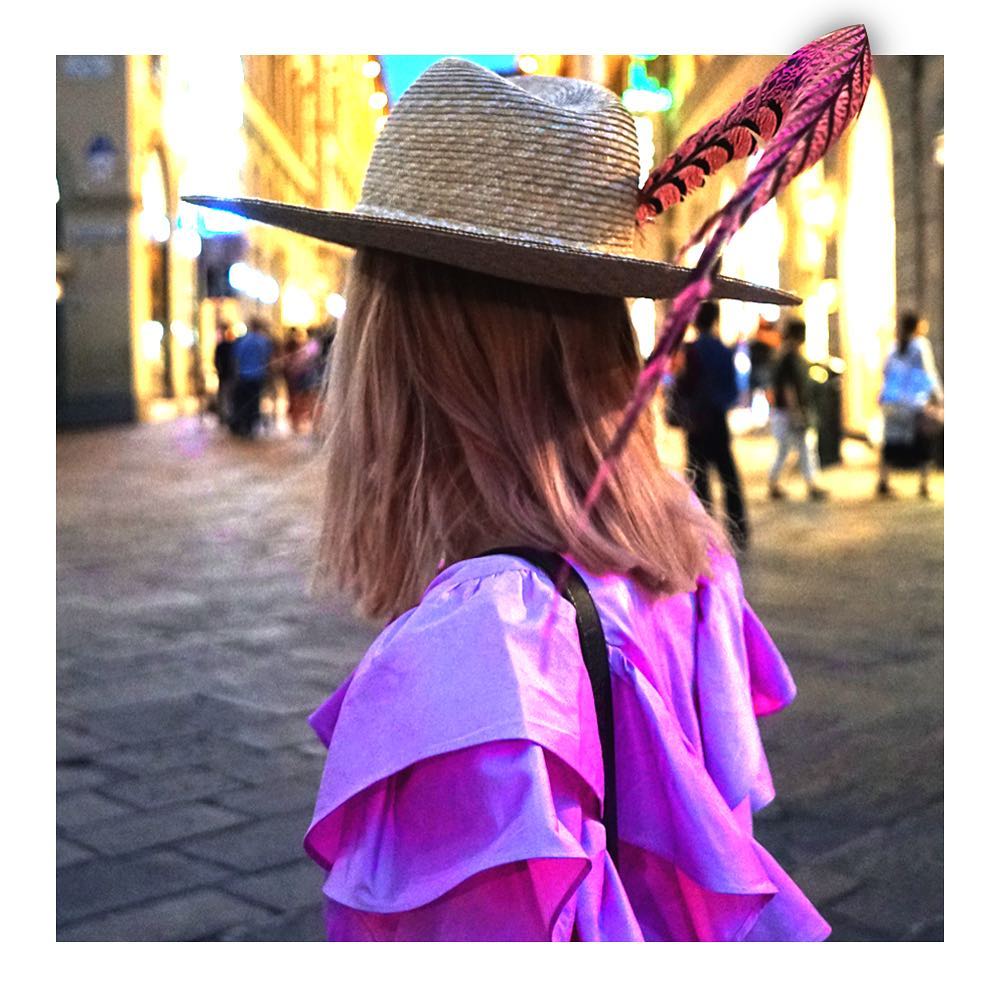 My mam has handmade me two Aran knits over the past couple of years; a cream jumper and a red cardigan. I love them both equally, and I know I could never buy anything as good in quality in the shops (not anything that I could afford, anyway!). I wear them to death every winter, they’re beautifully made and I always get so many compliments when I have one on. I then get delight in telling people that my own mammy made it just for me – made with love! She’s a keeper.

Picking out one single eternally-beloved item of clothing or accessory is probably as hard as choosing a favourite child, however, this 1920s style white dress fills me with utter joy – as my face clearly shows. I saw it in Folkster in 2015, pronounced it My Perfect Dress and went hence into the fitting room (and despite not having an occasion in mind to wear it to). Sadly for my bank account, it fit like a glove, so there was no choice but to take it home and for this Cinderella to wait for her ball…
Which came a few months later when I was invited to Le Diner en Blanc in Paris, an invite-only outdoor flashmob dinner party that sprouts up every year in some of the city’s most iconic locations. As its name suggests, the dress code is white so I had a pinch-me Midnight in Paris moment channelling Zelda Fitzgerald at a banquet of more than 10,000 dinner party guests stretching outwards from the Palais Royal. And I didn’t spill a single drop of vin on it. I wore the frock for a second time at one of Film Fatale’s Gatsby’s Mansion summer parties at IMMA and danced the night away in it again for my ‘Party Like it’s 1929’ 40th birthday shindig. That was two years ago, which means I really need another excuse to give it another airing. My next visit to SuperValu, perhaps? 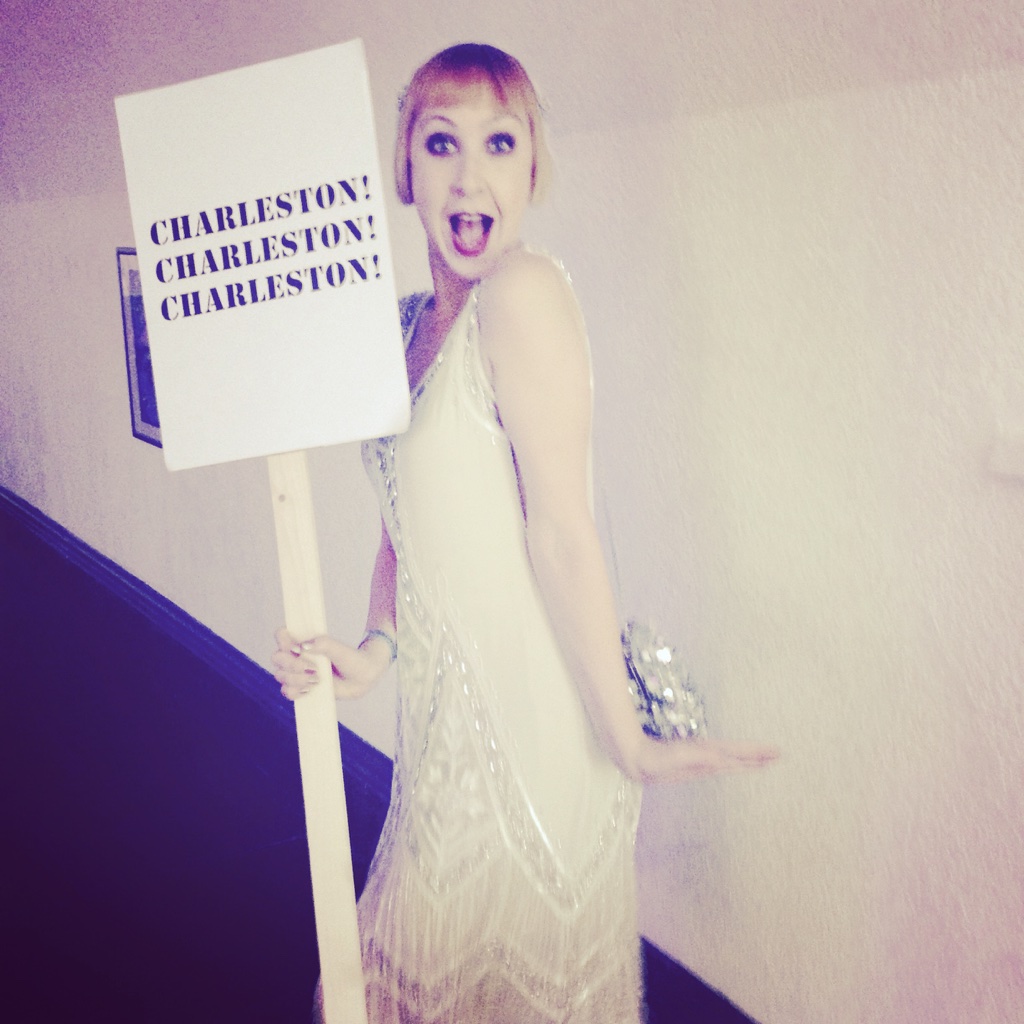