Gucci Took Us On Another Whimsical Journey This Week

This weeks Cruise Collection in Florence was an ode to old Florentine art and culture and was a rich and whimsical, yet modern, approach to the renaissance era.

When Alessandro Michele took over as Gucci creative director in 2015, nobody could have imagined the creative assault he was about to launch. He has – in impeccable time I might add – transformed the?heritage-rich brand into a millennial phenomenon that continues to grow in popularity?with young consumers and is responsible for a dazzling turnaround in profits that continue to skyrocket. Speaking to Vogue Magazine in 2016, Michele said himself that “creativity knows no bounds” and his willingness to continually challenge and push the boundaries of trends and style has proved that.

The ultra-exclusive Palazzo Pitti was this year’s’destination – despite being Michele’s second option after the Pantheon in Rome. Florence felt fitting though; considering it is the birthplace of Gucci in 1921, after all. But having your flock of models glissade through?Century-old rooms which hold some of the world’s most culturally-important and priceless works of art leaves little to give out about.??I am always connected with the Renaissance, so I feel very comfortable here,? Mr. Michele said to a New York Times journalist.

?I am always connected with the Renaissance, so I feel very comfortable here?

Magenta carpets lined the delicate walkways and staircases, and Mr Michele’s models represented fine 18 Century paintings; their porcelain skin mirroring those hanging on the walls around them. We’ve been conditioned by Michele, to a point, to expect extravagant, compelling, and obscure design. It has become his USP if you will. As consumers, we look forward to seeing the?extraordinary embellishments and appliques, the rich assortment of textures, the new Gucci “it” crew of models (many of which were new faces, FYI).

Similar to Chanel’s Cruise Collection in May, Gucci’s collection gave a nod to the Roman?empire (which is maybe why Michele wanted to host the collection in Rome), but nonetheless?contained the Gucci charm we have grown accustomed to including large appliques, oversized accessories, full-length?gowns, fine silk, and great tailoring. We saw golden wreaths, twinkling tiara’s, shimmering laurels, glittery framed sunglasses, spotted turbans, glistening veils, neat two-piece suits, embellished tights; all fashioned together into a whimsical story.

Michele’s eye for detail was apparent in his beauty looks too. Makeup was kept natural with a?pearlescent glow which was accompanied by a series of pearls and stars; giving a striking resemblance to?Botticelli’s ‘The Birth Of Venus’. 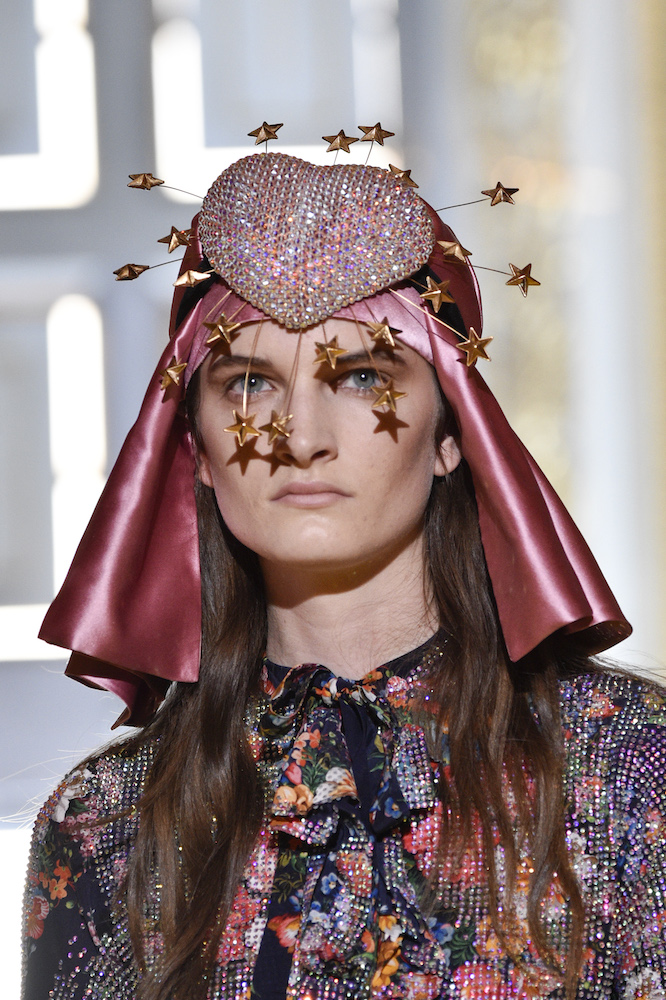 Birth Of Venus, anyone?

Fans of last years much-coveted logo t-shirt will be happy to see another rendition; this time emblazoned with glitter across tights, t-shirts, wolves heads, bags, and socks and slogans that read?Guccy, Guccification, and Guccify Yourself.

Some believe that Gucci’s recent collections to be too “samey”, and while they’re not totally wrong, you can’t deny the spectacular beauty of the garments, but the level of detail given to every single detail of the show. And that is why Gucci – under the protective eye of Michele – will continue to be a fashion powerhouse for many more collections to come.

Take five and browse through our favourite bits of Gucci’s Cruise Collection in our gallery above.

Going to Galway Races? These 5 modern looks will get you noticed