Andie MacDowell is having a deserved moment right now. Not only is she fabulous and empowering in Magic Mike XXL, as a sexually dissatisfied middle-aged woman the travelling troupe of male strippers hang out during the movie, but she’s also talking about her body image in a way that speaks to women around the world.

A few weeks ago at Cannes she confessed that she avoided one of the festivals in the 1980s due to her low self-esteem surrounding her post-baby body. The now 57-year-old actress was terrified of what the media would say about her if she showed up looking like herself in the aftermath of becoming a loving mother.

?Sex, Lies, and Videotape won here and I didn’t come because I had just had my daughter, and I was nursing her and really round and I was afraid people would make fun of me,? she said. ?I know that was stupid. Now in hindsight, because I’ve matured and I’m older, I don’t really care what people say.? 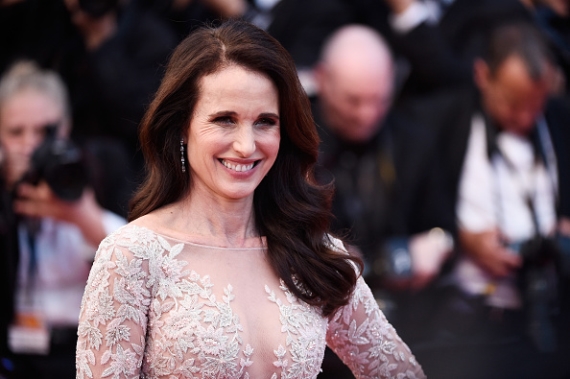 And now, fresh from calling out the media and its harmful effect on women trying just to do their job, Andie is breaking another taboo by appearing on the cover of a glossy magazine unretouched.?The actress covers GENLUX, a fashion and philanthropy publication based in Souther California, this month in a pink ballgown with the tagline ?No kidding, not a lick of photoshop! 57 and still sexy and fabulous as ever!? We all nod in fervent agreement. MacDowell herself says the reason she decided to ditch the help of photoshop was to promote the message ?Some kinds of lines are sexy. Some people say men get sexier with age, but so do women. The idea that men are allowed to get older but women are not is an old rule that’s being broken.?

Unretouched images are now becoming the easiest way for fashion campaigns to get positive attention these days. Swimsuits for All enjoyed incredible feedback last month when they debuted a video campaign with model Denise Bidot. There wasn’t a thigh gap in sight, cellulite was on show, and a bikini made for curves showcasing actual curves had us all audibly cheering.