The social media movements changing our definition of beauty

For a long time, there has been one template for how a woman should look, but now social media is giving a platform for users to change that narrative, says HOLLY O’NEILL.

We have come to inherently accept that the women we see in advertisements, movies, magazines and throughout cultural phenomena have been retouched or digitally altered. Now, social media is as influential a marketing tool and carries equal significance in our culture, and we don’t hold it to that same level of scrutiny. The burden of the pressure to fit into one template of a woman – thin, hairless from the eyebrows down, gravity-defying boobs – was once only carried by celebrities, until we became the documentarians of our own lives via social media and widespread adopted filters and Facetune. The playing field has evened and we are all expected to be selfie-ready, all the time. Mercifully, there are women using social media to redefine the standardised beauty ideals, if homogenised sculpted faces, Bambi eyes or baking have been bombarding your newsfeed for too long.Classic trolling isn’t going away, and anything outside of beauty’s careful parameters will likely be targeted. Take a deep dive into any of the following hashtags, and you’ll still find a steady stream of comments vilifying she who dares to ask to be accepted exactly as she is. But if growing hashtags and followers are anything to go by, there is a cultural shift celebrating merely existing without apology, led by women using social media to dismantle outdated and unrealistic beauty standards. Prepare to be inspired to start your own…

#UNIBROWMOVEMENT
Model Sophia Hadjipanteli has a unibrow that got her on the runway at Roland Mouret for SS19. She dyes it black and sometimes adds blue mascara to it to make it even more marvellous. She quit plucking her eyebrows when she realised she really liked how her monobrow looked. Hardly radical, I know, but a quick look at her Instagram will show you there are many vocal trolls who do seem to find a patch of hair the width of a centimetre on a woman’s face quite radical. Her social media campaign #UnibrowMovement is changing that conversation, inspiring women to think of the unibrow as less an affliction of the unfortunately hirsute, and will make you throw away your tweezers. 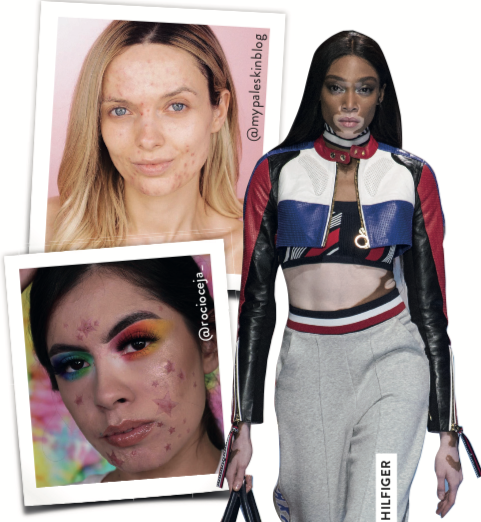 #SKINPOSITIVITY
Acne, rosacea, psoriasis, eczema and scars affect psychologically as well as physically. They are a struggle you wear on your face every day, and many studies show the relationship between skin disorders and depression. If you’re working your way through treatments or have tried them all with little difference, a constant bombardment of a narrative with no alternative through social media can be too much to bear.#SkinPositivity is the antidote of Instagram’s perfectionism, a space to bare all, make-up-and-filter-free, started by beauty blogger Em Ford, above right, following her YouTube video entitled “You Look Disgusting” where she discussed the comments she receives about her acne. The movement is redefining expectations about skin, with some heavy hitters in on the cause, including Saoirse Ronan, who let her own acne scars shine through in Lady Bird in order to put the big screen spotlight on different skin types. Model Winnie Harlow, who has vitiligo, has also spoken out on the skin condition and is considered a trailblazer in the #SkinPositivity community, where vitiligo has spawned its own campaigns, including #vitiligopride and #itscalledvitiligo. 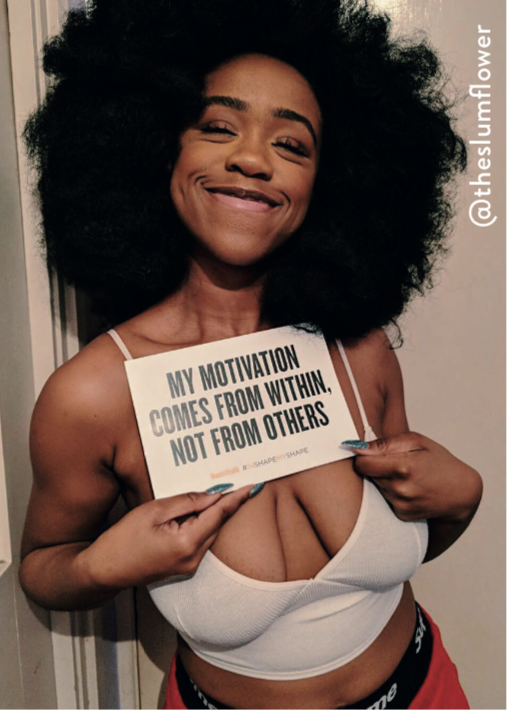 #SAGGYBOOBSMATTER
Chidera Eggerue, author of What a Time to be Alone, took her braless blog mainstream and her hashtag #saggyboobsmatter viral when she questioned a societal fixation with perfectly symmetrical boobs. Breasts haven’t had a place in the conversation in the numerous destigmatising body positive campaigns, but visit Chidera’s social media revolution and you’ll see the extent of the positivity she’s caused around the world. According to Chidera, women frequently reach out to her to let her know that she inspired them to cancel their breast augmentation surgeries. Burn your push-up bras. 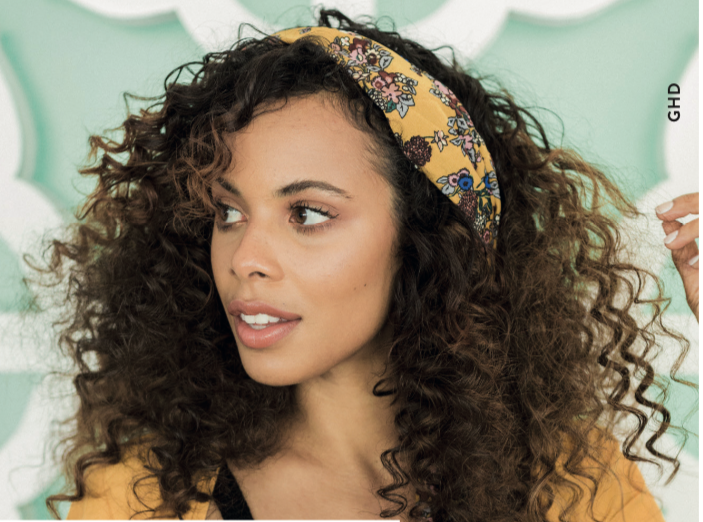 #CURLSLIKEUS
Singer Rochelle Humes, above, spent her whole life straightening her hair until, at the end of last year, her own daughter professed a sadness at not having straight hair like princesses. Rochelle ditched the straighteners and started the hashtag #CurlsLikeUs, showcasing her own natural hair’s journey through her Instagram. The hashtag is now on 18k tags. “Initially, I just wanted to get tips myself from other people and share things I found helpful using #CurlsLikeUs and then it just became a lot bigger than I thought,” she says. #CurlsLikeUs is now a website with tutorials, interviews with naturally curly haired influencers and routines for making the most of your curls, not to mention a curly collective of women finally embracing their hair’s natural texture. 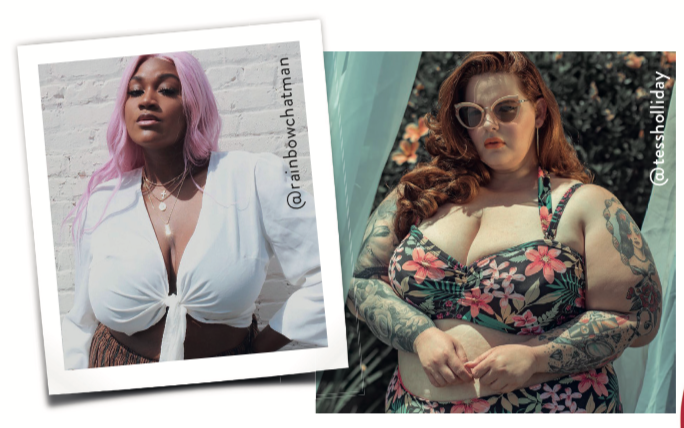 #EFFYOURBEAUTYSTANDARDS
When author and model Tess Holliday, above centre, found an online forum discussing how she was too fat for the clothes she wore, she posted modelling shots
of herself in bikinis and crop tops on Instagram with the message “I want you to join me in wearing daring fashions and stop hiding your body because society tells you to. Break out those horizontal stripes and hashtag #effyourbeautystandards.” That message now spans across 3 million Instagram posts and counting, including support from model Ashley Graham, right, who shared a series of unretouched photographs of her in a swimsuit in response. ThThe big, fat lies of feigned concern about the “promotion of obesity” have no place here. 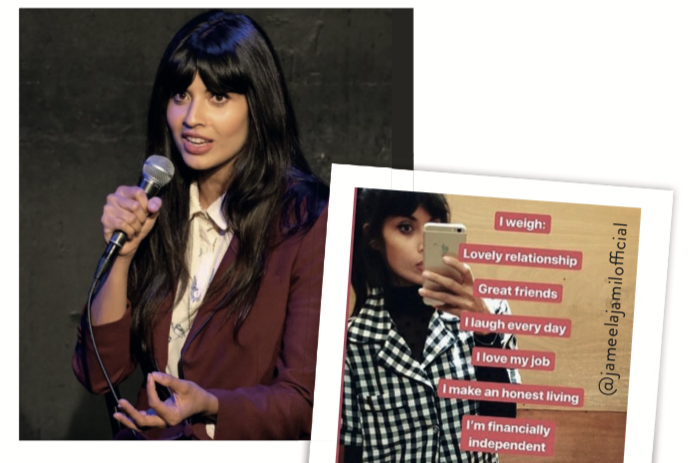 #IWEIGH
When actress Jameela Jamil came across an Instagram picture that stated the weight of each of the Kardashians and Jenners, she set up the @i_weigh Instagram account to help women see their value in more than kilograms. She calls out patriarchal advertising like appetite suppressing lollipops and wants to encourage women to see their worth as more than the sum of a number on the scales. The account has 181k followers and rising, and men are becoming increasingly more involved in the campaign, adding a worthy voice to highlighting the body expectations they also share. 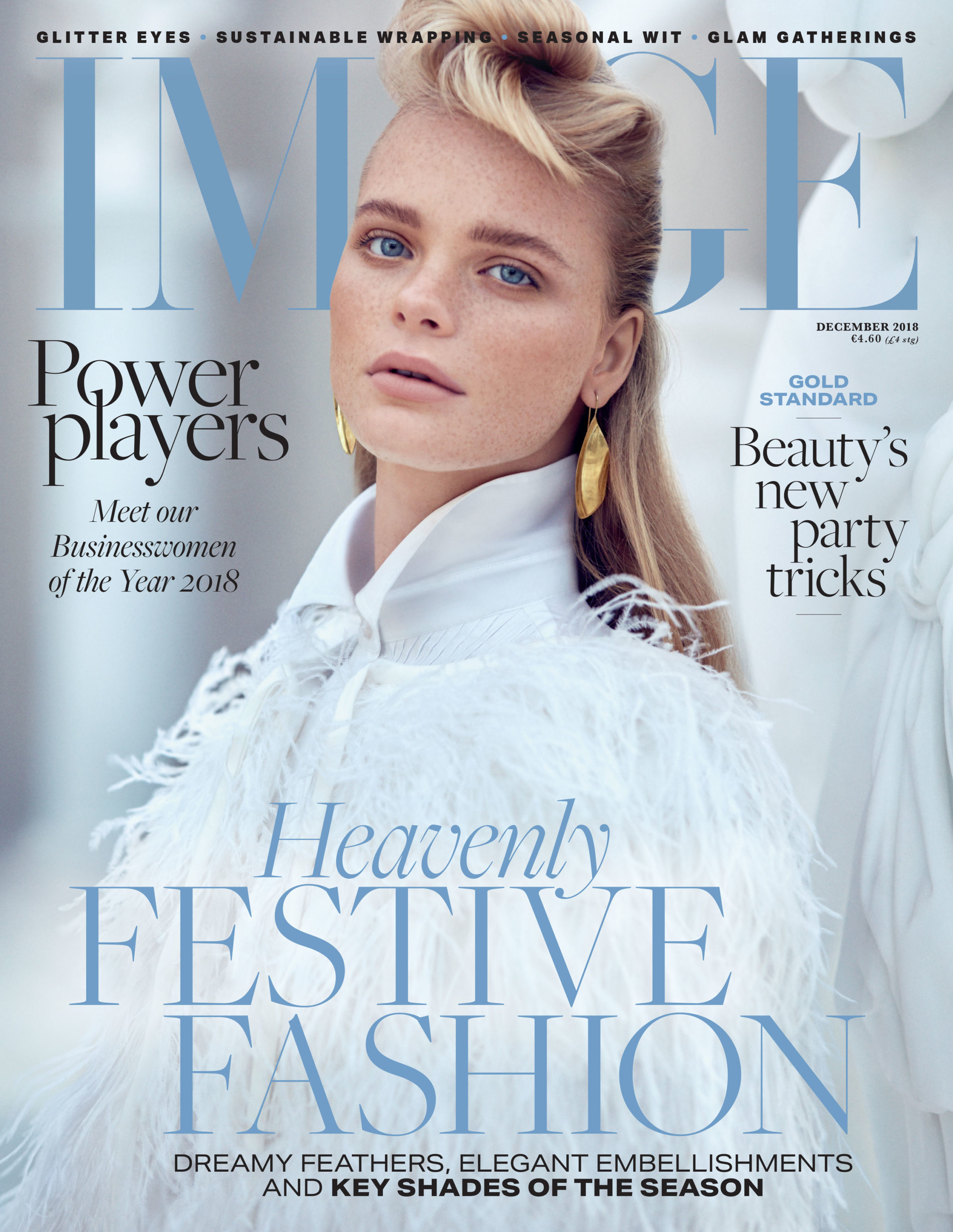