Work Wise: Escaping the Cult Of Busyness In The Age Of Constant Updates

Our lives are now punctuated by a relentless cacophony of pinging notifications and streams of constantly updating content, Sophie White is searching for the off-switch

Nearly everyone I know is trying to unshackle themselves from their devices. Where once, the smooth, liquid-like screens were a pool of possibility to dive into, heralding a new dawn of convenience, now the tech curse is an everyday struggle. One friend keeps all the phones charging on the hall table from 6pm on, meaning if anyone wants to check on something they have to go out to the hall and stand there by the door.

“Is it working?” I implore, jazzed at the hint that here at last might be a solution.

“No! Now, we’re all just in a back and forth to the bloody hall all night. It’s like a relay race,” she looks defeated.

Another friend has purchased an old-style alarm clock and is doing the ‘no phone in the bedroom’ rule to quell the scrolling and Whatsapp wakeup calls. She says this strategy has restored a sense of peace at bedtime and her love of books has returned now that bedtime isn’t monopolised by the phone. I am so attached to my phone that I couldn’t countenance this strategy, I use apps at night to help me sleep. In fact, if I’m honest I depend on apps to help me sleep. I think this quite effectively illustrates the hold our devices have over us – we believe that we are controlling them but, in fact they’re controlling us.

When we are bored the endless scrolling can almost feel like a sedative, when we are anxious tapping the screen to reveal who has recently ‘liked’ our status gives us a little serotonin delivery and when we are busy they can make us feel productive even if all we are doing is flicking between different messaging platforms never quite finishing a single conversation while, in front of us, there are 18 tabs open on the browser of our laptop. It gives the all-important appearance of productivity and busyness without a single concrete thing being achieved. And the most unfortunate thing is that ‘busyness’ holds tangible currency in the current working model of freelancers and side-hustlers.

As a freelance type I go to events with other freelance types and lately I’d begun to notice that the fallback, small talk I engaged in was mainly centred around each person desperately trying to be the busiest and most stressed out in the group.

“I am flat out,” says Siobhan.

“Ugh, same. I am basically going to have a nervous breakdown, I have so much on at the moment,” raises Fiona.

“I am literally going to die, I have so many deadlines right now, DIE!” despairs Marie before crumpling to the floor and dying.

“You win, Marie,” we toast her poor stressed corpse with our slightly warm Prosecco and continue lamenting our “insane schedules’.

Cognitive behavioral therapy draws a very distinct link between the language we use to describe our thoughts and situations and the emotions we experience.

As the famous Greek stoic Epictetus says ‘it is not an event that causes a man’s upsetness, it is his judgement of the event.’

I would frequently notice that when I’m involved in one of these ‘who’s more busy and in-demand’ playoffs, I would genuinely feel even more anxious and overwrought by work, even if the load was reasonably manageable that week.

University of Alabama researcher, Will Hart conducted four experiments to explore the effect wording has on the way we respond emotionally to different events. For the study, participants recalled happy, sad and neutral events. He found that people who described a positive event with words that suggested it was ongoing felt more positive. And when they described a negative event in the same way, they felt more negative. This could be a valuable lesson for how we frame our work and perhaps a way to escape the ‘busy syndrome’.

But why do we engage in this busy narrative in the first place? I think it has a lot to do with the way we now, to a certain degree, shape a narrative of our entire lives online with social media channels. A year ago I was a freelancer and I was not on social media, and I was quite simply unaware of how ‘busy’ my peers were. I joined Instagram at the behest of my publishers and was immediately bombarded with the myriad achievements of everyone around me.

“So this is what people do on social media,” I mused to my friend. “Shout about all the amazing things they’re doing and how busy they are.”

I do love it to a certain extent. Instagram is like one giant town square packed with everyone you’re vaguely connected to preening and pouting and shouting about their lives – suffice it to say, the people-watching is mighty. However, I don’t enjoy the constant reflexive comparisons I find myself making almost involuntarily. Comparison syndrome is all too prevalent among my generation and it takes a lot of rational self-talk to wean off it. I’m better at this on some days and not so good on others.

Busy has always equated to success. Busy people are to be revered and emulated ­– how many times have you seen features dedicated to the secrets of busy people, or their work routines? Even the idiom ‘If you want something done, ask a busy person’ suggests the superiority of these super beings. However, the tide is turning on busyness, where once workers were enamored of the convenience of picking up emails wherever, whenever, as the pinging notifications have begun to blur the boundary between work and play, the disadvantages to being yoked to work every hour of the week began to emerge. Resentment towards these tyrannical tamogotches festered and in some cases people have begun to suffer actual physical burnout.

Writer, food stylist and events creative, Aoife McElwain is one of the busiest people I’ve ever come across. I always envied her abilty to spin so many plates while always managing to look like she was having the best time doing it, so I was amazed when she told me she had begun working on her just-released book Slow At Work after a period of burnout.

“I was really anxious and depressed. I had just gone freelance and I felt like a failure at everything I was doing,” she says over coffee.

“The biggest change in the last 10 years is that we don’t give ourselves much time to do nothing because of our smart phones. We have this amazing technology in our pockets but it controls us rather than the other way around or we feel like it’s controlling us. So when we’re sitting on a train, we’re looking at our phones instead of out the window thinking about a problem or whatever that might be. So I think we have to have awareness around this.”

McElwain’s book reads like a manifesto for the new era, a manual for finding balance between work and productivity and the equally important play and rest. And to drop the endless ‘busy talk’, as Shakespeare says: ‘Nothing is good or bad. Thinking makes it so.’

Photo by Vanessa Serpas on Unsplash

Buy Slow At Work: How To Work Less, Achieve More And Regain Your Balance In An Always-On World 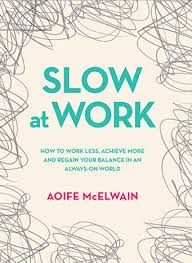