Web Summit: ‘Where else would you see Eva Longoria,  Elon Musk and Enda Kenny on the same stage?’

Eva Longoria at the Web Summit in Dublin

Since its almost humble beginnings in Dublin with 400 people, Paddy Cosgrove’s Web Summit has grown to attract over 700,000 listeners

On Monday, November 4, to Thursday, November 7, the 9th Web Summit will be held in Lisbon. The technology conference – with the official tagline “Where the tech world meets” – in fact offers a unique chance for people with across many sectors from around the world to come together to network, learn and inspire each other.

It describes itself as “the best technology conference on the planet” bringing Fortune 500 companies, ground-breaking startups and world-class speakers together.

“I don’t know of another gathering quite like it,” says Lobna Abulhassan, the Dublin-based woman who is the event lead on the speaker’s team, basically guiding speakers and producers for Web Summit’s North American conference, Collision.

“It’s a gathering of such diversity and depth…the different demographics could be very influential or very promising in their field. They’re all there to meet, exchange ideas, become friends, do business, have a good time, learn and network.”

The conference has grown into three elaborate events, including Web Summit as well as Collision in Toronto and RISE in Hong Kong.

The conference was founded in 2009 by Paddy Cosgrave in Dublin and originally attracted 400 attendees. By 2015, those numbers had risen to 42,000. “I [first] attended in 2013, and I remember just being like, ‘what is going on in this place?,’ recalls Aoileann Ni Chuilleanian , vice president of business development in exhibitors.

“It was incredible. I still remember the energy and the vibe.”

Today, the conference has grown into three elaborate events, including Web Summit as well as Collision in Toronto and RISE in Hong Kong. Web Summit now hosts over 70,000 listeners from across 160 countries.

“I think this is my fifth Web Summit … every year you’ll go and something will blow your mind.”

The diversity found in the content is the attraction. “There’s something new every year,” says Anna O’Hare, vice president of marketing. “I think this is my fifth Web Summit, so you’d think you’re kinda used to it by then, but every year you’ll go and something will blow your mind.” 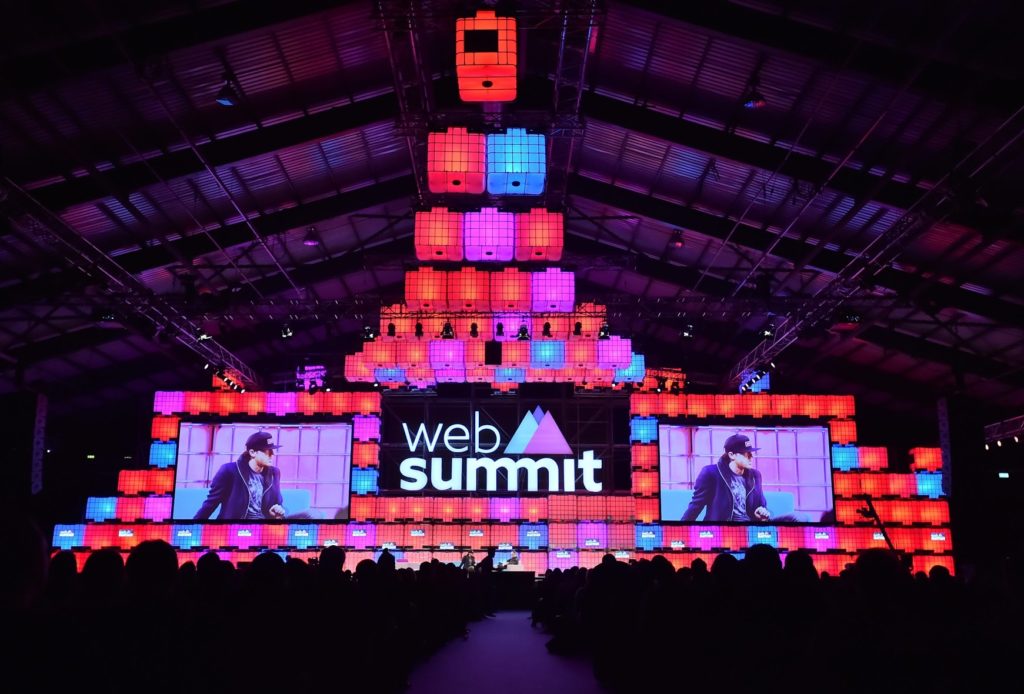 Web Summit’s three stages hold hundreds of discussions, all of which bring unique angles to a variety of relevant topics. You can find anything from more artistic topics and robotics to politics and human rights. Discussions are led by a variety of speakers, including CEOs, subject-matter experts, celebrities, politicians and athletes. Leave one panel about the future of transportation and go to another about the music app Shazam.

“My very first Web Summit was 2013 and I was completely blown over by the size and scale,” says Carolyn, head of community at the summit. “Where else would you wind up seeing Enda Kenny and Eva Longoria and Elon Musk on stage together?”

It’s easy to see why the Dublin-native conference expanded so abruptly, and it all goes back to the team behind the name. Web Summit’s priority of encouraging diversity of conversation is reflected in the team.

The Web Summit headquarters in Dublin is the base for all the women quoted in this article, alongside experts in design, technology, coordinating, networking, engineering, communication and marketing.

Out of 237 employees, roughly half are women. There’s about a year’s worth of planning a massive event like Web Summit, and a lot of women are involved in managing things that aren’t even thought about when you’re sitting in the seats facing the stage.

That’s why we decided to visit them in Dublin before the big event and profile them. Read that article here.

Stay updated throughout the week on the Web Summit website or stay in touch with over 22,000 women linked through their Women in Technology Facebook group.