Life-changing stories: ‘Guide dog Nina is my guardian angel. She shows me the way’

What to bake this weekend: Raspberry and lemon swirl rolls

‘When I menopaused I got no support, no guidance. Every bit of help I got,...

Just say?the words “Hollywood” and “sexism” in the same sentence, and you can practically hear – never mind see – the eye rolling. Despite Wonder Woman smashing records and glass ceilings last weekend, the standard why-is-this-even-a-big-deal comments didn’t go unmissed on social media. A strong, empowered woman holding a film together not solely?judged on her body type will always be a big deal because we just don’t see it on screen. And we should see it. Not even it – them. Complex, layered, real, imperfect women. Instead, we see stereotyping, women put in sub-standard roles (usually based on looks) like The Wife, The Girlfriend, The Arm Candy. In fact, films we see outside of the male gaze are so few and far between that when a female-focused?one takes off, it makes headline news around the world.

Taking part in a roundtable discussion for The Hollywood Reporter, actors Nicole Kidman, Reese Witherspoon, Elizabeth Moss, Oprah Winfrey, Jessica Lange and Chrissy Metz, all agreed that it was time for a dramatic change and that TV was a medium through which this change might finally become a part of our regular reality.

“I don’t think we’ve ever seen this much misogyny.”

It’s true; the small screen does have more opportunities for complicated female characters, just look at?The Handmaid’s Tale, Big Little Lies, and This is Us.

ICYMI: Big Little Lies Has Turned The On-screen Portrayal Of Women On Its Head?

?We have the opportunity to show the entire spectrum of human emotion that women have,? said Witherspoon. ?We aren’t just the wives and the girlfriends. We are actually living, breathing people who have insecurities.?And people want to see all ages, ethnicities and cultures represented.” 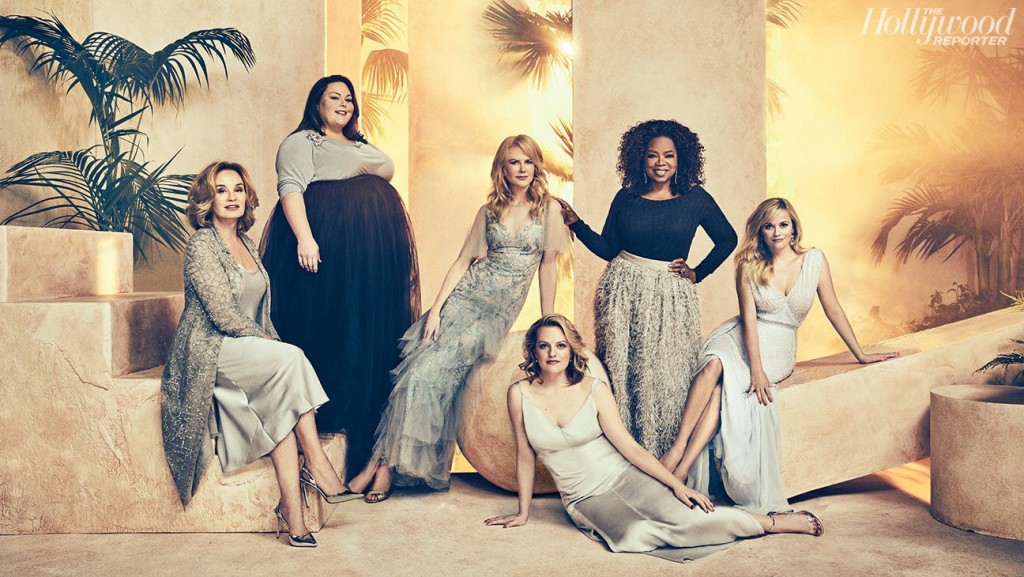 Metz, 36, who plays Kate on This is Us, acknowledged that filming nude scenes were difficult but that they were essential if women were to be better represented and relatable to those off-screen.

?Everything is about the way we look – initially, anyway – so I think it is super important that the fear is being removed,? she explained. ?I just got to the point where I was like, ?This is so important for this character and for the journey that she is going on and for me and for all the women who are in [the show’s] hair and makeup [departments] who were like, ?Oh, I could never do that!?

Metz added that her weight affected the roles she was offered, and Witherspoon and Kidman said that gender roles?also meant the parts they could accept were limited in comparison to their male co-stars.

We don’t get the choices as much with our careers and our lives because a lot of it is, we have to be there to take care of everything still,” Kidman said.

“I was talking to this very famous actor, and I said, “How did you prepare for this role?” He said, “Well, I went into the woods for three weeks, and I didn’t talk to anybody.” And this person has a lot of kids and is married. And he’s like, “You did the same thing for Wild, right?” I was like, “Uh, no.” If I went away for three weeks and no one could call me, everybody would’ve had a mental breakdown. So… they go away and come back, and they’re a hero. We go away and come back, and we have abandoned our children,” added Witherspoon.

The comments come just after actress Jessica Chastain publically said she was “disturbed” at the representation of women on screen during the Cannes Film Festival.

But as Wonder Woman‘s success proves, we know glass ceilings are starting to crack. We can only hope it’s a matter of time until they start smashing, one by one.