The youngest of 11 children, Derry-born author Geraldine Quigley reflects on her awkward relationship with her mother, which was tied up in tension and Catholic guilt.

She would say, “That’s ok for some people, but not for us. Nobody else needs to know about stuff like this.” I want to tell her that it’s going to be ok; no one is perfect – you weren’t, Mammy, and neither was I. So, I will tell this story, hers and mine, the way it was.

You see, Mammy and I were not close. From my perspective, she rarely intervened in my life, hadn’t since I was small. As the youngest of 11 children, I was way down her list of priorities and kind of got lost in the crowd.

There was a brief spell – I was 14 – when she noticed that, while everyone else in the family had a social life, I was short of friends and left out of many things, and she tried to get me to go out, even asking me if I would like to see a film with her.

This led to one memorable evening where Mammy sat through an awful film, from the Saturday Night Fever genre, trying to enjoy it for my sake, while I tried to make myself comfortable in her company, for both our sakes. The experience wasn’t repeated, but I did appreciate the gesture.

By the time I was 17, I was moving too fast for her. I had made my own friends and had a life, and I knew best about everything. Daddy was dead, and she was just there, in the house. I had met John, my future husband. We just had a great time together; we were in love. After a year of going steady, which included a three-month separation when he went to England, followed by an emotional reunion that Christmas of 1981, we were engaged, in the April after my 18th birthday. It was a natural progression of how we felt. And, when we showed Mammy the ring, she said, “Very nice”, but not much else. I don’t think she approved.

There is a span of time and of experience, between childhood and adulthood, where we float between one and the other until, gradually, we are grown and have moved past the influence of our parents. This is a gradual process for us, but it can be a huge and sudden shock for our parents, and I think it was like this for Mammy.

Of course, John and I didn’t have much sense, but then we didn’t feel as if we needed that much. It would be easy for me to look back and say how silly we were, how young and foolish, but we weren’t – we were very serious about each other, and our commitment to each other was deep and very natural. If other people could not see that, then it was their problem, not ours.

One evening, I was doing my homework by the fire in the living room. Mammy sat down and said, “I want to talk to you, when you’re finished.”

Uh oh, I thought, what’s this?

Mammy didn’t do heart to heart talks; if she wanted to talk to me, then it couldn’t be good. I made that homework last for as long as I could. The night lengthened, the fire died, and she still sat, waiting. Eventually, I had to stop and look at her.

“Why are you on the Pill?” she asked, and a stone hit the bottom of my stomach. Obviously, I hadn’t discussed the whys and wherefores of contraception with her. After a pause, I decided to be upfront.

“Because I don’t want to get pregnant.” What was the point in not stating the obvious? But she looked genuinely shocked.

“Do you mean that you are having sexual intercourse with that fella?”

The weight of a Catholic upbringing was brought to bear and, even though I believed I was immune, it ran deep, and I began to lose my nerve.

“But you’re not married.”

“How does that matter?” I demanded, but now tears were starting as the old standards reared their ugly heads.

“You’re going to stop taking this, and that’s it,” she said, and I heard myself agree, with a sinking heart. In that shifting sand of growing up I had just regressed ten years. I was cornered, shamed and disarmed. Overcome by the desire to be acceptable in her eyes, I felt I had no choice but to stop taking the Pill.

I did not, however, stop anything else.

A few months later, myself and John left Derry, for England. I packed my bags and sat in the house waiting for a lift to the bus station. Mammy came into the living room.

“Is this you out of the house, then?” she asked. She was leaving to go to her job as a school cleaner.

“Just remember, Geraldine, respect yourself or nobody will respect you,” she said, before leaving the house. It wasn’t much of a goodbye, and I didn’t think I’d be missed.

After two weeks in London, a trip to the Family Planning clinic revealed a six weeks pregnancy.

I never blamed her for what happened; Mammy had her own principles and came from a different generation. How much information had she been given when she was my age? None, I suspect. She took me back in, without question, with no criticism of my condition. Everything was different, now there was a baby on the way; it was inevitable and therefore it was welcomed.

The birth marked a new beginning, because I was a mother now. Our son came into her home and her arms like he was her own, and I was supported, helped through the long, sleepless, fearful nights to come.

Two years later, when we finally married, Mammy came up to me outside the Chapel. She put her hand out, shook my hand and smiled, saying simply, “Congratulations.”

There was no hug – things hadn’t changed that much – but at least an acknowledgement of her daughter and a gesture that revealed genuine pleasure, I think, in her happiness.

And, in the end, the long-awaited embrace came from me.

In 1997, I had a bad bout of depression and was at a very low ebb. One Saturday afternoon, Mammy called me into her living room.

“Here you go,” she said, and she put a small parcel into my hand, a white envelope folded over and taped down, with my name, Geraldine, written in her handwriting on the top. Inside was a set of white prayer beads.

Maybe it was the emotional state I was in, or the fact that Mammy had taken such care to wrap them, rather than put them in my hand – had even taken the time to write my name, like it was a proper gift – but I was overcome. I put my arms around her and hugged her – a hug that was a long time coming. 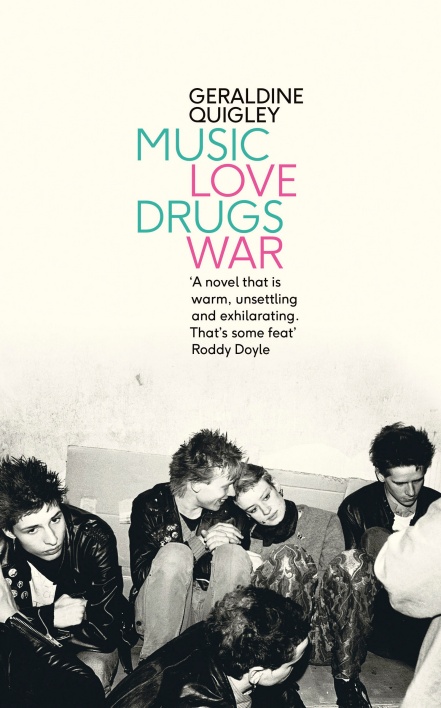