I tried online therapy and the experience was truly surprising

Being a millennial, it’s tempting to eradicate human contact altogether but until now I’ve resisted a total retreat into a screen-mediated existence. One area I have never desired less human contact in is the realm of health care, I had just never considered it before. However the launch of a new online therapy service provided by VideoDoc.ie spurred me to investigate.

My therapy history is vast and multi-faceted. I thought I’d tried every therapy known to man: CBT, psychoanalysis, hypnotherapy, group therapy, reiki, tarot cards (they’re therapy if I say so, alright?) but now here was a hitherto unknown therapeutic outpost I had yet to explore.

The service came about when psychologist, Jason Brennan teamed up with VideoDoc.

“It’s brand new so it’s still getting into people’s minds as an option,” he tells me. “It came about because the online (GP) doctors were finding that every tenth session was a mental health issue. So people were already coming on looking for some support and our online doctors didn’t really have anyone they knew personally that they could refer them to. And one of the many beauties of it is that it is so accessible. Think of people in rural areas who may find it difficult to find a therapist in their area for a start or they may know the therapist in their area personally. So this gives them the option to do this with someone who’s not in close proximity.”

Psychotherapist and author, Brennan is Irish originally but spent nearly two decades abroad expanding his knowledge and experience. In New Zealand, where he was based for just over 16 years, he set up his first practice

“I saw people suffering from anxiety, depression, grief and stress – I was there for the whole of the recession and of course there was a lot of stress in that time. Particularly in business and in teams – as well as at home. There were a lot of businesses closing down.”

This lead Brennan to set up a firm providing short term counselling EAP – an employee assistance programme – for people to cope with stress in the work place.

“I got a name for myself in stress and resilience. So I was asked by a number of sports teams to work with them. I was the mental skills coach for one of the top teams in New Zealand, they had 12 current All Blacks on the team. So I had access to some really top level sports people.”

After nearly three seasons with the team, Brennan moved first to Sweden and then back to Ireland just earlier this year.

“I’m Irish and I’d been away for about 18 years. It was a long time though it didn’t feel like it. I came back to be closer to family.”

We tend not to prioritise our mental health, often it falls under the heading of an indulgence rather than an imperative.

The timing was fortuitous as the book he’d co-written with Brent Pope, Win was also just launching.

“It’s all about strategies for mental health in sports and for life really.”

The timing was also great as it enabled Brennan to create an audiobook for Win which he feels is a great way to bring mental health skills and messages into people’s lives in a way that is more organic, not to mention more convenient.

“When I do my talks, I’m always trying to promote strategies for mental health – I call it mental skills for mental health. You can learn these skills that you can practice and make a habit so that when you need them, you don’t have to scramble round they’re right there. I always talk about Stephan Fry. He was told he needed to lose weight. Now, he hates exercise but he discovered audio books. He’s a voracious reader. He’d go for a walk with an audiobook and he’d be gone for hours and he lost the weight. So I always tell people, you don’t like exercise, listen to something and you won’t even notice you’re doing it.”

Accessing mental health services is a real sticking point in Ireland. Our services are under strain. We, as individuals, are also liable to put up road blockers to seeking this kind of care. Sometimes it’s subconscious or even an extension of our illness – at my absolute bleakest time when I was in dire need of intervention (intervention that thankfully I did receive), it was also, paradoxically, the time when I was least able to pick up the phone and take the steps to getting well.

The true is same for less extreme circumstances. We tend not to prioritise our mental health, often it falls under the heading of an indulgence rather than an imperative.

“I’ve been a therapist for twenty years – the hardest part is getting bums on seats,” says Brennan emphatically. “Getting people through the door. As soon as you’re through the door, you’re away.”

“We all know that going to talk to a counsellor, therapist, psychologist works. It’s good for us but it’s difficult to make that decision and… it can be hard to motivate yourself to get in the car or get on the bus. So there can be all these blockages initially to going. Once you get in there, it’s a great experience and you don’t have to be unwell to talk to a therapist. You might just want to change some stuff up and they can help coach you through that.”

The online therapy system addresses some of these practical obstacles.

“You can insert it into your life. You can do it from your house, your office, your car if you want, as long as you feel it’s confidential.”

The service is also more affordable – probably the single biggest barrier to people seeking this kind of treatment. Many overheads are removed so the online session is significantly cheaper.

The sessions are 50 minutes long and include an element of aftercare. Clients receive an email highlighting some of the goals set during the session, along with information on depression and anxiety, stress and relaxation techniques, depending on what’s relevant.

If revealing all your most screwed up thoughts and behaviours online gives you pause, then you’d be right. As we all know FaceTime and WhatsApp are frighteningly hackable. VideoDoc, as a GP service, has a three-year track record in Ireland and the UK and has been through rigorous testing as confidentiality is of paramount importance. While the experience is similar to services like Skype or FaceTime, the software is completely secure and has a top rating. It’s also very rare that the platform goes down, so sessions won’t drop out as is sometimes a problem with Skype.

“You can really get that flow,” says Brennan “If you allow it, it can quite quickly become very interpersonal. And that’s where it needs to go in therapy.”

To use the service, I create an account and sign in to chat and go though basic stuff initially. The therapy catch-up has got to be one of the worst aspects of starting over with any new therapist. It’s that essential talk required at the start of a first session to give them a potted history of your life to date. And sometimes (especially if you’re me), it ain’t too pretty.

With the preamble taken care of, I’m amazed by how quickly I settle in to the session and completely forget about the screen. It’s surprisingly invisible once we’re underway. Perhaps it’s because we’re now all infinitely more accustomed to communicating via screens. Ten years ago, I couldn’t have conceived of remote therapy but now with the kind of schedule most of us are operating with, it truly seems to be a solution to so many of the excuses I usually make to avoid engaging with my self-care and mental well-being.

We talked all about my inability to…. LOL no I’m not going to do that to you, fine reader. That sh*t is for someone being paid to listen. However, I will say this – I found online therapy nothing like I expected. The connection was more or less the same as in-person sessions I’ve done and at the end of the day the most important element of any therapeutic relationship is not the room you’re sitting in, it’s the person you’re sitting opposite. It’s the rapport with the therapist that matters and on that front, it was excellent.

I wore my pyjamas and who knows? Maybe next time, I’ll take the session from the comfort of my bed? Maximum self-care vibes.

Book a session with a VideoDoc online therapist here.

Win: Proven Strategies For Success in Sport, Life and Mental Health is available to buy here or in all good bookshops. 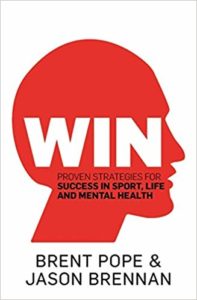 Photo by Dawid Zawi?a on Unsplash