These are the top Twitter hashtags and moments of 2018

It’s been a wild year. Politically and socially, we have seen movements, revolutions and developments which have caused ripple effects across the globe. And Twitter has been there every step of the way.

Twitter is the home of topical conversation. In 240 characters, people can project their voice. Their views are amplified, allowing them to vent their thoughts and find new voices that lie far beyond their home shores.

Twitter has witnessed it all and as the year comes to a close, they are reflecting on the best and worst by releasing the top hashtags that have defined a somewhat tumultuous year. 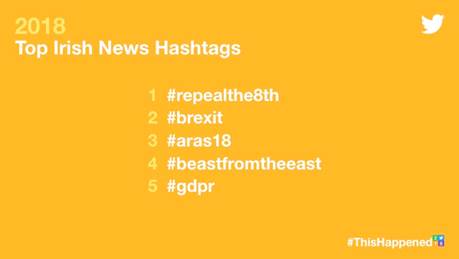 The political landscape has changed considerably in Ireland and this is evident from the number one hashtag for 2018. #repealthe8th was a movement that knew no bounds and became an inspirational moment, not just for our country, but for further afield too. #Brexit, though not on our soil, created waves which are still being felt by the nation. The race to #aras18 was in equal parts controversial and intriguing. The country was gripped and upended by the #beastfromtheeast and the introduction of the #gdpr signaled the introduction of unwelcome popups on each and every webpage you enter. 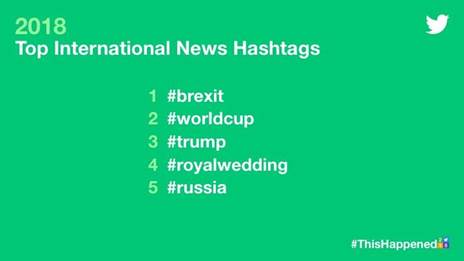 International news also caused a stir on Irish Twitter feeds throughout 2018. Once again, all eyes were on Britain as they tentatively made their way through the minefield that is #brexit. The #worldcup enveloped the hearts and minds of the nation, even though our home team didn’t play a part. Our neighbours across the pond continue to fascinate and scare us, as #Trump manoeuvres his country. And the #royalwedding and #russia round up the top 5. 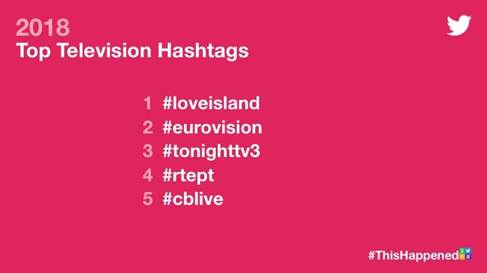 The cultural phenomenon that is #loveisland brought an abundance of think pieces, societal insights and the ‘Do Bits Society’. #eurovision remains a firm favourite. And current affairs programs such as the Tonight Show #tonighttv3, Prime Time #rtept and Claire Byrne Live #cblive continue to generate debate.

Some tweets are more sparkly than others and deserve a very special mention. These are a reflection of the unique Irish wit, the power of communities and the undeniable kindness we possess as a nation.

#StormEmma was a struggle for the entire country. This video from the Mater Hospital showing how their staff were staying overnight to care for patients demonstrated the determination and dedication of our medical staff in Ireland.

Many of our amazing hospital staff are sleeping overnight in the Mater so they can care for patients tomorrow. #StormEmma

The top tweet from the national broadcaster RTÉ showed that nobody should mess with a certain Irish great-grandfather. The video showed 85-year-old Denis O’Connor tackle and scare off two armed raiders who tried to rob a Cork bookmaker.

Quoted tweets proved extremely popular in 2018, causing quite a number of different conversations.

Earlier this year, Twitter user @kwili1046 shared this video of a retired Royal Marine undergoing life-changing therapy for Parkinson’s Disease. It became one of the most moving and discussed moments on Twitter in 2018 with nearly half a million likes and over 15 million views.

A retired Royal Marine suffering from the degenerative Parkinson’s Disease. Watch the moment his world was changed forever after undergoing a life-changing therapy for Parkinson’s using Technology pic.twitter.com/amODSeE8IJ

And this, just because it’s Cher.