To Register or Not to Register?

Illustration of a toaster.

To register or not to register??Katie Phelan sees the sense in gift guidance…

In the dark days before ASOS, the Argos catalogue was my major vice. Initially, I used its pages as appendices to an annual letter: Dear Santa, I have enclosed page 1040 of the Argos catalogue. On it, I have marked the Barbie house (with pool) and convertible. I also want the make-up kit on page 723, as well as the inflatable couch and mini fridge on pages 810 and 811 respectively. Also, I don’t think Argos sells ponies, but I’d really like one of them too…

But then I grew up, a little, and the Argos became a nightly read. As soon as I started to think about my impending marriage to David McGuinness (we were 11 and it was a given that he’d ask me any day…), I began to compile an Argos gift list in the journal where I sketched dress designs for myself, and for my 15 bridesmaids. David and I would have the best Manchester United bed linens in the 1994 edition; and I would have the best Elizabeth Duke cubic zirconia wedding ring his pocket money could buy. 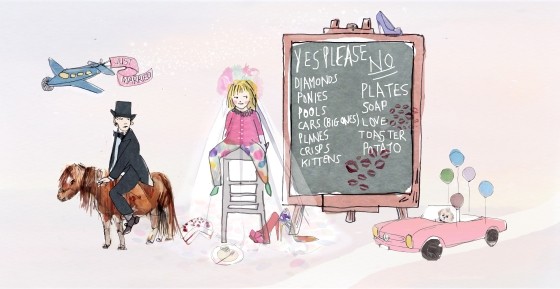 Such was my early induction to the wedding gift list or, as it’s now known, the gift registry. When a good friend of mine e-announced his engagement earlier this year, I baulked at the postscript: Sarah and I are most grateful to friends and family who wish to bestow a monetary wedding gift. Please use the following link to access our PayPal registry. I could hardly believe it. This ploy was either completely ingenious – an instance of post-consumerist panache – or, it represented the pinnacle of mercenary greed and impudence. When I asked my friend about his motivation, he didn’t flinch. He simply asked me if I knew a single couple who didn’t cohabit prior to their nuptials. No, of course I didn’t. Even my parents, who got married in the early 1970s, had a bed-sit on Camden Street.

The truth is that, for most modern Irish couples, a set of bone china, a steam iron or an electric hammer drill is utterly superfluous. If they don’t already own such things, well then perhaps they don’t want them. As my friend reminded me: My fiance?e and I rented for years before we met. We accumulated five houses worth of stuff that we’re now selling off in order to help pay for the wedding. Why would we want to replace four perfectly good toasters with yet another perfectly good toaster?

Wedding gifts are best when they can actually be used. But the usability of a gift does not have to be at the expense of its thoughtfulness. If a wedding is a profound event for the protagonists, and not necessarily for their guests, why not take the nod from the couple in question and bestow a gift that they’ll appreciate and employ. Besides, gift registries are more than just a convenient postscript to a big announcement; they serve to gratify the guest and copper-fasten his or her supporting role on the big day: I gift, therefore I am – or something to that effect.

This article originally appeared in Volume 1 of BASH. Volume 4 is on shelves now.