We are used to celebrities oversharing their lives. But sharing someone else's as they fight for their life might be a step too far, writes Amanda Cassidy

TV presenter Kate Garraway has shared the heartbreaking last text messages her husband Derek Draper sent her before he was put into an induced coma.

The political lobbyist was desperately sick with Covid and spent over a year in hospital needing round-the-clock care. Now, recovering at home, but still very unwell, Derek’s wife has been sharing the messages they exchanged while he was struggling to breathe.

In her new memoir The Power Of Hope, which is being serialised by the Mail on Sunday, Garraway charts the difficulties they faced as a family as he was taken away in the ambulance.

Ahead of the book’s release, the Good Morning Britain presenter explains why she decided to share the messages; “I’m painfully aware that Derek would have wanted to tell his own story – and one day he still may.

In this book, I have tried to do him – and all those who love him – justice.

The help I have received from his brilliant team of doctors and specialists, and from people everywhere, has kept me going. By sharing this with you, I pray that it is in some way useful in tackling the challenges in your life. We all have our own Covid stories.  This is mine.” 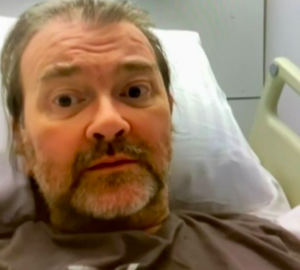 But the problem is that it isn’t her story- the texts are Derek’s and they are pitiful. Some images were shared on national TV during times when he was unconscious.

“It’s mental torture.” He writes in one message. “I need a break. I want to be put unconscious.” In another that Garraway shares, her husband writes. “I don’t think you realise how bad this is. It is unimaginable. I literally feel like I’m drowning and every breath is my last. Please tell them both I love them.”

I’d like to think my loved ones would never distribute pictures of me during some of the worst times of my life, sick and frail – especially without my consent.

Of course, that isn’t to take away from the shock and pain Garraway and her family were going through. But sharing pictures of Derek in a hospital bed, eyes closed, tubes everywhere is uncomfortable to see. In some, he looks confused and disorientated.

Even presumably now with his permission, this is still a very sick man – a vulnerable person. In one of the texts, he starts it with “Not for the children.” His wishes were clearly not to frighten them.

The couple has two children Darcey, 15, and Billy, 11. And while Derek is now home, the family has been warned by doctors that he still faces a ‘long and grueling’ fight ahead to full health. In other words, he is still not himself.

Last week, Kate told viewers on GMB: “It has been wonderful having Derek at home. There have been lots of little positives – moments of recognition and reaction.”

“On an emotional level, I hope readers will also draw something from how we, his family, have struggled to cope.”

I can’t help wondering how Derek’s wider family feel about such intimate pictures and thoughts being sold by his wife. Even with their blessing, Derek remains a vulnerable person. Had he gone on to fully recover and wanted to tell his own story, it would have been more understandable.

By this logic, anyone could sell someone elses story and dress it up as a desire to help others.

The fact is that Kate is right – this isn’t her story to tell. But equally we should take a step back and wonder why we are so keen to get a glimpse into such a sad and personal struggle. We can justify it in the name of concern, or an important life lesson, but if that was the case the book would surely be distributed for free.

Money in exchange for someone’s heartbreaking and most frightening moments feels exploitative. Sadly this is happening more and more in celebrity and some look for new ways to make their stars shine.

Of course, it doesn’t take away from the difficult struggle Garraway and her young family ensured. She writes touchingly about trying to support her husband from afar.

“Twice a day I spoke to Derek while the staff placed a phone by his ear. I would chat to him for as long as I could, telling him about holidays we were going to have, things we would do with the children, things we would do to the house and beyond. I didn’t know if he could hear, but I could imagine how lonely he would feel if he could hear and not know we were all rooting for him.

‘You’re somewhere safe,’ I would whisper to him. ‘You’re being looked after. I’m in touch with everyone. I’ve been speaking to your father this morning…’

Anything I could think of to say that would encourage him to survive, to come back to us, to leave the dark space he must have been in.”

The problem is that the whole world has now been exposed to his dark space. And that doesn’t sit right.

January: What to watch, stream, read and listen to this week