The Most Moving, Political Moments From The SAG Awards

At a time when the world is in the midst of massive upheaval and change, award season can seem insignificant; glitzy galas, full of designer dresses and beautiful people collecting trophies, but gone are the days when an award show can be dismissed as mere fluff or fodder. This year, in particular, the talented actors nominated are using the ceremonies as a vital political platform – and at the SAG Awards last night, it was the powerful speeches condemning President Trump’s latest chaotic order barring those from Muslim-majority countries?from the US that took centre stage.

Now more than ever, it is crucial that we see films that reflect everything that Trump’s regime is against?- unity, hope, and the power of positivity and celebrating difference. Last night’s SAG winners reflect that audiences are responding to these moving tales on screen, and also that the actors themselves need to spread this message outside of reels of celluloid – they have a vast platform and can always find the right words to empower and unite. Below, we’ve rounded up the best of these moments from the night, and can only hope that these impassioned statements?continue over the coming weeks as we prepare to fight against Trump’s hate.

The diverse cast of Orange Is the New Black

On behalf of the Orange Is the New Black cast, who won Best Cast in a TV comedy, Taylor Schilling reminded viewers that the actors were diverse people “representing generations of families who have sought a better life here.”

“A lot of people are saying right now that actors should keep our mouths shut when it comes to politics. But the truth is, no matter what, actors are activists because we embody the humanity and worth of all people.” [email protected] wore her activism on her sleeve, literally, at the #SAGawards tonight

The most important element of Scandal star Kerry Washington’s SAG gown was the detail of the safety pin she wore on the night.

The win for Hidden Figures? 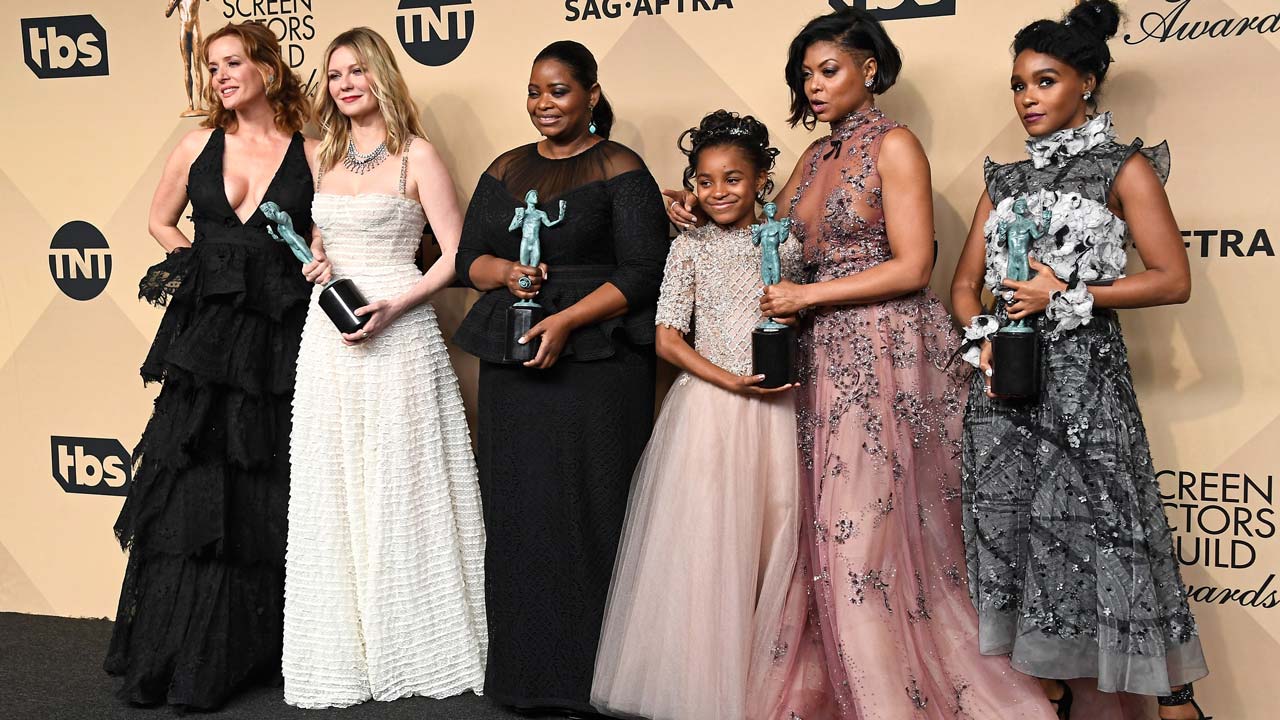 The cast of the moving drama based on a true story about three women who played an integral role at Nasa won for Best Ensemble in a Motion Picture. Accepting the award, star Taraji P Henson said: ?This story is of unity, and this story is about what happens when we put our differences aside … Love wins.?

Lily Tomlin: “We could all go out and really change things.”

Awarded the lifetime achievement award by Dolly Parton, Grace and Frankie‘s Lily Tomlin took a light-hearted tone before adding: “What should I put on my next sign? Global warming, standing rock, LGBT issues, Chinese missiles, immigration…We could all go out and really change things.”

When accepting his Supporting Male Actor award, visibly upset?Moonlight‘s Mahershala Ali – a Muslim actor – ‘spoke about effects his role and the relevance it had in society today. “What I’ve learned from working on Moonlight is you see what happens when we persecute people. They fold into themselves.”

What a passionate speech by @DavidKHarbour on behalf of the @Stranger_Things ensemble! #StrangerThings #sagawards pic.twitter.com/EhTMXNsOTx

Netflix series?Stranger Things won Best Ensemble in a Drama Series – one of the biggest surprises?of the night as it took out none of the individual prizes – and actor David Harbour’s acceptance speech – and his co-star Winona Ryder’s reaction to it – promptly went viral.

I will cherish this Winona mosaic forever. #SAGAwards pic.twitter.com/XFv3jq2oqj

?We will repel bullies, we will shelter freaks and outcasts, we will hunt monsters, and when we are lost, we will punch some people in the face, and we will do it all with soul, with heart and with joy. We thank you for this responsibility,? he said.