The Book That Changed My Life: The Bell Jar

In my almost 29 years on this earth, the power of the written word still surprises me. Each time I read a paragraph, verse, or a’sentence?that moves me, I think how lucky we are, despite times of strife, to be blessed with, writers, authors, poets who can change?the way we view the world with the stroke of a pen. To that end, everyone likely remembers the first set of words or book that had a profound effect on them; the piece of work that went beyond the realms of storytelling, touched the soul and altered their life view forevermore. ?It was Sylvia Plath and her first and only novel, The Bell Jar that did this to me. I was 17, and it was in English class that we started to study confessional?poetry, a topic I still love to this day. Being one of the greatest self-confessional poets, Plath came up first. I hadn’t known much about her life, save for its tragic end, yet I found myself inexorably drawn to the work of women who seemed to exist on the verge of a complete nervous breakdown; her happiest moments always tainted with the heavy burden of her mental illness. Her words, often potent, frequently angry and always full of volatile, colourful emotion instantly drew me in.

I devoured every single poem before stumbling?on The Bell Jar one winter’s night and read the entire thing in a single sitting (and again the next three nights after). Fifty-three years after its publication (under?the?pseudonym?Victoria Lucas in 1963), the semi-autobiographical story, that centres around protagonist?Esther Greenwood, a college student who travels to New York to work on a renowned magazine, who slowly descends into mental illness still has people talking. She is young and despite having achieved much success, she feels bleak and unaccomplished; a phoney who never quite fits in. 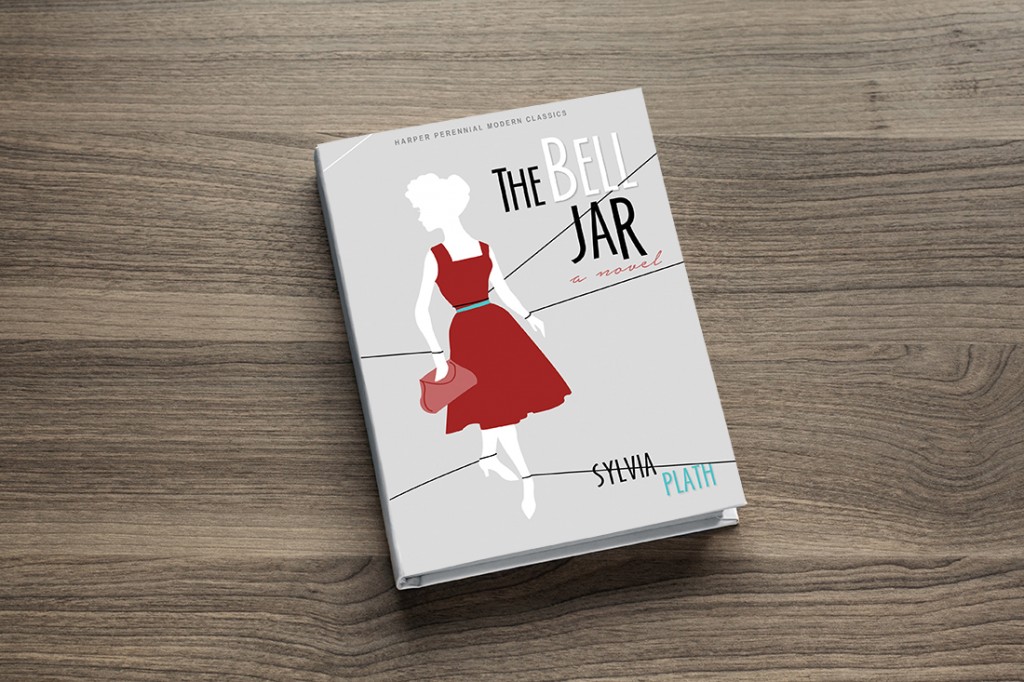 So, why did it affect me so? I didn’t battle depression, yet, just like the author, I was smothering in my own feelings of self-doubt, constantly torn between the idea that I was talented enough to write for a living and feeling that I had no real place in the world. Plath had depression, I had Cerebral Palsy, yet I could relate to her struggles; the yearn to succeed, while feeling bound by her life’s (and society’s) rules and restrictions. In particular, Plath’s ?fig tree? metaphor for the lack of dimension often demanded of women’s lives is one of my favourites. Esther finds herself ‘starving to death? when she is unable to choose which metaphorical ?fig? to reach for in life: should she choose tranquil domesticity and family life in the suburbs (as she feels is expected of her), a life of travel or a career as a poet and writer? She simply cannot decide. Eventually, every fig rots and falls to the ground such is her indecisiveness. She simply cannot make a decision. Therefore, all her options slowly wither?and die, and she along with them. 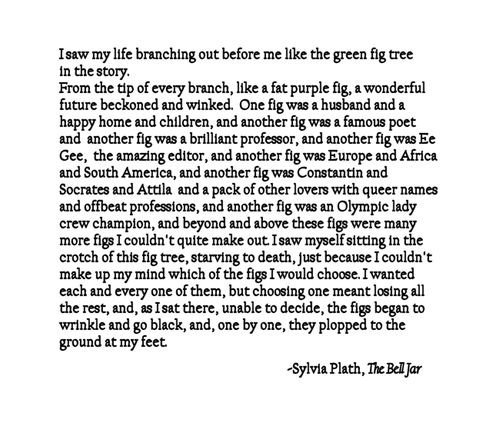 An excerpt from The Bell Jar

That indecisiveness, the uncertainty, the fact that she felt an imposter but still depended on the approval of others hugely resonated with me and still does. I had never encountered a narrative voice like hers; fumbling between childlike goofiness, self-doubt, yet full of certainty too. Esther wants everything; she is no doormat, she defies the roles expected of her, even losing her virginity on her own terms. ?Her voice was, I felt, so like my own voice; the one that I couldn’t get out on paper. That, I thought, is how I want to write. Of course, I can’t write as she does, but she inspired me to keep trying, to find my own. Some critics are quick to bemoan the book’s dark subject matter, but I’ve always felt its message ultimately is one of hope; in the story, she has an enormous capacity for hope despite the obviously harrowing moments in her life, and every time she tries to break free of the bell jar.

The tragic thing was that she couldn’t break free in her real life; six months after publication Plath was gone, only thirty, leaving behind two young children, work that was to be renowned the world over – a woman on the verge of true greatness as she so desired in her novel. I wonder if she had been born in another time, could she have been saved? Would she care less about others approval and have the foresight to see how her words would help so many as they did me?

Almost 12 years after I first read the book, I get all of the above out of it still, which can also be summed up in a single sentence: it made me feel less alone. That’s what the greatest art will do. And so I know it by heart, its words going through my mind, while I’m wide awake at 4 am. ?I collect it obsessively; I own every edition available to buy, this story that will forever be my favourite and still I think, Plath was just like me, like us, only she didn’t have The Bell Jar. I wonder if she had, how different her life might have been.

Which book changed your life?