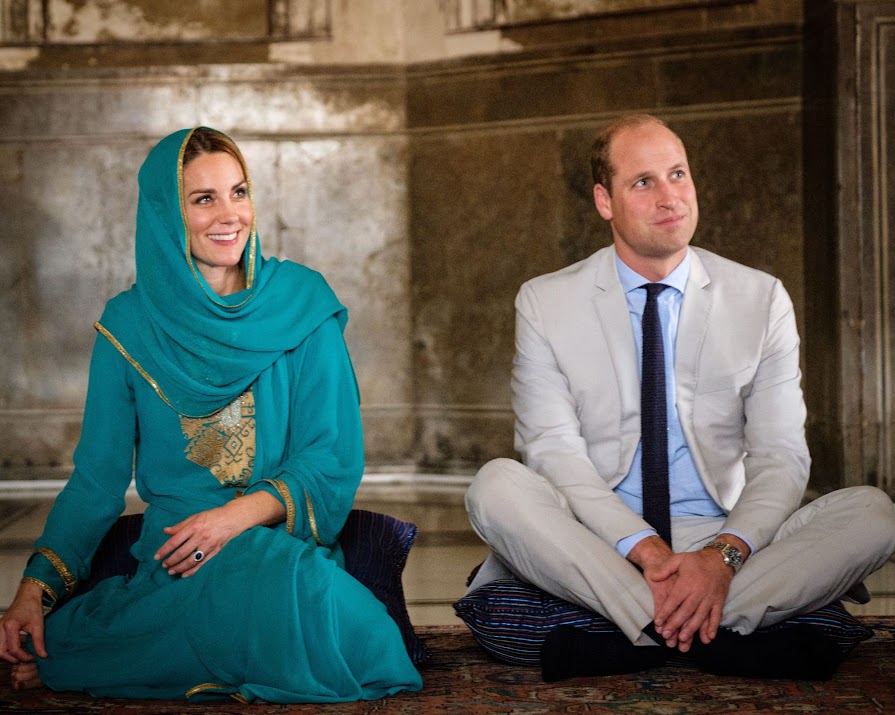 Kate Middleton and Prince William have wrapped up their five-day tour of Pakistan, the first royal visit to the country in 13 years. The couple is said to have thoroughly enjoyed the trip, where they played cricket, the national sport, travelled into the Hindu Kush mountains, wore traditional headdresses, and took a rickshaw to a black-tie reception.

Over the past five days, the Duke and Duchess of Cambridge brought their trademark magic to the country, through their respectful and elegant wardrobe choices, the places they visited, the causes they came to learn more about, and the people they met. They looked genuinely happy to be there with onlookers noticing how relaxed they were throughout.

Kate’s wardrobe took a shift with more experimental pieces and brighter colour palettes; she packed up to three outfit options for each day, many of which were by Pakistani designers. Below are some of the highlights from their royal visit:

For the first day, Middleton chose a special look: she wore an ensemble that recalled the late Princess Diana’s visit to Pakistan back in the ’90s, choosing an ombré dress by Cathrine Walker, one of her favourite designers and paired it with matching pants underneath.

They also joined dog handlers at the Army Canine Centre in Islamabad, as they trained dogs to recognise and scout out hidden explosive materials, before taking some of the puppies – Salto and Sky – through their paces on an agility training course.

On the second day of their five-day tour of Pakistan, Kate Middleton and Prince William met with the country’s Prime Minister, Imran Khan. (Khan was reportedly a friend of Princess Diana), where Kate chose an eye-catching emerald coat-dress, also by Catherine Walker. Then she added Pakistani labels to balance out the rest of her ensemble, including cream trousers from Maheen Khan, earrings from Zeen, and a printed scarf from Bonanza Satrangi.

The couple also visited the Badshahi Mosque, the most iconic Islamic site in Lahore, set in the heart of the Walled City. they toured the mosque and courtyard, before joining a discussion with faith leaders to learn how they are promoting interfaith harmony within their communities. Prince William donned a beige suit and Kate wore a traditional turquoise and gold Maheen Khan outfit.

They also joined Wafia, aged seven, for tiaras and tea at the Shaukat Khanum Memorial Cancer Hospital, Pakistan’s largest tertiary care cancer hospital. In 1996 and 1997 Diana, Princess of Wales visited the hospital so it was natural that The Duke and Duchess also visited the children’s ward at the hospital, where they spent time with patients undergoing treatment.

The Duke and Duchess of Cambridge joined a match at the National Cricket Academy with children participating in the British Council’s DOSTI programme (Dosti means friendship in Urdu) which promotes sport as an integral part of child development, and encourages social integration, increased self-esteem, and the development of important life skills in children. Kate wore a white shalwar kameez by Gul Ahmed Fashion.

The royal pair visited a settlement of the Kalash people, to learn more about their culture and heritage, joining children and young people from the tribe in the village square to hear how the Kalesh coexist alongside the other communities that call the region home. They both sported traditional headwear and watched a Kalash dance performance.

Kate wore a glittering green Jenny Packham dress with Jimmy Choo sandals for a visit to the iconic Pakistan National Monument to celebrate the very best of Pakistani music and culture, as well as highlighting the prosperous UK-Pakistan relationship.

Finally, they shared a highlight reel of their visit on social media.