T-shirts in the girl’s section had ‘Big Smiles’ written in bold. The boy aisle told its baby troops to ‘Explore The World’

Gender-neutral clothing for children is more popular than ever but gender stereotypes are still being perpetuated by retailers. Amanda Cassidy looks at why boy’s clothes still emphasise athleticism, intelligence and trouble, while girls gear is all about beauty, hearts and flowers.

‘Pretty little thing’, the sickly sweet babygro reads, dangling in the baby girl aisle of the supermarket — oblivious to its depressingly gendered and outdated message. Beside it, a pink t-shirt warned all those who came close to have ‘Big Smiles’

Across the way, the boy aisle rallied its baby troops energetically, encouraging them to ‘Explore’. The boys babygro offering was plastered with the writing ‘Big Ideas’ and ‘Boys will be Boys’.

Online too, the choice for girls is too often unicorn-clad, sparkly and otherwise vacuous and ditzy. The little boy clothing is, in contrast, considered fierce with ‘Roarrrr’ and ‘Surf Star’ or ‘Genius at Work’ slogans. 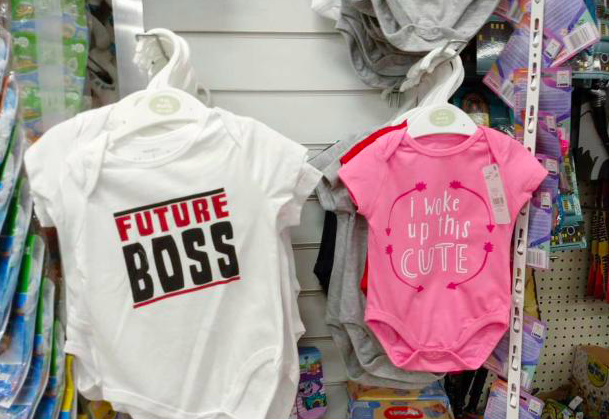 The attitudes of kids and their parents have moved on. It’s now time for brands to catch up.

‘Be smart’, ‘be loud’, ‘be energetic’, the messages seemed to say, while the little girls should remain giggly with plenty of Big Smiles. In other words, be sure to remain simply pretty little things.

Sparkle! And that’s an order.

Welcome to the world of subliminal gender stereotyping and the messages we are setting for our baby boys and girls before they can even read. How can we treat girls and boys so differently from birth and wonder why they behave differently?

Of course, there will be those who point out that nobody has to dress their child in stereotypical gendered-colouring or messaging. And yes, there are lots of other choices and options out there, but the wider issue is how many cues we still unconsciously take from society. These are the messages plastered across clothes that reinforce society’s expectations.

As they grow, children, and all those reading the messages around them, are absorbing the nuances of what society expects of them. Loud and smart or pretty and placid?

And it isn’t just the children. As a 40-year-old woman shopping for cosy pyjamas online, there is no shortage of clothes that infantalise. Cloud-patterned, rainbow-clad, happy-clappy sunshine and yes, more unicorns.

“Have you ever seen men’s PJs adorned with little piccies of tractors or dinosaurs?’ tweeted one person recently during a discussion on the issue. 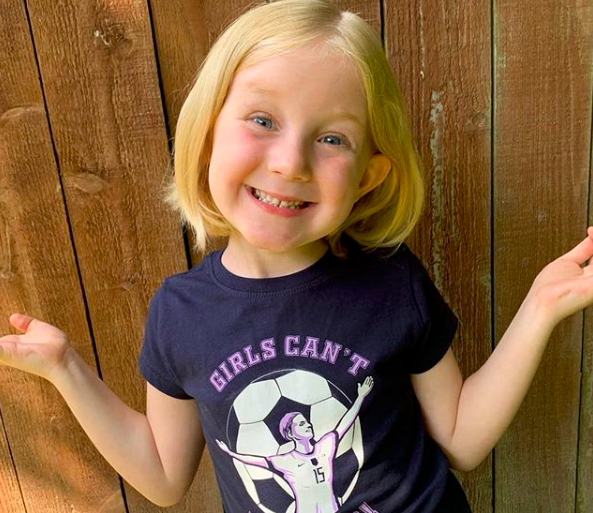 Both boys and girls deserve to see, hear, and wear better messages

US-based Courtney Hartman found it difficult to dress her purple-loving son any time she went shopping for him so she took matters into her own hands and developed her own clothing line, Free To Be Kids. Her tagline is ‘positive fashion for amazing kids’ and her first creation was a purple t-shirt that said  ‘Mr Nice Guy’.

She says her site, which includes LEGO hairclips, avoids all those silly gendered clichés.“We offer children the messages that big retailers don’t. For every ‘I’m Too Cute To Do Homework’ shirt that tells our girls to focus on beauty over brains, we hit back with ‘Smart Girls Club.’ 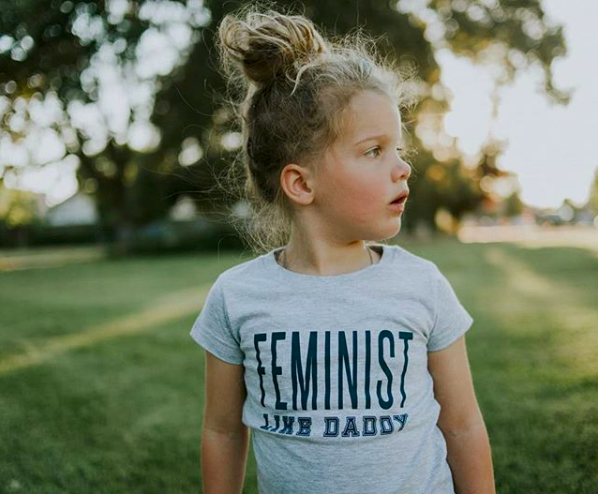 For every ‘Troublemaker’ or ‘Eat My Dust’ shirt that portrays our sons as rowdy and insensitive, we design a ‘Mr. Nice Guy’ or ‘Love Is My Superpower.’ We believe passionately that both boys and girls deserve to see, hear, and wear better messages.” 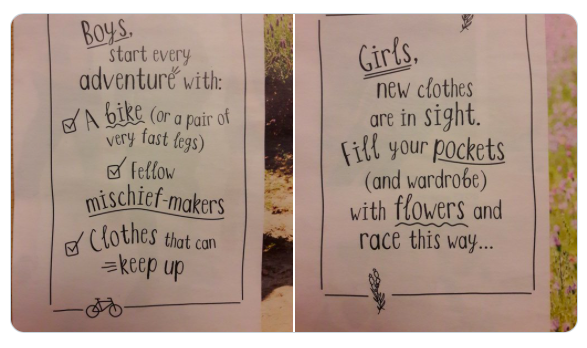 Last year, popular children’s clothing line Boden came under fire for its ‘shocking’ sexism in gender stereotyping in its children’s catalogue. The Mini Boden catalogue shows on one page a boy with a bike next to the words “Boys start every adventure with a bike (or a pair of very fast legs)”, while on another page girls are encouraged to “fill your pockets (and wardrobes) with flowers and race this way”.

In 2017, Clarks were criticised for a girls’ shoe range named Dolly Babe whilst the boys’ were called Leader. The options for tweens get even worse — little girls are bombed with Top Model branding, nail kits that encourage them to ‘shimmer and shine’ and to ‘go glam’.

How we design and market children’s clothes, toys and advertising has a big impact on how they perceive themselves. Aspirations are shaped from a young age — children need to be allowed to grow and explore without being told their limits or gendered expectations from the get-go.

We must challenge lazy attitudes and dated stereotypes. The attitudes of kids and their parents have moved on.

It’s now time for brands to catch up.