Geena Davis will forever be the Thelma to Susan Sarandon’s Louise.

Ridley Scott’s now iconic Thelma and Louise turns 25 this week – we can’t believe it either – and to celebrate, stars Susan Sarandon and Geena Davis reunited on the talk show Good Morning America, taking a seat in the distinctive 1966 Ford Thunderbird used in the film.

Sarandon, who was 44 when Thelma and Louise was released in 1991, is now 69 while Davis is 60 – how incredible do they look? We’ll have whatever they’re having, please.?Sarandon sported a silver satin Teamsters bomber jacket and a pair of classic aviators while Davis looked ever so chic in a light pink form-fitting dress. 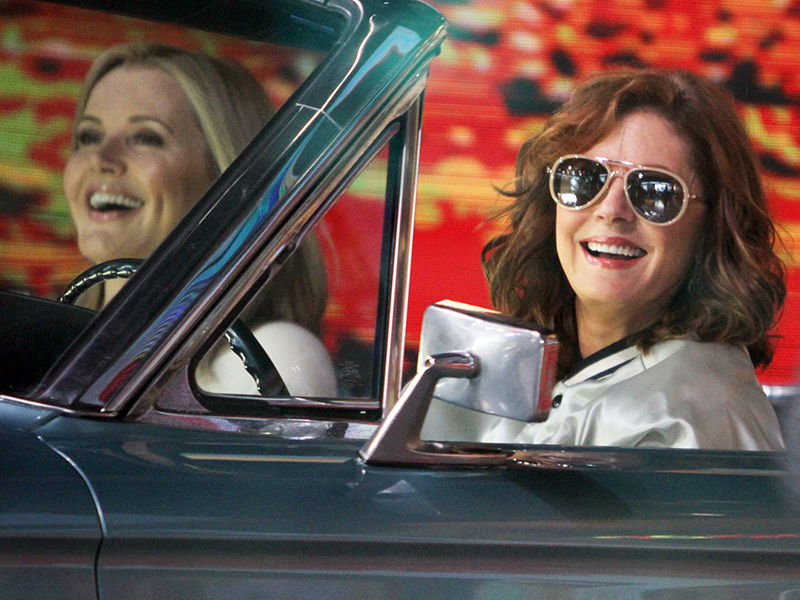 Exhilarating, fiercely liberating and bold for its time, the film told the story of two put-upon women who embark on a getaway road trip, after Louise (Sarandon) shoots a man who has tried to rape her friend Thelma (Davis). Initially branded controversial upon release (well, it did come out in the early nineties), it struck a chord with critics and viewers alike, and it’s now considered a feminist classic.?Screenwriter Callie Khouri deservedly won an Academy Award for her screenplay.

Previously?Sarandon had spoken of her hopes that the film would change the industry for women, and see Hollywood embrace strong female leads as a whole and expressed her disappointment when this didn’t happen at the time. Certainly we’ve seen more than a few leading ladies take this helm since the film’s release over two decades ago, and almost every female friendship in a Hollywood film since has undoubtedly been inspired by the movie.

The pair – who are the selfie originators, BTW – also posted this tweet in 2014, sending fans into a tizzy.

Both actresses went on to have lucrative careers after Thelma and Louise, and Sarandon was recently announced as the new face of L’Oreal.

Stuck for a film to watch this weekend? Stick this on, and if you’re not partial to the movie’s ending, James Corden has a few ideas about that.