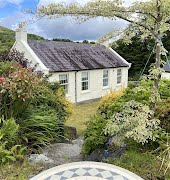 Articles about Solange Knowles may still stress the SEO-boosting fact that she is Beyonc?’s little sister, but after her wedding yesterday the 28-year-old singer has secured her place in the fashion hall of fame, with two outfit choices that were jaw-dropping in their daring simplicity.

E! News broke yesterday’s’story that Solange married her video director fianc? Alan Ferguson in New Orleans. Ferguson is 51-years-old and the couple have been seriously attached for some time. Solange has been very open about the relationship on social media and scatters her Instagram with reference to their time spent together. The young DJ has been married before. In 2004 Solange wed the father of her son. She divorced Daniel Smith in 2007.

For the first part of the day Solange wore a jumpsuit with a cape and plunging neckline. Ferguson wore a white suit and groomed beard. The couple cycled to the church – the Holy Trinity Church – on white bicycles. Is this a new wedding trend the Bashlings spy?

The second part of the wedding was a Vogue magazine exclusive extravaganza, with an outfit change – this Humberto Leon for Kenzo gown – and a family portrait, see above, that may actually break the internet. Close family and friends donned stunning white outfits while assuming serious expressions and poses inspired by the Italian artist Vanessa Beecroft, E! reports.

It was a family affair with Bey and Jay Z showing up with Blue Ivy and mom Tina Knowles in attendance. It seems that infamous elevator incident is long behind them? The weekend leading up to the wedding was relaxed, according to Us Magazine, with the happy couple sharing a DVD night with Beyonc? on Friday.

While we wish Solange and Alan the best honeymoon possible, can we ask that our new favourite style icon keep the sartorial updates coming from whatever tropical paradise she escapes to?