Why The Sirtfood Diet Is About To Explode

With a new year comes a new fad diet. 2013 saw the rise of the 5:2 diet but in 2016, it’ll be the ‘Sirtfood Diet’ that gets all of the headlines. Designed for people who want to shed pounds without putting it all back on the minute you come face to face with a bag of peanut M&Ms, newcomers will be glad to hear that it’s not all quinoa and spinach leaves. You can actually drink red wine on this one. And chocolate (once it’s 85% cocoa). Hurrah! But before you head off to the nearest boozer to put an end to your dry January aspirations, let’s explore the science behind this new trend.

The brains at the helm of The Sirtfood Diet (which, handily enough, is also a book) have put together some convincing research demonstrating how certain foods exacerbate your fat burning capabilities. Rich in ‘sirtuin activators’, hence the name, these foods put a fire under your metabolism, helping you to build muscle and do away with unnecessary fat. They also protect against inflammation and disease. Of course lots of diets can help us lose a few pounds, but we’re often left hangry – at least for those first few demonic days while our bodies adjust – and they’re impossibly difficult to stick to. Having been extensively tested, however, this meal plan is said to leave you feeling completely satisfied, and not at all like Joan Collins diving on a Snickers. Not only were the 40 people who were put on the diet losing pounds while remaining satiated, but their energy levels also didn’t suffer and neither did their immunity. What’s more, thanks to the muscle building nature of sirtuin activators, participants’ muscle tone remained strong while other calorie-cutting diets can have the adverse effect of reducing muscle tone. 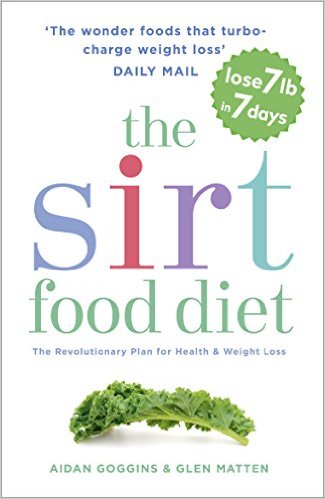 Authors Aidan Goggins and Glen Matten didn’t realise just how effective their Sirtfood diet could be until they put their 40 participants who regularly exercise to the test over a course of seven days. The diet, which requires roughly 25% fewer calories than the standard daily recommendation, proved overwhelmingly successful, with participants continuing to burn fat and lose weight after their seven-day trial.

As far as recommendations on how to trial this soon-to-be-huge lifestyle go, you’ll have to dip into the book. Unfortunately, we fear popping a bottle of red to wash down a bar of Lindt won’t quite yield the results you’re after.