The most sinister side of the 10-year social media challenge

Remember the ice-bucket challenge and the no-make-up selfie? We all love a good excuse to upload pictures of ourselves online – that’s why the 10-year challenge proved just so popular in the past few weeks. But is posting our ageing mugs online turning us all into mugs? Amanda Cassidy reports.

How. Is. It. 2019. Already? Posting pictures of ourselves in 2009 and comparing them to now is a shock to the system. But what is more shocking than our questionable fashion sense a decade ago, is how much the world has changed in the interim. In 2009, I wasn’t married, or pregnant, and I was deep in my boho phase (thanks, Sienna Miller), but the starkest difference is that I wasn’t yet glued to my smartphone 24/7. In fact, I didn’t have even have the Internet on my phone. The emergence of the 2009 versus 2019 trend has thrown into focus not only who we were a decade ago, but also what our world looked like. 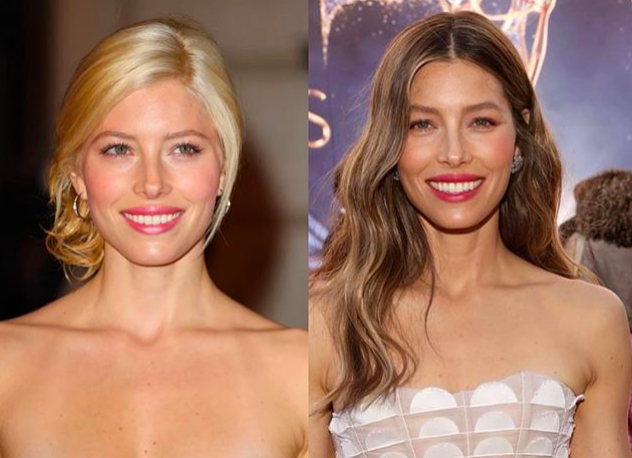 Now we live inside online communities. Our lives are airbrushed sufficiently to allow others a carefully choreographed view into how we live, love and work. Our heads are in the cloud. But more significantly, the world of big data has also changed dramatically. Now our information is becoming a very valuable commodity. These are the years that we finally caught a glimpse of the ugly world of data-mining. Breaches in security and data exploitation for political means was something our 2009-selves could never have imagined.

5 million people over three days shared photographic evidence with Facebook of their ageing since 2009. And then a tweet went viral. Kate O’Neil asked, “How all this data could be mined to train facial recognition algorithms on age progression and age recognition?” 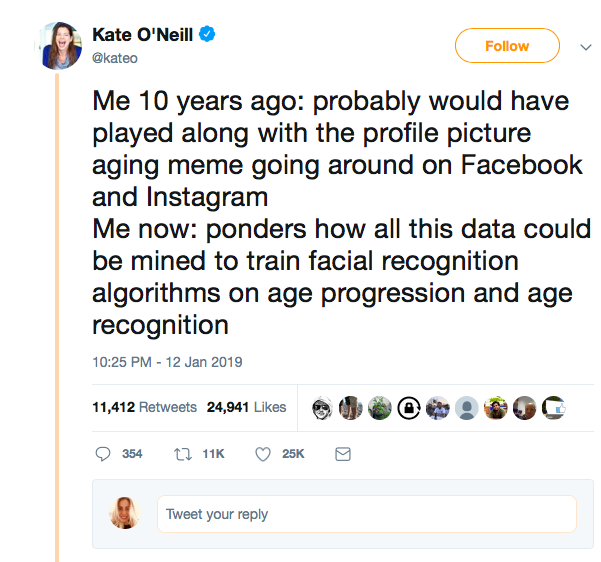 While it may not be the reason it all kicked off (Facebook categorically denied it had anything to do with starting the challenge), the realities of biometrics and specifically facial recognition would send shivers down your spine.

It seems we are fine with our likes and clicks being monitored and sold to the highest bidder, but when it comes to tracing our faces from social media out into the real world, that’s when we get spooked.

Amazon has spent the last year defending its decision to sell a real-time facial recognition system to US law enforcement. Just like its online commerce platform democratised retail, it now wants to do the same for surveillance. Find it hard to imagine a world where your face is tracked? Well, Blade Runner may have been set in 2019, but we are not far off living in a society where our every movement is analysed.  Right now, some of your favourite shops are using facial-recognition software. It is marketed as a tool for cutting down on shoplifting and sold to the public as a security tool, but it is also completely unregulated.

Nobody has any idea what data is being collected, how it is being stored, for how long, or who has access to it. Coupled with your online data footprint, this gives access to not only what you like to buy, wear, or eat, but your location and where you are at any given time. 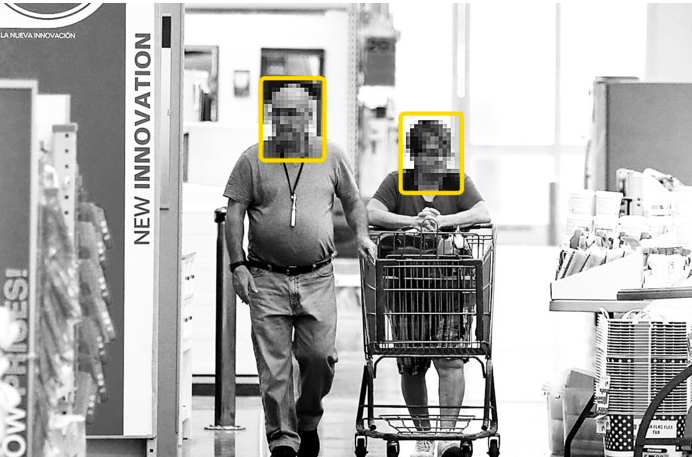 Before you think I’m exaggerating the tide of surveillance that is coming down the tracks, look to China. Yes, we come from completely different political spheres, but just this week it was reported that a new app has been developed that displays a warning when people are 500 metres from someone who’s in debt. As part of the governments ‘social credit’ policy, this is essentially a map of “deadbeat debtors,” according to Chinese state media, and shows you the debtor’s exact location, though it’s unclear if the displayed information includes a name or photo.

Hands up who else is goosed if this type of lark starts oozing over to this side of the world! And while biometrics are already used in airports internationally and among law enforcement, the lack of safeguards and the centralisation of huge amounts of information raises the potential for abuse and ever-expanding mission creep.

This is one genie that will be impossible to put back into the bottle. You may think you don’t care if you are flagged, say going into the supermarket or shopping in Dundrum, but you might think twice when you are going to see your psychiatrist or to take part in a protest. No matter which way you cut it up, our privacy will be compromised.

Right now, uploading mad pictures of our cute younger selves is fun and silly, but it isn’t harmless. We shouldn’t underestimate where the information we share online will end up. We should all think about a decade from now, the 2019 versus 2029 challenge –  and how our world will have changed.