‘She didn’t blink’: Why Elizabeth Holmes’ body language is a talking point

When it comes to workplace interaction, both verbal and non-verbal communication is important when we are in a professional setting. Upon meeting someone for the first time, you are unconsciously assessed for warmth (empathy, likeability, caring) and authority (power, credibility, status).

“Warm” leaders connect with staff in a way that makes them want to do a really good job because of that personal connection, affection and respect. But employees also look for leaders who project stability and authority, who make them feel secure, and whom they believe can follow through and achieve results. A balance of both is considered most effective in a leadership role.

Related: The new Fyre Fraud? Why everyone is talking about Elizabeth Holmes

And according to Darlene Price, executive speech coach and author of wellsaid.com, nonverbal communication can carry 65 per cent to 93 per cent more impact than your actual spoken words

This is particularly important when looking at the case of Elizabeth Holmes and her now-defunct company Theranos, a tech company who promised to “democratise healthcare” by collecting data from blood droplets instead of larger vials.

Related: Do you suffer with work anxiety? Here are some tips to help

Hailed as the female Steve Jobs (right down to the black turtlenecks), and named by Forbes as the world’s youngest self-made female billionaire, her company was valued at over $9 billion with more than $400 million in venture capital.

Things started to unravel when a piece by The Wall Street Journal came out in 2015: a secret investigation of Theranos detailing that the startup was struggling with its blood-test technology. After settling with the Securities and Exchange Commission following charges for “massive fraud” back in March last year, Holmes was stripped of most of her control of the company. She and her partner were accused of raising millions of dollars by making misleading statements about, mainly, how well their blood-testing device worked amongst other things.

The how and the why

She was determined to make the company a success – that is the ‘why’ behind the scam, but the ‘how’ – as in how she almost single-handedly did this – is the most intriguing.

Most of it was simply how Holmes used body language when interacting on a one-to-one basis in a workplace setting.

Cheryl Gafner joined Theranos as a receptionist in 2006, and this was apparently one of the first things she noticed.

She was a fan of staring, never blinking and in a recent documentary, we find out that this was, according to experts, possibly a key method when it came to her deception. And there were already some strange ones; right down to the fact that her trademark deep voice was apparently ‘faked’ so that she would be taken more seriously.

“She didn’t blink,” Gafner said in The Inventor, HBO’s documentary about Holmes and the Theranos scandal.

“The way she trained her big blue eyes on you without blinking made you feel like the centre of the world,” John Carreyrou wrote in Bad Blood, his book about the downfall of Theranos based on his investigative reporting on the subject at the Wall Street Journal. “It was almost hypnotic.”

Related: This NYC socialite’s scamming tale will be coming to Netflix

Traditionally, eye contact is used to establish trust, likeability and confidence, but experts, such as Carreyrou examining the Holmes case think she used this as a tool to try and divert any suspicion – by honing in on the person in question and making them feel like the most important person there, helping sway them to her line of thinking and imparting trust onto another person. She appeared self-assured and thus, was able to command a room, say of important investors.

“She has a sort of ethereal quality – she is like a member of a monastic order.”

According to the documentary, Holmes would train her eyes down the barrel of a news camera or into the face of prospective investors and board members, staring at them unblinkingly. This ability to avoid blinking became part of her allure and, ultimately, part of her deception.

The link to deception

One 2013 study published in Frontiers in Psychology conducted several experiments where they had people do a fake crime and then talk about it afterwards. The researchers found that when the people were lying, they showed “suppression of blinking,” including blinking less often and having faster blinks than when they weren’t lying.

Another 2008 study published in the Journal of Nonverbal Behavior analysed the blink patterns of people who lied and those who told the truth. Researchers discovered that liars blinked less during their lies, and sped up their blinks afterwards. 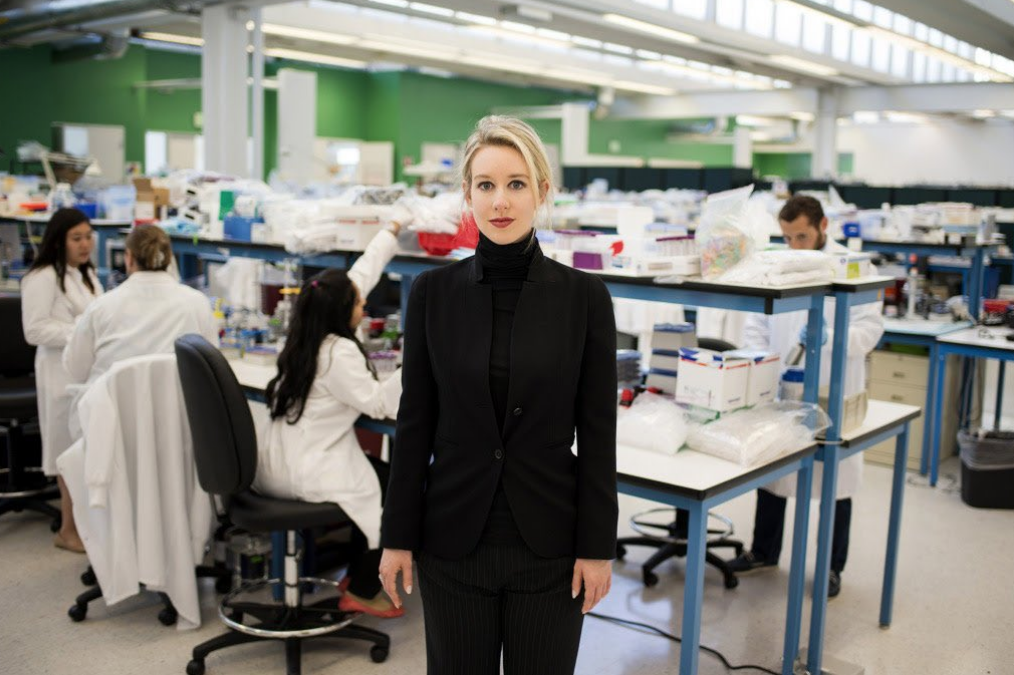 Researchers aren’t sure exactly why this happened though they think it may have something to do with the fact that they’re concentrating so much on the lie that it alters the natural patterns that they might have when they’re relaxed and telling the truth.

Dr Jack Brown, a body language expert, took an in-depth look at an interview that Holmes did in which she kept her eyes wide open for long periods of time, and found that this body language had a “very high correlation” with “deception” and “antisocial personality disorder” or sociopathic behaviour.

Of course, this characteristic doesn’t immediately prove that someone is lying, but it is an intriguing thread to the Holmes case.

Yes, she may have consciously done it, or it could just be her normal pattern of expression – the whole scenario, much like the entire scandal that she created is just very, very strange.