Saoirse Ronan on playing Queen Mary, sisterhood on screen and The Spice Girls

Saoirse Ronan believes that all many people know of Mary, Queen of Scots is her end. “I think most people know she got her head chopped off, and that’s all anyone knew about her,” Ronan says, to laughs from a packed screening of her latest film Mary Queen of Scots in the Stella Theatre in Dublin. This doesn’t sit well with the young actress who thinks that she has been misconstrued in history. “I think she was painted as this Femme Fatale; someone who was in way over her head, made really poor decisions and didn’t actually care about running a country – which isn’t true.”

It’s natural that Ronan would be protective of the queen she signed on to play when she was just 16, but she was determined to change that perception throughout the course of the movie. She succeeds. Ronan’s Mary is utterly convincing; strong-willed, emphatic and all too aware that men seek to destroy her reign of power. Oh, and did we mention all this is done with a perfect Scottish accent? Something even Doctor Who’s David Tennant praised her for on set. “He [David] came up to me after a take and said, ‘Very good accent, by the way’ and I thought ‘Yes, the Doctor likes my accent!'”

She became queen at just 18, and Ronan explains that few had any faith in her capabilities; her downfall expected right from the start. Queen Mary is a woman of history, who Ronan agrees, still feels very relevant. “For me, one of the most feminist statements about this is that you’re watching a woman come into power who is expected to have everything that her male counterparts would; she wants to be able to rule and have that sort of power while also having a lover and getting married and not have her crown taken away as soon as she has a kid.” A situation, even in modern times that all women know of too well.

It was the first time I really got to play a woman on screen and it was something I was so desperate to do.

At just 24, Ronan is wise beyond her years but, at least in terms of her work, is determined to grow up quicker. “I wasn’t going to be playing a girl, but someone who moves into womanhood as we’re watching the film. It was the first time I really got to play a woman on screen and it was something I was so desperate to do. Someone who gets married twice and is pregnant and gives birth – it was incredible.”

And just like Ronan, Mary was ahead of her time in many respects. “One of the things I loved about the real-life Mary was that she used to cross-dress. Herself and her ladies would dress up as boys and go out into Edinburgh and no one would know it was them. It was important to Josie (Rourke, the director) and Beau (Willimon, the screenwriter) that we show that side of her, that she was young and fun and mischevious.”

Ronan praises her co-star Margot Robbie, whose performance as Queen Elizabeth I is also a standout. Some historical liberties are taken for the purpose of the film. In real life, the two queens never met, only corresponded, but they do meet in the film, in a scene that is loaded with emotion. This was the only time the two actresses were together on set, for Margot’s last day and Ronan’s first day of filming. “I didn’t know what she looked like and when I saw her in the full make-up, it was shocking.” Ronan revealed that the reaction the audience sees is genuine. “They used the first take I think – the take of me as I pulled back the curtain is me seeing her for the first time.” 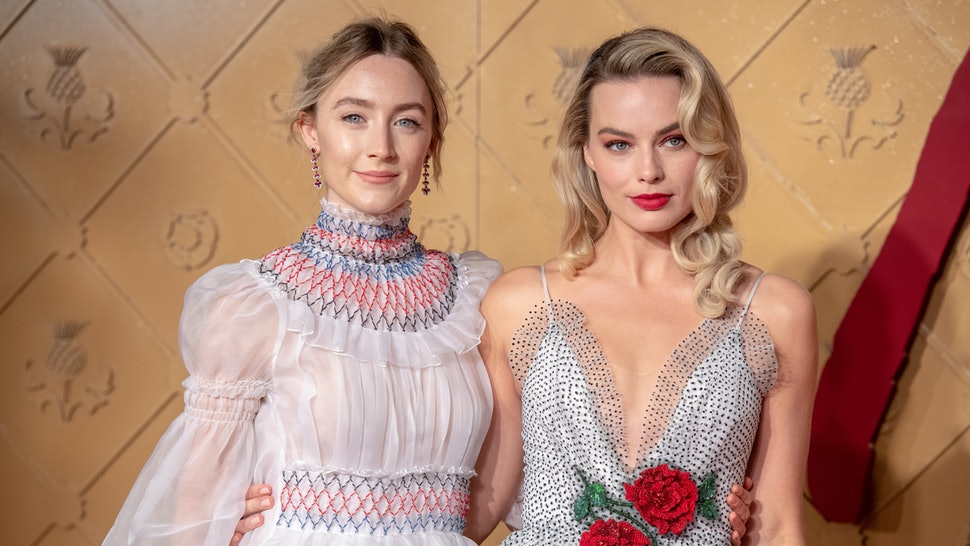 The few women who are on screen are extremely dominant against the legions of men that revolve around them. Their sense of sisterhood is paramount and Ronan says that Josie ensured the girls had a huge amount of rehearsal time to build those bonds – something that they all kept up, after the film. “We were so close by the time filming started and I think that shows in the film. Certainly, for me, the most important relationships were those that Mary had with her four ladies as she gets so much out of them being there. ” She reveals they had a special choreographer help them with their sense of movement and that rehearsal music wasn’t what was expected but was suitably empowering.

“We spent a lot of time on set dancing to the Spice Girls. I think we saw ourselves as the Renaissance Spice Girls – I was Ginger Spice!”

“I feel the perception of Ireland is different now”

Ronan is keen to play more Irish people on screen, not least because she feels the country has gone through such a prominent amount of change over the last four years. “Bernadette Devlin would be amazing to play. Or Countess Markievicz. I’d also really just like to play, fictional or not, someone Irish from present day. I think that we’ve moved mountains in the last four years. It feels different here now. I feel the perception of Ireland is different now; people are interested in us in a different way. I think we’re considered, as we should be, this very modern, forward-thinking country and there needs to be more films that represent that.”