Queen of colour Taryn De Vere talks activism, setting up a business and why humour is the best communicator

Activist, artist and possibly the most colourful woman in Ireland, Taryn De Vere has just launched her own jewellery line – which means all of us can get her vibrant look

“Are you telling me that you cut off chunks of your sister’s hair while she was sleeping?”

“Can’t you just… wait ’til I’ve gotten off the toilet?”

Phrases we’ve all uttered at some point to the littlest in our lives and wondered if anyone else has a home life this mental. Now, we can shout our collective madness from the rooftops with one working mum’s new jewellery collection.

You may recognise Taryn De Vere’s distinctive look from all over social media. She is the self-described ‘most colourful woman in Ireland’, with her extravagant headpieces (and their eye-catching messages) attracting attention all over the country. Now, you can hear her voice too, as she launches her own homemade jewellery with names just as colourful as she is.

And De Vere is certainly not afraid of being vocal — she often uses her ‘wearable art’ as she calls it to speak on some of the most divisive issues of the moment. She first came to attention during the Repeal movement, and since then has created headpieces on Brexit, the housing crisis, Trump’s visit to Ireland and many more.

Here, De Vere chats to IMAGE about building up the bravery to display her wearable art, bringing humour into her work every day, and how she became her own version of a modern businesswoman.

You came to Ireland in the 1990s from Australia, and have now become so immersed in the social and cultural issues of the country — what brought you to become so involved in activism?

I’ve always been an activist and I come from a very politically active family, who are also very creative and artistic. I remember my aunt making protest t-shirts and flags when I was a small child. So the idea of being creative for a cause is very much a part of my family history.

For me living in Ireland, the political side of things came out during water charges. I became involved in the protests and was regularly going to meetings, where it would be (mostly) men in dark suits giving dull speeches, and everything was very drab.

“If you have a cause that you want to fight for, focus on creating something colourful, and people will come and look”

I thought that it needed some colour and to be visually interesting, so I started making wearable art pieces for the cause and wearing them to the protests.

I then found that I was becoming the attraction for photographers, and it made sense – the press is looking for something visual, so if you have a cause that you want to fight for, focus on creating something colourful, and people will come and look.

Things began to pick up even more during the Repeal movement. I live in Donegal, which was obviously quite an anti-choice area, and during the vote, the Yes posters were getting taken down within 24 hours of being displayed. I just didn’t think this was right, and so I started creating headpieces in favour of Yes, that I wore every day around Donegal up until the vote. 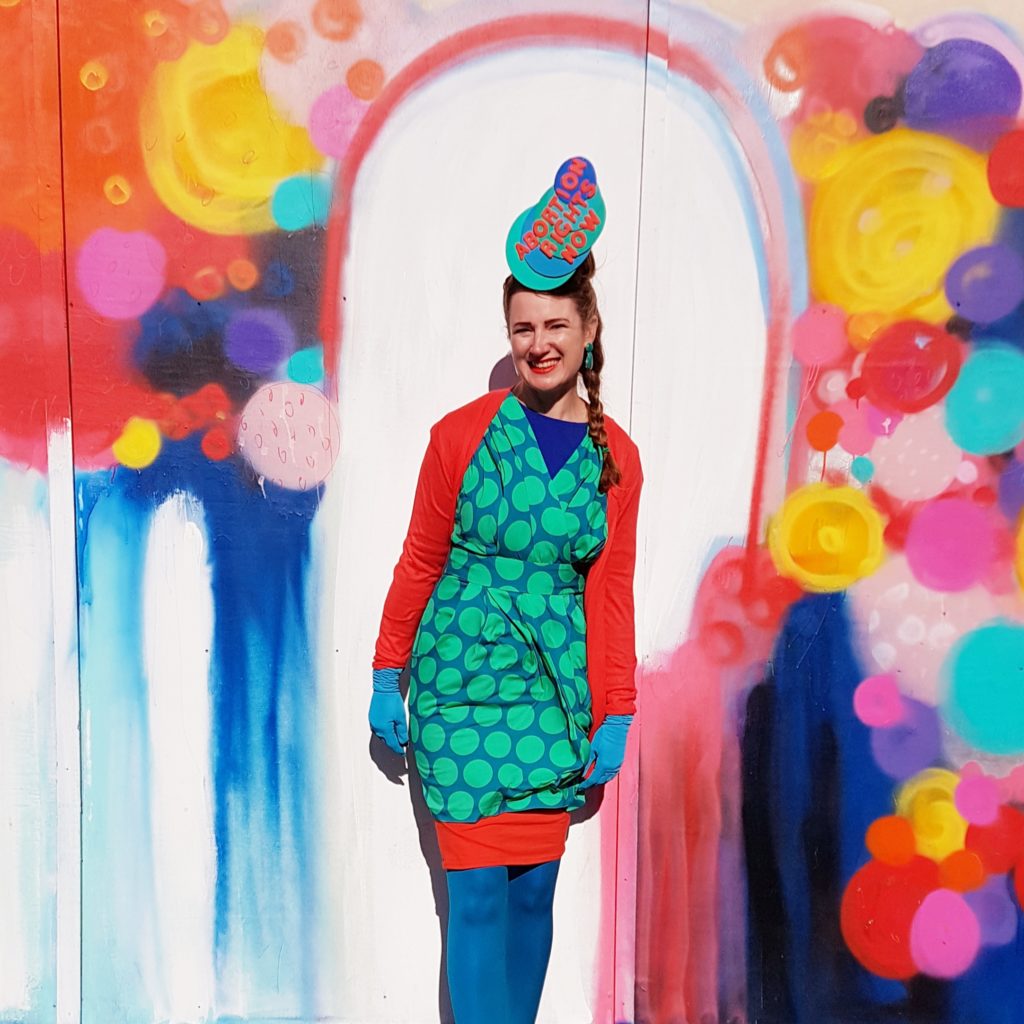 What were the reactions to that?

I got a lot of bad reactions. With any headpieces, particularly political ones, you have to build up your bravery and emotional resilience before wearing it out — people will say horrible things to you or give dirty looks. A couple of times, I was scared of being physically in danger too. It was risky and can be quite frightening, so I have to emotionally prepare to wear those things.

It’s amazing that it hasn’t deterred you and that you’ve continued to display them regardless. You’ve described yourself as a fashion activist — why is fashion your medium of choice?

I think fashion has a really powerful ability to change the way we feel about ourselves, and the way other people feel about us too. I think there’s something very interesting and fun in a person, a woman, in particular, wearing bright, colourful clothing; looking powerful and wearing a strong statement on her head. It’s something very different and inspiring.

I try and challenge those preconceptions that people might have about somebody who’s very well dressed but still politically involved. For example, some of the clothes I have will be quite conservative — I have a lovely woollen suit from the 1960s that I love to wear, but you wouldn’t really expect someone wearing that to also be wearing a headpiece proclaiming her stance on Brexit.

I like to mix it up and go against people’s stereotypes and I think fashion is a very powerful artistic medium to do that.

You often mix humour and art — tell us a bit about why you do that.

I think humour is a very human thing and it’s a way to find commonality with people. Someone who isn’t necessarily aligned with your political views might still get a bit of a laugh out of your funny political headpiece.

Humour is great space to reach across to people that wouldn’t necessarily respond to a more stark message. But the challenge there is that [some] subjects are very difficult to be humourous about.

Generally speaking, with all my pieces across the board, I try to be positive — funny if I can be – but mainly giving out positive messages rather than negative ones.

There are obviously some exceptions to this. During the Repeal campaign, I actually felt as if the stark messages were missing from the conversation, so I made a headpiece that said: “Women have died because of the 8th Amendment”. I felt the media had let us down by not repeatedly letting people know this, so I felt it necessary to put that message on a headpiece for the world to see.

I will say though, because of the emotional toll that narratives like that have, I find it much more difficult and draining to wear a piece like that too. It’s a balance.

You mentioned the negative encounters you sometimes have wearing your pieces, and social media opens you up to so much more of that. Yet you are open about everything on your social media – from parenting, and specifically your experience of parenting a trans child, to feminism to social issues. Have you had many people reach out to you in a positive way?

Definitely. I’ve had a lot of people be really appreciative of the fact that I am quite open about difficult subjects and share so much. I would say it’s overwhelmingly positive online.

Your new business has gone from strength to strength in the few short weeks that it’s been open. Can you tell us what it was like to set up?

It was incredible! It’s been amazing to experience the level of support I’ve gotten from Ireland, and from so many customers already.

When I was making stock during the summer, my son at the time was 13 and was helping me a lot with the preparation. He kept saying every few days, “Mum, I don’t know if this business is such a good idea, nobody I know in Donegal is going to wear earrings like these”, but I just laughed because I said, “my audience isn’t in Donegal”.

I expected to get buyers from all over the place — that’s why it was so important for me to have an online shop. So it was very touching to find that the majority of my customers were from Ireland, and have been so supportive – sharing posts, sharing their buys, just being wonderful.

How does it feel now running your business and seeing the brilliant reaction to your pieces?

It’s really exciting, and it feels very fun. For a long time, I think I rejected the idea of starting an online shop because I thought that I couldn’t be a businesswoman because of the kind of person that I am.

I knew from the start that I was going to put as much of my personality and values as possible into the shop and that’s how I came to the ‘Things I’ve Said to my Kids’ collection – because I’ve been collecting hilarious memories about them for years.

When I started, I was trying to learn about SEO and getting my products on Google, and all that admin, business stuff — whereas now, I just want it to be fun, and be true to me. Because I think if it’s fun for me it’ll be fun for them too.

I’ve had to get over myself a bit and realise that I can be any kind of businesswoman I want — I can be silly and I can be fun and I can have a good time. I’ve been exploring the boundaries of what a businesswoman can be.

Read more: The death of Dublin: what can we do to save it?