The psychology of twindom has been studied for centuries. There is no doubt that twins turn heads, but Amanda Cassidy explores the conflict that can often arise from being the same… but different.

“Nobody gets my jokes except my sister. Even my husband doesn’t really get my humour sometimes, but I crack up my twin sister every time!“ Dr Joan Friedman is an identical twin, she also has five children including fraternal twin boys.

It has given her the unique perspective of understanding some of the challenges that come with identity when you are born as part of a set. Parenting her sons has also opened her eyes to the differences in raising twins and has ultimately led her to specialise her psychological training to become one of the most prominent ‘twin experts’ in the world. We spoke to her from her home in Los Angeles.

“People feel like if you have a twin you will be loved unconditionally, non verbally and have a soulmate for life. They are obsessed with the fantasy that you are not alone in the world and will never have to experience abandonment. They don’t like hearing that there are often challenges when it comes to trying to assert your separate identity. I call it the twin mystique – those who are not a twin believe it is the greatest thing in the world.

The most common misconception I hear is that all twins have some kind of telepathic connection. I can’t speak for all twins, but I do know that my sister Jane and I grew up very close and of course, after 18 years of being together 24/7 we had a lot of similarities that could be confused with ESP.”

Related: Why youngest siblings think they are funniest

Joan says her parents raised her and her sister almost like a couple. They shared a room, wore the same clothes and attended the same schools. She believes that to successfully overcome any identity crisis, twins should be given the space to be separate in order to understand their own identity and find out who they are as an individual – especially as they approach adolescence.

“The constant comparison and contrast can be overwhelming. There is often a very tight connection with your twin and that can mean there is no room for another person, a friend or a boyfriend. Twins can often feel a very deep commitment to each other and the fear of betraying that loyalty can affect other relationships. It is not easy to be constantly referenced against another person. Labels like ‘the pretty one’ or the ‘sporty twin’ can also be quite damaging.” 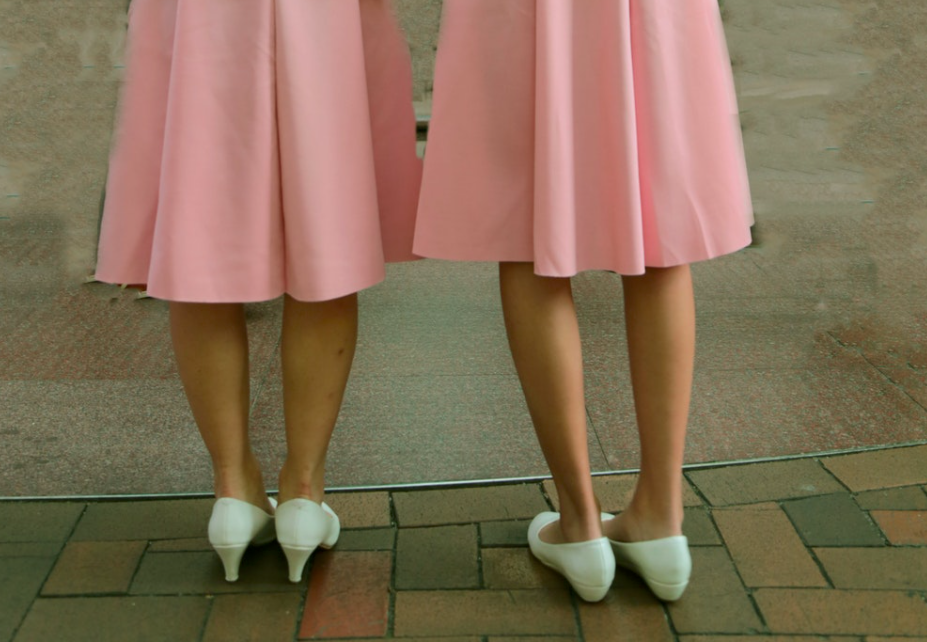 The fascination with twins has always given scientists the perfect opportunity to explore the nature versus nurture debate and whether twins who are, for example, raised apart are like-minded because of their DNA or not? Research is still fuzzy in this area, but overall similarities between twins reveal something about the likeness of twins’ minds, not simply a link between them. It also opens up questions about the influence of genes on personality and the role that environment plays after birth. Entire departments at universities are devoted to the study of twins – notably Kings College London in the UK.

Life as a twin was also the subject of a book by Caroline Paul. Almost Her: The Strange Dilemma of Being Nearly Famous charts her journey through twindom as seen through the unique perspective of having a famous twin – her sister, Alexandra Paul played Stephanie Holden in Baywatch for five seasons. Caroline, a journalist, writes about the muddling of identities and the struggle to assert individuality.

“Our twinning experience was strange right from the beginning. When my mother’s doctor heard one strong, steady heartbeat through his stethoscope back in 1963, he surmised she was cooking a vigorous, healthy baby, and not two girls whose hearts were in sync (ultrasounds were not yet in widespread use).

“The world compared us constantly”.

Even when my mother went into labour six weeks early, no one suspected. It was not until Alexandra was in his hands that the doctor cried, “Hold on, Mrs. Paul, there’s another one coming!” and two minutes later I glissaded onto the table, already not wanting to be left behind. We were labelled Baby A and Baby B and rushed to separate incubators. We had inadvertently posed as one person for nine months, and it would be days until my parents would recover enough from the shock to name us.”

She says that she found it difficult to distinguish their common bond from her own individual identity.

“The world compared us constantly. It was easy – we had a measuring stick right next to us. Who was prettier, stronger, smarter, nicer, funnier? Naturally, I wanted to be  – but not at the expense of my twin. Could I just be pretty, strong, smart, nice funny? No. Unbidden, the first thing people did was enumerate our differences. We were seen in reference to each other and never on our own terms.”

Perhaps our obsession with twins is less about the physical sameness but more a philosophical fascination. The idea that separate and collective identities can coexist goes against our expectations that we are unique and nobody in the world could be just like us. That’s what Dr Joan Friedman refers to as the twin mystique. She says learning to become an individual when you are a pair is more difficult, but it is a bond that she has seen grow stronger over time.

“We have so many shared memories. Now that we are older and wiser, I am enjoying my relationship with my twin even more. We can enjoy our similarities and companionships – we have very different parenting styles, partners, lifestyle choices. Because we were able to separate, carve out our own identities and then reunite as more secure individuals, I think we both enjoy our twinship even more over recent years.

The best part of being a twin is that you know someone so well and they know you as well as you know yourself….and that is pretty special.”

Dr Joan Friedman is the author of Emotionally Healthy Twins, a guide for parents of twins and her third book, Twins in Session – for mental health professionals was released last year.

Related: What it is like going into business with your sister