#StandWithNursesAndMidwives: We visited the picket line and here is what we learnt

“You can’t scare me I’m sticking with the union” is the musical chant that hits my ear on a Wednesday as I am making my way from the Luas to St James hospital. Fortunately, it isn’t for health reasons. Unfortunately, it is for another sort of injustice.

Today, nearly 40,000 nurses and midwives went to the picket lines for a 24-hour strike which began at 8 am this morning and will end at 8 am tomorrow morning. Members of the Irish Nurses and Midwives Organisation (INMO) are protesting against low pay and a failure to recruit and retain staff, which has created a critical level of staff shortages.

The freezing breath of the Dublin air was no match for those who stood on the picket line today. But, isn’t this something we already know? Nurses are built of something special.

As I step into the bitter Dublin air, I’m met with a circle who are playing guitar and singing. The atmosphere is joyous and it’s palpable. For a split second, I am carried away with it and forget where I am. But then the realization hits, and I feel it. Underneath the song is nerves of steel, determination, anger, and frustration at a system that feels like it doesn’t care.

The freezing breath of the Dublin air was no match for those who stood on the picket line today. But, isn’t this something we already know? Nurses are built of something special. It’s a quiet toughness. Their profession has been described many times as a vocation and it is nothing less than that. They’ve seen and dealt with worse and the cold is only a minor blip; not once did they flinch.

Across the country, picket lines were drawn. Tensions hit boiling point and the very end of the tether was reached. Was it expected? I spoke with Jo Tully, a nurse and IMNO rep who qualified in the late 1970s and has been a staunch union member her entire career. 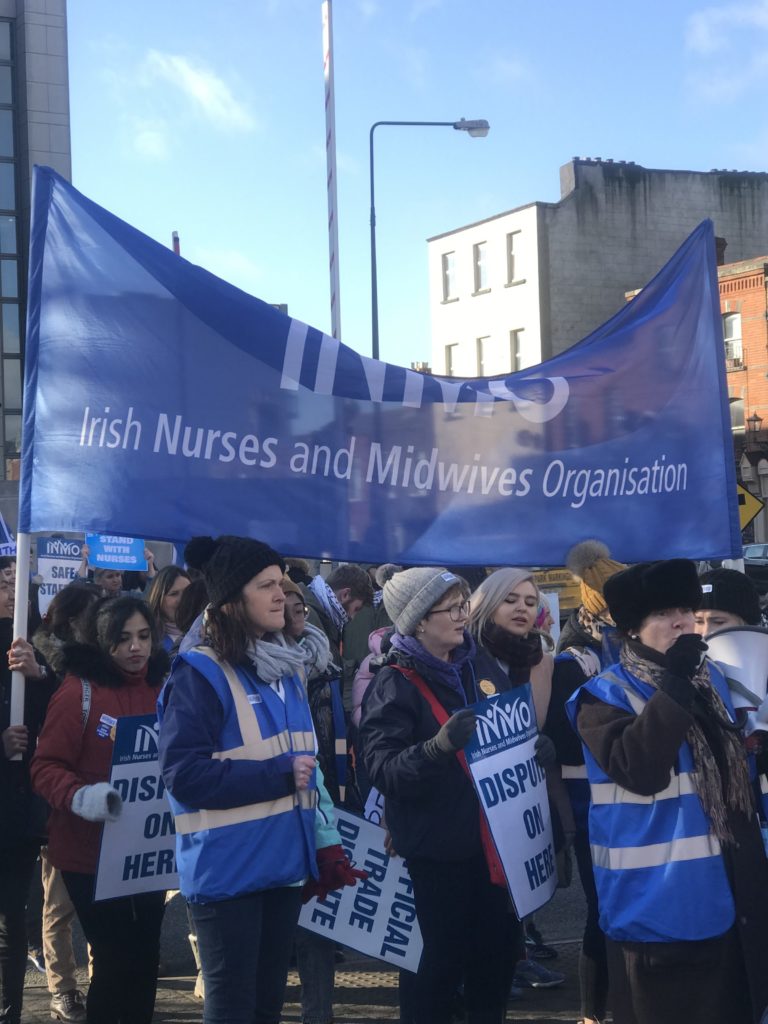 She told me that she knew it would come to this and that a strike, though unwanted, was inevitable saying “This strike is a long time coming. There is huge bitterness at this stage because people are worked in impossible conditions with staffing levels that are well below half what they should be.”

Speaking to nurses and midwives who took a stand today, the overwhelming feeling was one of abandonment.

She continued: “We have seen ten years of austerity with pay cuts, lengthening hours and overtime bans. And the conditions on the wards are often invisible. I knew it was going to happen. For me, the question was if the leadership was going to take it where it needs to, and they did.”

Understaffing is a virus weaving its way through Irish hospitals and Jo stressed that if this strike isn’t won, that will only get worse. “Out of every four vacancies, we have one applicant. In St James where I work, we have 11 theatres.

We operate a huge count of surgeries, three of those theatres have been closed for the last year because we cannot get nurses and this is with rocketing waiting lists. It is a crime. The government have to decide if they want a health service and if they don’t listen to us now, there won’t be a health service.”

Speaking to nurses and midwives who took a stand today, the overwhelming feeling was one of abandonment. The government had forgotten about them. The tentative carers who have ultimately become the heaviest of pressure bearers.

Today at St James I couldn’t help but be overcome with emotion.

One nurse told me that pay, even though a vital component of this strike, wasn’t even a personal determining factor. She just wanted them to understand and recognize the conditions that they are working in like the extra hours of overtime which keep them from home and go unanswered. Another told me how she had emigrated, but after a year decided to return home. However, she is tempted to leave once again by emails which seduce and promise her a better life.

Today at St James I couldn’t help but be overcome with emotion. There was a distinct atmosphere of unanimous support from every corner of life. From bus drivers to Luas drivers, to ambulance drivers and to normal Dublin commuters who beeped in recognition.

From the community centers in areas such as Drimnagh and Fatima who made sandwiches, to those working in the hospital; the doctors, the administrators and the caterers who brought doughnuts and tea.

The support that the nurses and midwives got today from passing cars at St James was amazing. From Dublin Bus to the Luas to random cars there was a real feel of unanimous support. #nursestrike #istandwithnursesandmidwives pic.twitter.com/uQNMovU0Mz

These gestures were solidarity in motion. Hearts are sore. Selflessly and compassionately nurses care for us, but we can’t seem to care for them. Collectively, we have all encountered a nurse or midwife at some point in our lives. We know of a mother or father who missed Christmas Day with their children to tend to the sick. Those who had forsaken birthdays and anniversaries, and those who left on a plane, leaving the home which made them in search of something more.

Jo Tully believes “that if the position isn’t changed and if the nurses don’t get what they need, the situation is not only going to get worse but I think we are in a terminal crisis in the health service”. With more strikes scheduled for the coming weeks, it is now in the hands of the government.

Today was a fight. One that has passed its twelfth round. Choice is something that each and every one of us is blessed with but, these women and men are left with none. Compassion and kindness are what defines them, but only crude indifference is what they experience from those who determine their faith.

Today I stood with nurses and I will continue to do so. You can’t scare us. And just like those men and women who stood in the harsh January air; we’re sticking.