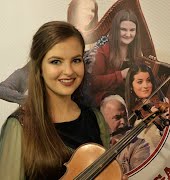 People are boycotting Kat Von D over her plans to have a ‘vegan child, without vaccinations’

Beauty fans have said that they will not be purchasing any more of Kat Von D cosmetics, after its founder, who’s pregnant, announced via Instagram that she would not be vaccinating her baby and raising it as a vegan.

Make-up mogul and tattoo artist Kat Von D wrote about her “personal approach to pregnancy” on Instagram five days ago, with a photo of her bump.

In the post, she wrote about the backlash she regularly receives for her opinions, including for being “an openly pregnant vegan”. She also wrote about her plans to have a “natural, drug-free home birth in water” and to raise her child as a vegan, without vaccinations.

Kat Von D, undoubtedly expecting a backlash, said that she “already know[s] what it’s like to make life choices that are not the same as the majority” and explicitly called for followers who disagreed with her views to “keep[ing] your unsolicited criticism to yourself”. However, the post was met with an enormous reaction on social media, with many voicing their plans to boycott the Kat Von D cosmetics line in response. 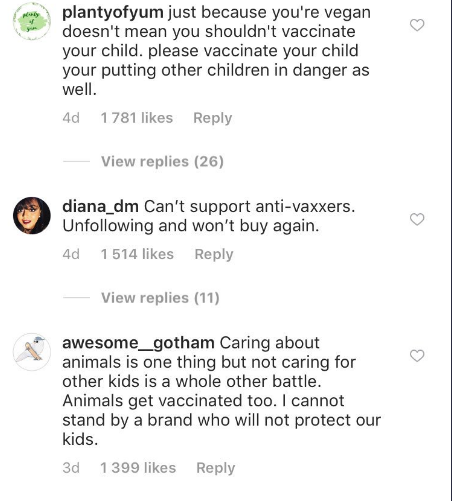 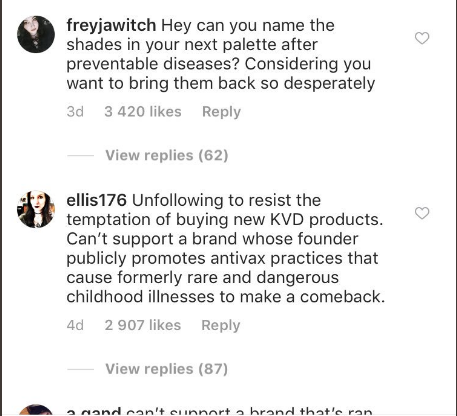 Fans expressed their disappoint in Von D and the brand, and many said that they would be unfollowing the account and getting rid of their products from their collections.

Kat Von D beauty has always marketed itself as being an ethical beauty choice, as they are vegan and cruelty-free. However, many fans now seem to have changed their minds on the brand.

The rise of vaccine-preventable diseases has been discussed in the news in recent years, and even Ireland has seen the effects. As reported by the Irish Times, national uptake for the Tdap (tetanus, low-dose diphtheria and acellular pertussis) and MenC (meningococcal group C) vaccines for teens fell by 3% in 2017. One of the country’s most prolific cases with regards to anti-vaccination is the HPV vaccine, whose rates of uptake in girls aged 12-13 are just beginning to rise again after falling 37% in 2016.

What to make tonight: a 15-minute vegan korma with the contents of your kitchen cupboard