Her landmark case against the State to life the ban on assisted suicide brought much public attention, but?this was only part of Marie Fleming’s remarkable life story, as her daughter, Corrinna Moore, tells Sian Smyth.

You know that someone has become part of the national conversation when news of their death trends on Twitter – the most immediate modern barometer of the nation’s pulse. Marie Fleming was such a person. When she passed away peacefully in December, Twitter was abuzz with ordinary people offering spontaneous tributes to the courage of this truly extraordinary woman. It’s barely ten weeks since Marie’s funeral, when her daughter, and my friend, Corrinna read out Marie’s last wishes, telling people not to be sad, but to live life to the full, take all your chances, and seize every opportunity.

Marie Fleming’s newly published memoir, An Act of Love, is an amazing read. Although she didn’t live to see the book in print, she approved the final edits and was thrilled to know she hadachieved her goal of becoming a published author. ?This book meant more to her than anything, certainly more than her legal battle,? says Corrinna. ?It made sense of her life and helped her see how far she had come. She had so many achievements to be proud of in such a short life. And it is her legacy, for her grandchildren.?

One of the most wonderful aspects of the book for Corrinna is that it gives a full portrayal of her mother – from a young girl who had hopes, dreams and responsibilities to an ambitious young woman who lived life, achieved, and loved. ?She was fiercely mature, and responsible beyond her years; maybe her earlier years shaped her,? says Corrinna. While much is known about her battles in the High Court, Marie’s early life is fascinating. And some of the strength she displayed, which touched a chord with so many, can be linked to her formative years.

Living in Donegal, Marie left school at the age of 14 to care for her younger siblings after her mother left. It was a lot to deal with but, as Marie says in the book, ?nobody asked?. When she was 16, Marie became pregnant. She insisted on keeping her baby, and unlike many other Irish teenagers in her situation, succeeded in persuading her father to let her. This was against the advice of the parish priest, who had made arrangements to send Marie to a ‘mother and baby? home in Belfast. She was expected to give up the baby and, although she only discovered this later, was to be sent to work in the Magdalene laundry in the adjoining building. 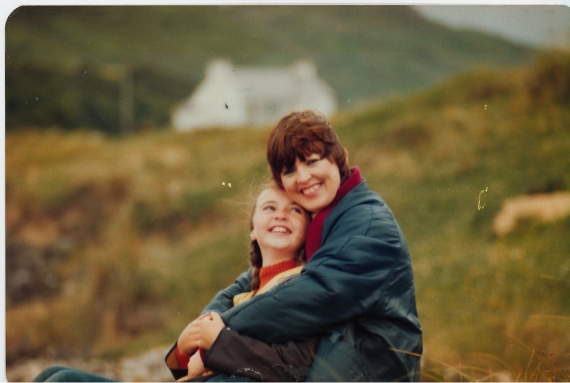 Corrinna points out that Marie never shied away from anything, good or bad. When faced with the implications of her illness, Marie wanted to take control, to have a dignified death, in her own home with her family. She didn’t want to die, but while she wasn’t terrified of death itself, what she feared most was the horrific?natural?process of it that lay instore. Ethical issues around the right to die are likely to become one of the great moral dilemmas of our generation; medicine is good at keeping us alive, but not keeping us healthy.

Marie didn’t want to be trapped in an institution, unable to swallow unaided, unable to speak, PEG fed by a tube through the stomach, knowing her brain would be the last organ to be affected. She registered with Dignitas (the Swiss clinic where people can bring about their own deaths under doctors? supervision), but was uneasy about putting Tom and the children through the ordeal. Setting aside this option, in December 2012 she took a case to the High Court to challenge the ban on assisted suicide. Despite being deprived of personal autonomy, and sometimes in unbearable pain and with distressing side effects from medication, Marie wanted to use her voice while she still had the power of speech to ask the court for assistance to have a peaceful and dignified death.

In court, Marie and her lawyers argued that the ban discriminated against her as a disabled person. In the High Court and in the Supreme Court, she was already in the final stages of her Corrinna is grateful for the fact that Marie had her voice until the end. She was able to communicate, and Corrinna can’t bear the thought of her mother being unable to speak, surviving in a trapped body for months or years.disease, with no use of her limbs, difficulty swallowing, and choking episodes. This exhausted her and frightened those around her.

She didn’t set out to be a campaigner, but she wanted Tom to be able to assist her death without the fear of prosecution. Tom supported Marie through her legal battles, campaigning for her and others? right to die. While he was her advocate in all matters of the head, it was Corrinna who represented her mother in matters of the heart and tried to bring joy to the house with all the children, their hugs and shouts, and involving her mum in much decision-making around them. They were so close that Corrinna, in an emotional moment, explains that sometimes she didn’t know where her mother ended and she began. ?She was phenomenal, really. The ultimate parent, always sparing her children the pain. She had thought of everything. Including the type of coffin: a simple wicker casket, in which her book, her life’s work, was placed beside her.? Corrinna recalls a trip she made with her mother and Simon, when Marie urged them to take any opportunity they were offered. ?It became a case of living every day as if it were your last.? Corrinna, who says that her own faith has been tested over the years, explains that her mother’s experiences have reignited some sense of belief. Marie nearly died in 2010, when her heart stopped momentarily and Tom had to revive her. She had a distinct memory of a tunnel, a light, and her father coming to get her. She had always believed in heaven, but that kind of sealed it. Knowing she had that comfort is very reassuring for Corrinna. And her own children say to her, ?Don’t be sad, Mum. Your mummy is in heaven, and she is happy doing fun things.?

For more about Marie’s incredible life story, see the March issue of IMAGE, on newsstands now.