That’s hot: the rise and fall and rise again of Paris Hilton

“That’s hot”; chiuauas; Juicy Couture velour tracksuit sets; ginormous feet; tiaras… These are all things we associate with the multi-million dollar entity that is Paris Hilton.

Paris, as we all know, is a hotel heiress who skyrocketed to fame when she and her bestie Nicole Richie starred in their own hit reality series The Simple Life. It was here that the world first accustomed themselves to her airhead personality, her blatant lack of understanding of “real world life” and her use of the phrase “that’s hot” in the most inconsistent and random of situations.

On The Simple Life Paris was a dumb blonde, and that’s what she’s been ever since. People who find this statement harsh can refer back to the time she took part in a “Vote or Die” campaign, only to, ahem, forget to vote in the following election.

Throughout the naughties, Paris became a queen for girls who were as unapologetically privileged and as spoilt as her; girls who shared the belief that everyone should “stop being jealous”. Girls who centred their carefree lives around shopping, sunbathing and partying with their miniscule accessory-dogs. For everyone else, she was a bit of an eejit.

To this day Paris Hilton continues to represent the epitome of naff; she’s still striking the same poses, wearing the same glitzy gowns, faffing over her dogs as ferociously as ever… But in an interesting twist of fate, Paris has now become a strangely iconic relic of the past; in an era when we crave to be reminded of our younger years the girly-girl caricature that Hilton embodies serves that function perfectly.

While Paris might have put a halt to the reality TV shows, she never really left our gaze. Her image was ironically placed on T-shirts, her posters pinned up in vintage shops. The general sentiment became this: Paris Hilton is so wrong, she’s right. And now it seems that the heiress is making a serious resurface, except this time she’s trying to shake off her ditzy personality as she does it. 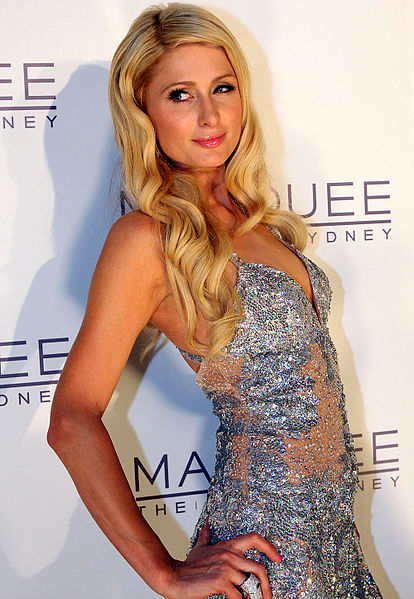 Paris is now a central figure in the latest documentary The American Meme, which looks into the lives of modern celebrities who have reached fame and fortune as a result of allowing the public into their everyday lives. Paris was undoubtedly one of the leaders in this regard (let us never forget that Kim Kardashian started out her career as Hilton’s “wardrobe organiser”).

The documentary concept is zeitgeisty in its very essence, but what makes it all the more compelling is that it presents a completely different side to Paris. In it, she is clearly hoping to shed a considerable chunk of that “dumb blonde” persona, a persona which she claims to have created, and faked, purely for entertainment purposes.

Paris says it all in one short sentence: ‘I wouldn’t get this far in life being a dumb blonde’. And you have to hand it to her, she has gotten pretty far over the last twenty years. Today she charges up to one million dollars per DJ set, $50,000 just to attend an event, and since 2004 has generated $1.5 billion in sales from her fragrances. She has even proved herself capable of summarising an entire generation’s feelings towards global warming in one tweet:

This is earth
It's hot
Don't pollute

But let’s not get too carried away here. Paris once said that women who accused then-candidate Donald Trump of sexual misconduct were merely after fame and attention. She’s also been arrested for drunk driving. Pretty dumb behaviour for someone who is “faking it”.

But even a DUA conviction couldn’t keep Paris down. Posting on her MySpace page after being released from jail Hilton said: “Happy 4th of July everyone, and remember to be responsible and have a designated driver! Just looking out for you all. I love you and have an amazing summer!”

Does Paris’s self-identifying argument seem plausible? Perhaps. It would be pretty depressing for someone so impossibly stupid be valued to such a degree that people are willing to pay extortionate fees just for her presence. As far as we can see, this girl must have some level of intelligence. And if that is the case, then it would make her a brilliant and very committed method actress, too.

Who knows – maybe if we could all deflect insults and snide comments in the same way that Paris Hilton does, and if we could all see the “hotness” in our fellow beings in the way Paris Hilton sees it, then maybe we too would find ourselves a fluffy ball of blissful happiness, too.