This month acclaimed Young Adult?novelist Deirdre Sullivan is celebrating the release of her fourth novel.?Needlework tells the story of Ces, a 17-year-old girl dealing with the aftermath of domestic violence and trying to find and heal?herself through body art. Deirdre first made her literary mark with the?’Prim’ series of novels which told the story of teenager Primrose Leary. The final entry in the trilogy, Primperfect, saw her nominated for the European Prize for Literature.

You’re originally from Galway. Do you think you’ll ever go back there to ‘settle?, or is Dublin home now?

It’s hard to know what path your life will take. Right now, Dublin feels like home, but I don’t know where I’ll eventually settle. And there’s time to decide.

A lot of people assume writers release a novel and that’s it – you’re a novelist with either a home office or a shed in the back garden where you retire to every morning to bash out the next bestseller. You work as a teacher and write in your free time. How do you find the energy to balance both careers?

This year, because I’m in college as well (part-time), I’ve only had time to write the odd short story and do the necessary edits on Needlework before publication. Non-essential writing is kind of on hold till Easter. I miss it a lot. I’d love an extra day in the week. 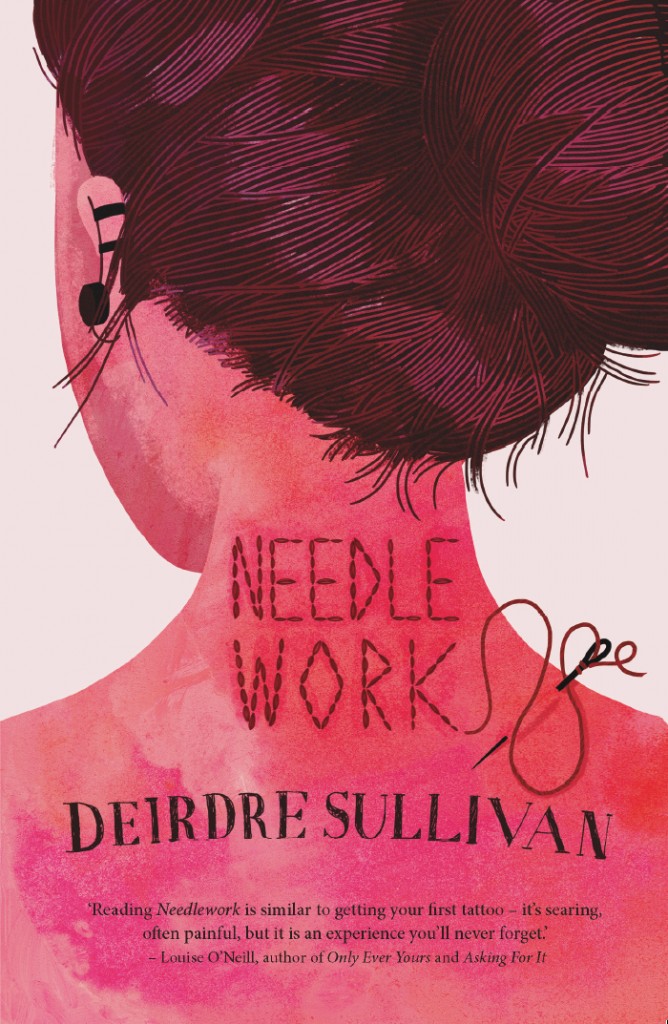 The subject matter of Needlework is quite dark. When you write about issues surrounding abuse, does your own mind go through the works and how do you look after yourself during that time?

It is quite dark. I really feel for my characters when I write them. I find the research, the stories of real people going through things are extremely heart-wrenching to read. I felt extremely close to Ces, the character of Needlework. Writing first person will do that to you, even though you’re making it up, you empathise. I don’t look after myself when I’m writing. I find it satisfying. And if I need to be sad or angry for a few weeks getting a draft down, that’s a journey I welcome. It’s more frustrating if you’re not producing anything. If you feel blocked. That’s when you need to mind and forgive yourself, in my experience.

If I need to be sad or angry for a few weeks getting a draft down, that’s a journey I welcome.

And before you write about something like that, do you prepare yourself? Do you talk to professionals or conduct a lot of research? Or do you rather just get the words and emotions down?

I read a lot, and watch documentaries before I start writing. But once the character of Ces came to me, I wrote Needlework in a month. As I edited it, I continued to educate myself about trauma, and survival. I like to read first person accounts, because, while statistics are terrifying, they’re not Ces? experience. She doesn’t care who else is in the water, she has her hands full trying not to drown.

You wrote the bones of Needlework 4/5 years ago. Why did you leave it to ferment?

I wrote it in a month, as part of NaNoWriMo (National Novel Writing Month). The first draft came very quickly, and I had to leave it for a year before I opened it again. I was convinced it was going to be word salad. And, when you’re dealing with the issue of domestic violence, and the impact of child abuse, it’s something you want to handle delicately and sensitively. I didn’t want to get it wrong, and I worried that I had. Ces was very clear in my head, but all the mythology and tattoo lore, and sky-bear worship? I was so convinced I’d gotten it wrong, and if I came back to it, the memory of a character I loved would be ruined. But one day, while on holidays in Edinburgh, I decided to just have a read of one page. And spent the next few months fixing and tweaking it. It came out much the same, but cleaner.

The Young Adult genre is booming of late. Or it seems to be. You’ve been writing in this space for some years now. What do you make of the intense media focus on it at the moment? Good, or a lot of pressure?

I don’t think of YA as a genre, more a demographic- fiction, encompassing a range of styles and genres, that’s largely marketed to young adults.

The buzz about it is a good thing, but it doesn’t really impact me. I always read YA. I always wanted to write YA. I am excited that people are noticing young adult fiction, but it has always been there, doing its thing and it’ll still be there. And books I love getting more attention in the media, which means writers I love can afford to make more stories, is always positive.

Is there a responsibility when you’re a writer writing for younger audiences? Are you ever worried you might miss the mark?

There are more ways to contact each other now than there were when I was a teen, but people are people. Their insecurities, fears and desires are going to still be around acceptance, inclusion, love, finding a place in the world. The big stuff. The world changes, but the experience of being human doesn’t hugely. I hope we’re becoming more accepting, kinder.

Do you ever encounter snobbery among literary sorts for choosing to wring YA?

Rarely, though the children’s book community is kind of it’s own beautiful, supportive island where everyone recommends books to each other and owns at least one thing shaped like an owl, or with a picture of an owl on it. I like it a lot. You do get a little facial re-jig sometimes when you say your books are for teenagers. But then you get to do a little facial re-jig back. Cycle of judgement. I hate genre snobbery. Good writing is good writing, no matter what section of the bookshop you find it in.

Good writing is good writing, no matter what section of the bookshop you find it in.

Besides you, who else should we be reading?

SO MANY PEOPLE. It is really an exciting time for young adult fiction, and for feminist voices. Claire Hennessy has a book out later this year called Nothing Tastes as Good, which deals with eating disorders in a really effective and compelling way. Holly Bourne is writing an amazing series of books about a feminist collective of teenage friends called The Spinster Club, and I gobble those up. Louise O? Neill‘s books are great, if you enjoy staying up late at night, reading one more page and feeling angry. Anything Cat Clarke writes is always heart-breaking and dark and immersive. I just finished a middle grade novel by Dave Rudden called Knights of The Borrowed Dark that is full of strong, complicated women with agency. I loved it. Sarah Maria Griffin has a novel out in the states later this year called Spare and Found Parts. I really enjoyed her memoir, Not Lost, so I’m really looking forward to that. Tender by Belinda McKeon was an amazing book, and I think it wouldn’t be out of place on the YA shelf. Kerrie O? Brien and Doireann N? Ghr?ofa are two poets whose work I really enjoy. Online, I love Roe McDermott’s writing, there’s a beautiful clarity and intelligence to her work that I really admire. And Tara O?Flynn’s columns for Headstuff always have me nodding and giggling. Sometimes it’s a rage-giggle, because we women have many complex emotions.

My favourite writers are Marian Keyes, Emma Donoghue, Angela Carter, Shirley Jackson, Dorothy Parker and the ghost stories of Edith Nesbit and Edith Wharton. I love Victorian ghost fiction written by women. It’s one of my favourite things to read.

Needlework is out now. Order it here.