Pigsy, who also goes by the name of Ciaran McCoy at the award-winning ODKM?architects, is opening up his second solo exhibition this week.
We caught up with the artist/architect to hear more…

How do you feel about heading in to your second solo exhibition?
It feels good. I suppose the last one was a really big learning curve for me, but?great fun. I really enjoyed the’six weeks. I get quite bored and restless, so I?used the gallery space to paint a canvas on the floor and I would just paint away. People would come in and see me paint and I’d have a chat with them. It’s more interactive, so it’s breaking down that hierarchy between art and public.

What should we expect to see in ?Nostalgia’s Not What It Was??
The title was actually less positive until I changed it, it was originally ‘No Space for Nostalgia’. I fixated on this notion of nostalgia holding you back from what you want to do, before realising that some nostalgia is good. If you can’t pick out the positive things from your past and what it made you,?nostalgic thoughts can prevent you from being positive in the future. ‘Nostalgia’s Not What It Was’ ?is about moving forward.? 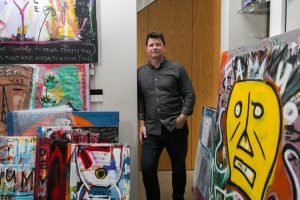 How did you come up with the alternative name of Pigsy?
It’s simple, it’s my nickname from when I was a kid. It was a character from Monkey Magic, a japanese programme about demons. One of the demons was kind of an anti-hero. My mates thought I looked like him, so they called me Pigsy. The reason why I use it in my painting, is because Ciaran McCoy is quite formal, like my architectural world. With painting, I want to be informal.

What do you do differently with your art as your alter ego, Pigsy, as opposed to architect, Ciaran McCoy?
There is no third-party influence like in architecture. With art, all you have is a blank canvas. The only real restriction is yourself and your own creative inabilities that can restrict your process. The only thing that confines you is the edges of a canvas.

What is your favourite medium to work with at the moment?
In my new stuff what I have been doing is, I pour really high gloss, like household paint, and then I sand it out, so it gets a big, lovely texture. When you spray any materials on it, it grabs it. I have a couple of friends in art who work with stencils. They give me their leftover spray cans, and tops. I don’t clean the tops, and the ones that spray wrong are the ones I want, the ones that bubble. It gives me texture and it’s more interesting. I like the imperfection of it all, there is more opportunity in it. 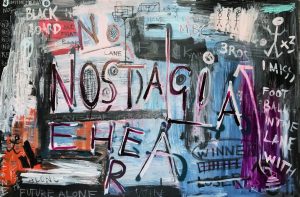 As an artist, how do you find working in this specific creative field in Ireland?
Ireland has a small art market as well as an?architectural market, so it’s a bit more difficult. I am not sure how many artists are carving out a living. They just do it for the love of it, that’s just what they are. I paint because I have to, more than I want to. The guys in Ireland are mostly really positive, people like Emma Sheridan, ADW, Noel Dempsey or Steve Kemp. I just love talking to them, they just look at life differently. It inspires me.

Steve Kemp is curating your show again, what does he represent that appeals to you as an artist?
I love Steve as a person and an artist. He’s a cool guy. We’re very similarly minded, but so different. We have a good laugh but we’re fairly honest with one another. He’s brutally honest, which I need.?

What artists appeal to you in the industry?
Jean-Michel Basquiat’does appeal to me. Funnily enough Le Corbusier’s work appeals to me usually. His work is all based on the golden ratio. If I’m struggling at the start to get an idea, I use a mathematical equation, that goes back to my architecture.?In art you hear that staring at a blank canvas is the most unfriendly thing in the world. I love blank canvases, I just see huge opportunity.?I also like the guys that are more expressive with their art, like Jackson Pollock’s kind of stuff.

What’s next as Pigsy?
Next year, I plan to do a show in London. The year after I am going to hit the states, so either New York or LA, that is the aim. This show is a stepping stone. The documentary maker Mike Andrews contacted me a while ago. He liked my story and wanted to do a piece on me, and we’re going to try and get that into a few festivals.?Either way, my plan is to keep painting. I have lots of ideas that are just stacking up in my head, that I just want to paint.

Nostalgia’s Not What It Was?runs from October 5-8 at the?Fumbally Exchange, Dublin 2.