Prior to his nomination in the 2018 Design Awards, we caught up with musician and woodworker Terry Cullen of Two Wooden Horses in his Greystones workshop, where he creates beautiful timber boards and furniture that works with the grain.

I’ve always been working with my hands – breaking horses, playing music.  I was a drummer for 12-odd years, playing in bands and working as a session drummer before I had enough and started working with my uncle, fitting out pubs and on building sites. 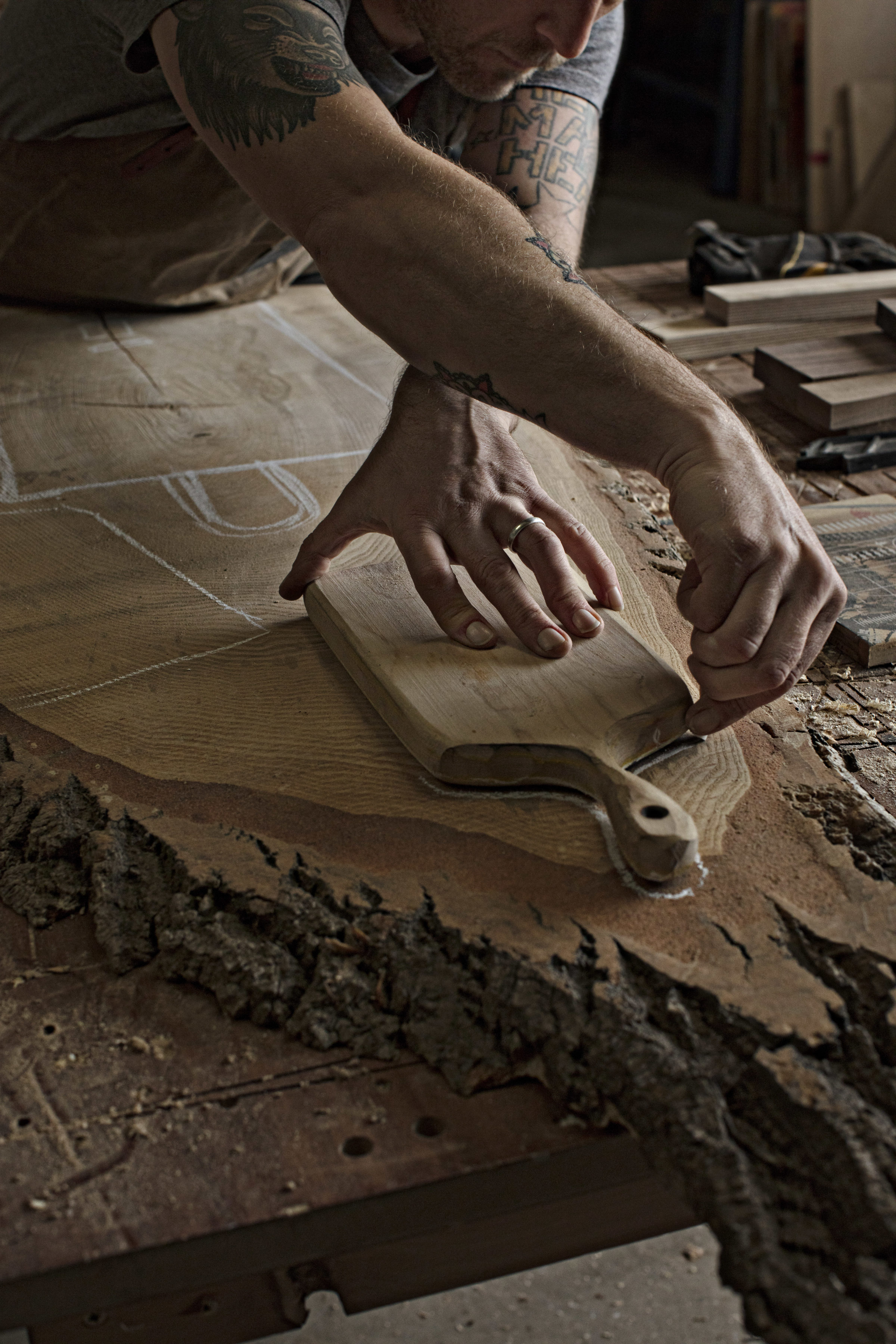 It wasn’t until I met wife [photographer Joanne Murphy] that I started making pieces, mostly because I was broke and couldn’t afford a birthday present. The first thing I made for Jo was a reclaimed wooden table, but I didn’t measure it so when I shut the jeep boot on it, it cracked the front windscreen. I drove up from Waterford with the table and a smashed screen, but she loved it. Then, she needed boards for her food shoots so I started making boards and it progressed from there.

A lot of people don’t like the rugged part of the timber, the barky bits and cracked areas, but I love the figurative stuff. I also love old pitch pine, from old farmhouses or churches, I’ll travel the country for that. And then I have a friend, Neil Willis, who runs a sawmill in Kilruddery and he’ll call to say all that stuff I like is in and I’ll go and load up. I won’t really know what I’m going to do with it at the time, I still have stacks of pieces that I really like but just haven’t figured out where it works yet. 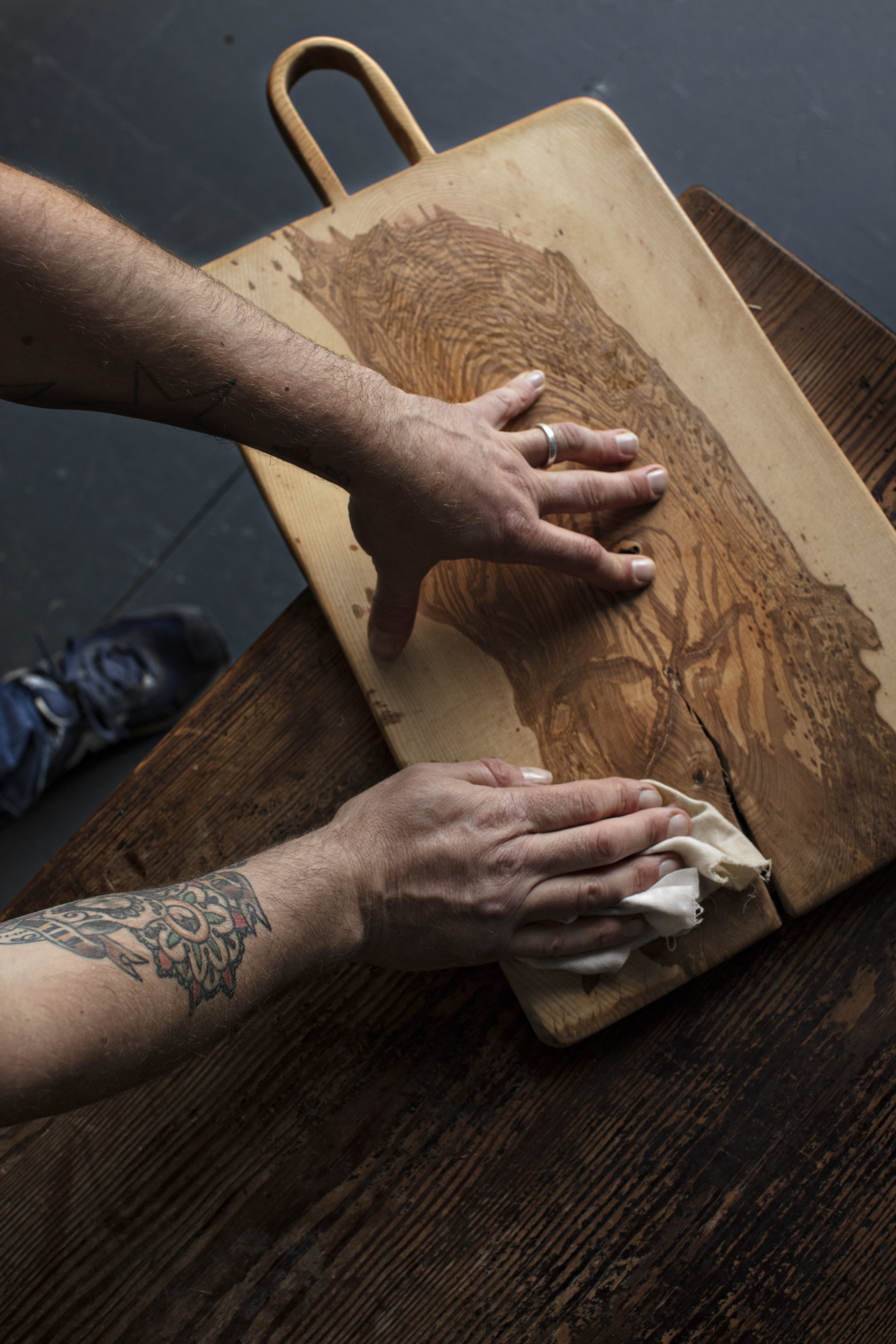 Music is still an important part of my work and I’m heavily influenced by record sleeves. If you look at an album sleeve, you know how it’s going to sound, and that’s what I want, for my work to be distinctive. That’s why I like the letter stamps, they’re always imperfect and tactile, and they wear away with the wood grain. Sometimes I stamp lyrics I’m listening to into a board, just because I like it. Not everyone will buy a chopping board with Black Sabbath or The Smiths lyrics on it, but then they eventually find a good home.

I love the colours in a piece of wood, the contrast of the heartwood with the sapwood. Because of that, I started making my own food-safe waxes from local beeswax, mineral oil and essential oils. The other chemical stuff tends to harden the timber and can affect the colour quite a bit. 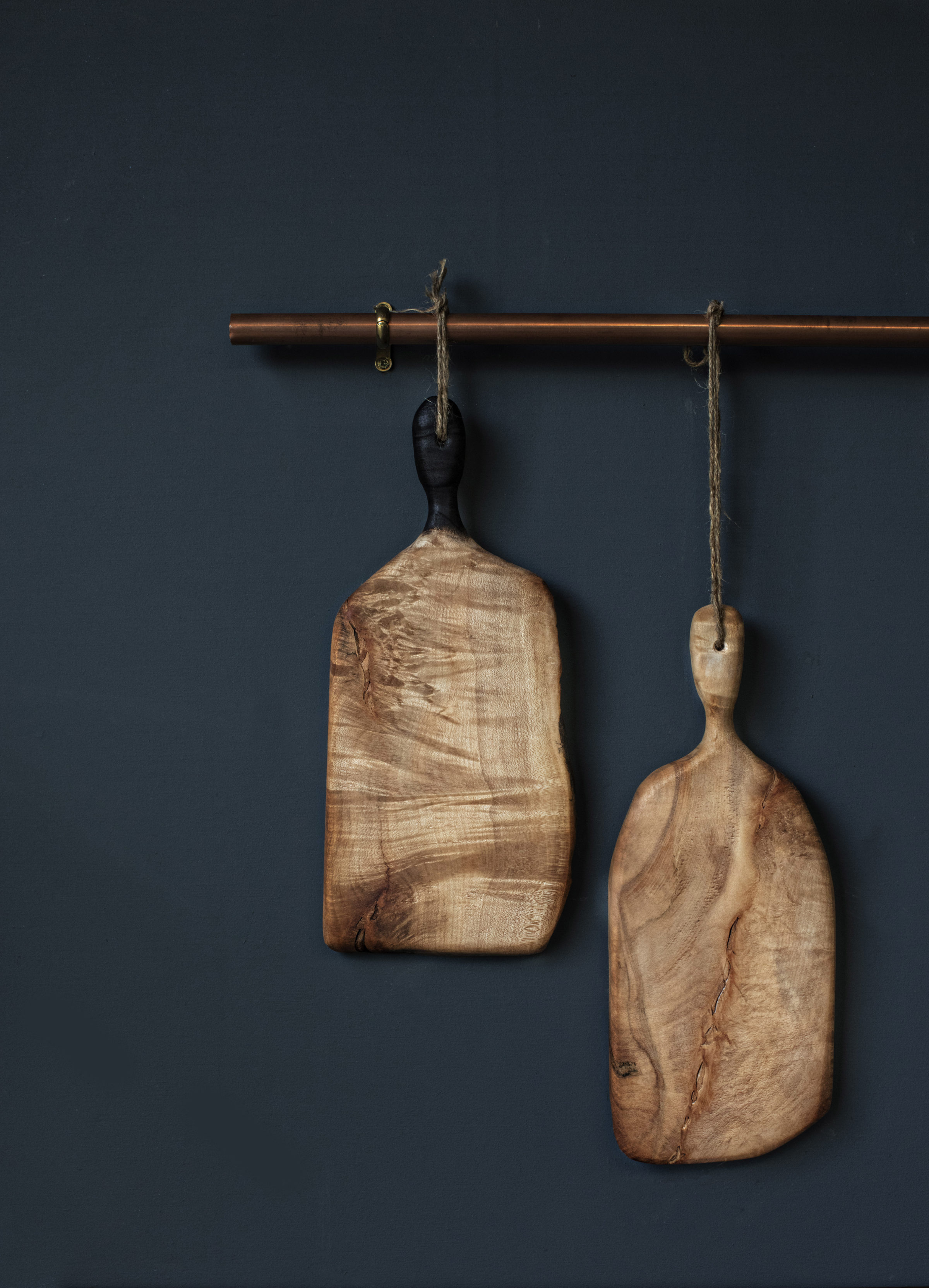 I’ve been making some furniture too, and again it started out of necessity for the house. I made stools out of two gnarly tree stumps that the kids always enjoyed sitting on, and a chestnut and holly bench. I had this beautiful piece of holly with a live edge for ages before I finally found the right spot for it. I like to work that way, so hopefully, no one will ask me for 80 of the same thing because there’s no way I could do that!

I’m currently working on a wood screen-printing project with a friend, graphic designer and illustrator Gavin Beattie of Tiny Little Horse. We actually know each other from way back when he was doing gig posters and then we met up again and began joking around that we’d work together and call it “One Horse Town” or something. We have the same taste in music and would sit around listening to Fugazi and coming up with these hare-brained ideas that are now coming to fruition, like a birch lamp with a screen-printed plywood shade. He’s such a talented designer and it’s great to have someone to collaborate with, so much of what I do is on my own. I’m looking forward to getting stuck into that for 2018.