Matt Damon is Jason Bourne And Hot In New Trailer

There must have been something in the water of those?Ocean‘s movies.

Ben Affleck, George Clooney, Andy Garcia, even Scott Caan have aged magnificently. That movie was made FIFTEEN YEARS ago and they all still look Grecian gods. Except for Brad Pitt, he has made some very poor hairstyle choices in recent years. Sorry Brad-lovers.

But none appear to have aged better than Matt Damon. Yes, you read that right, Matt Damon.?Amy Poehler might have said he looks like “a garbage person” compared to the other guests at the 2014 Golden Globes, but she clearly hadn’t seen the new?Jason Bourne?trailer.

Forget Henry Cavill?(okay don’t forget him, just put him to one side for later), Damon is in the shape of his life for the new flick, plus, the whole salt n’ pepper thing is totally working for us.

In’this first look we see Damon as Jason Bourne for the first time since the trilogy supposedly ended in 2007 when he went underground after exposing the people responsible for his amnesia and subsequent transformation into a CIA assassin. Now, he has decided to resurface but not before he gets involved in some excellent?Fight Club-esque’shirtless bare-knuckle boxing. 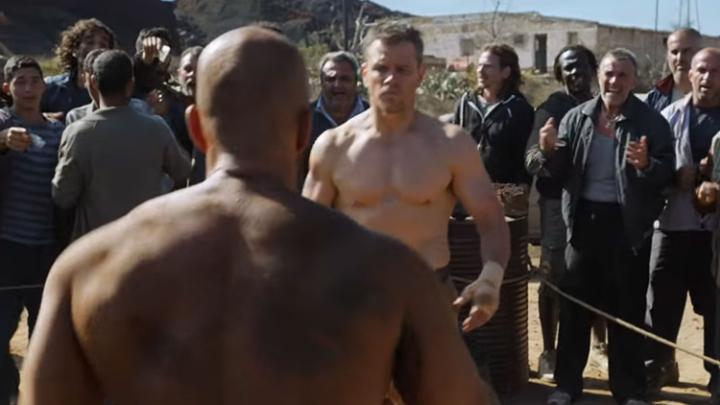 There’s been very little revealed about the actual plot and it’s difficult to guess considering all the answers about Bourne’s identity and revenge plot were largely wrapped up in The Bourne Ultimatum.?However the fact that it’s got Damon back, who has arguably become an even more successful actor since the franchise began in 2002, and director Paul Greengrass, means the script has got to be killer and the action scenes already look?as slick as ever. Have we also mentioned it stars Oscar-nominated actress and one of our 2016 girl crushes Alicia Vikander?

So go home and re-watch the trilogy and get excited for the next installment, due to hit theatres in July.