Back to school: Now the summer holidays are mercifully over, we can start looking fondly back at them

The pressure to deliver on magical summer holidays has parents torturing themselves, Sophie White is glad school’s back and she can fondly remember time spent with her kids, rather than actually having to do it every day

I was haunted by memes this summer. I guess this is a solid indicator of how much time I’ve spent on my phone in the corner of the park (or hiding in the bathroom) and not marinating in every second of time spent with my children.

“You got this, mama,” was the first one that seemed to stalk my feed. Firstly, I cannot cope with being called mum, mummy, mama or mammy by anyone that didn’t come barrelling out my vagina. I’m not some generic class of woman known simply as “mum.” I am mother to these two people and no one else. When the babies were younger, I’d regularly be thrown into the path of well-meaning public health nurses and I’d have to steel myself for the inevitable: “And how’s mum doing?” It enraged me, the wording managed to somehow be both infantilising and ageing. I knew I was reading into it, but as a new mother I was already freaking out about losing my identity, my self-being subsumed by this demanding, adorable, tyrannical baby. I did not need to be further demoted by conversational ticks such as this.

Every time I spotted the “Mama, you got this” quote infiltrating my phone time, I thought “What? What do I have? A knife to stab the person who sits around making ‘mama memes’?

As the meme stalking evolved, I noticed most of the memes seemed to share a common (and irritating AF) message: “Make the most of every second,” the memes whispered. “You’re not appreciating this enough,” the memes hissed.”You’re not doing enough,” the meme admonished. One such offender was the 18 “delicious summers” meme which I was delighted to see seemed to piss off other women too. Perhaps you’ve seen it? 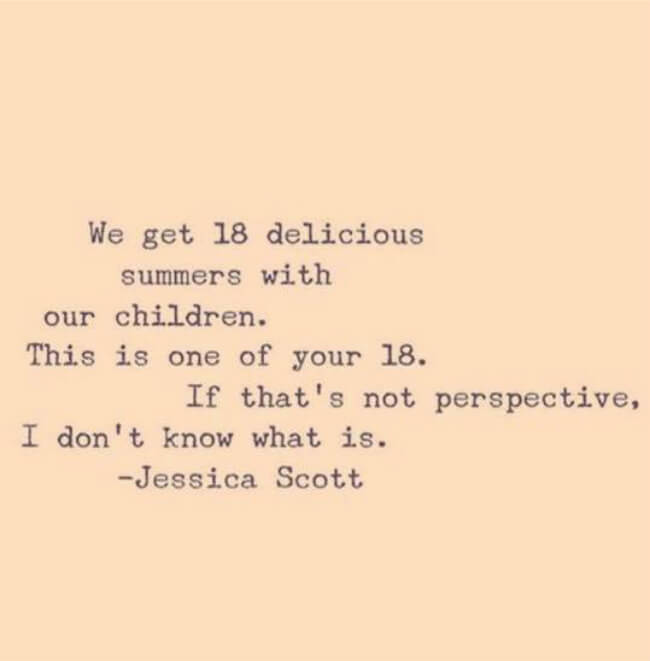 Now, I get that there isn’t some sinister meme manufacturer trying to make women like me feel shit about our parenting efforts. I realise that the message behind the 18 delicious summers is to make women savour the summers we’ve got with the babies. But TBH, I see an immediate red flag here.

Why must we make women do anything? The dads are being made to do exactly zero with regards appreciating their kids – and if they ever do happen to do something within the realm of parenting we basically throw them a freakin’ parade. Also, I have kids and I don’t need any reminder to “soak it all up”, my children wouldn’t allow me to forget to.

These children essentially live on my body. I have absolutely no choice but to soak it up, I am marinating in my kids round the clock.

The implication in the 18 summers meme is that we’re not doing the summer holidays right if we’re not ramming every day full of memory-making. And frankly, I find this extremely unhelpful. Summer holidays, for many, are a hellscape, two months being with your spawn round the clock, sending work emails while hiding in the loo, and patchy childcare. There’s so much pressure to make the most of every bit and it can all start to feel very prescriptive. Stay off the phone. Be present. No screen time. Do craft projects. Make memories.

Initially I bought into the pressure. I got up at 6am to try and stay ahead of deadlines, then my husband would go to work and I’d begin flailing for memories to make. We should do some baking, I’d misguidedly think – forgetting that watching kids trash a kitchen is not some chill summer activity. I’d bring them to the park for a picnic, only to find I’d cut the sandwiches wrong – cue 2-hour tantrum from the four-year-old. I went to IKEA one day just for the sheer hell of it. I came to realise that what I was really doing with all the magical memory-making, was just finding new, ever more public locations for my kids to have tantrums and larger audiences of strangers to witness my pathetic attempts at “gentle parenting”.

The main problem that I can see with attempting to create the perfect “delicious” summer for our kids, is…well… our kids. It’d be so much easier to make memories with a pack of rabid Velociraptors than with a one-year-old and a four-year-old. Kids don’t cooperate with making delicious summer memories.

And what about the woman who is in a hole of depression for one of her delicious summers? Or the woman who has to work full time? Or the woman who happens to have a three-year-old (it’s a TRYING age – a three-year-old could easily singlehandedly cock-block a whole summer of deliciousness)? Our own parents definitely didn’t concoct this ludicrous pressure, they just turned us out in the morning and we roamed free. Obviously 80s parenting styles aren’t exactly the gold standard of parenting, but they knew better than to let the summer become more about fretting about memories than living in the moment.

The summer needs to be a break for everyone, not a frenetic race to tick off the ultimate delicious summer bucket list. Now that it’s over and the eldest is back in school, I can ditch the ‘delicious summer’ guilt and get on with looking back on that summer fondly.