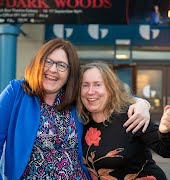 Fall in love with Mae Whitman as Dawson in this table read of Dawson’s Creek at the ATX Festival, alongside the cast of Suits and Friday Night Lights.

I’ve just rewatched this and it’s just as good as it was in 2015. Dawson’s Creek director Kevin Williamson hosted a surprise table read of the pilot episode of the hit teen show at an ATX Festival.

It wasn’t just a straight forward reading though, it was a gender-switched version that incorporated a number of cast members for shows including Friday Night Lights and Suits as well as one original cast member, Kerr Smith. He plays Jen, while Patrick J Adams takes on sarcastic Joey (originally played by Katie Holmes), his co-star Abigail Spencer as hormone-driven Pacey, first played by Joshua Jackson, who becomes infatuated with his teacher.

However, it’s Mae Whitman as lead Dawson who really steals the show, broing with Pacey, talking movies with Joey and ogling at Jen.

Find yourself a quiet corner to watch this and try not to giggle:

Whitman even fangirled a little bit by bringing a framed picture of Tim Riggins, a.k.a. Taylor Kitsch, a gift from the Friday Night Lights crew to Mae, and frankly to us all.

Whitman has been acting since she was child, playing the President’s daughter in Independence Day. Since then, she’s starred in Parenthood, teen comedy The DUFF and most recently Good Girls with Christina Hendricks and Retta.

While the whole reboot idea is very overdone lately, this is one revival I could get on board with, especially with this cast.

Read more: A Friends ‘reunion special’ is happening – but it’s not quite what you think

Read more: Get your scrunchies ready, a Saved by the Bell re-boot is coming