‘Our little fighter’: Baby Juniper and her heartbreaking message to the Health Minister

Amanda Cassidy speaks to Juniper’s Aunt about the lead up to the little girl’s diagnosis and why her family is appealing to Health Minister, Simon Harris to take urgent action.

Up until a few weeks ago, Juniper’s parents were preparing to spend their first Christmas as new parents in their new home. Six-month-old Juniper had seemed perfectly healthy up until she started to develop a rash and a chesty cough. After two weeks in Tallaght hospital, she was sent home with antibiotics but developed more infections a week later. Reluctant to seem like overly neurotic new parents but increasingly concerned that their little girl wasn’t getting any better, the couple brought her back into the hospital. Blood tests revealed some devastating news; Juniper has a rare and life-threatening genetic condition known as SCID (Severe Combined Immunodeficiency).

Doctors explained to her family that as the little girl has no immune system, she is more susceptible to dangerous infections. Treatment to save her life would involve travelling to the UK for a bone marrow transplant. Family and friends rallied and raised over 55 thousand euro to alleviate financial costs for her treatment, with any surplus funds now being passed on to help other families going through similar. 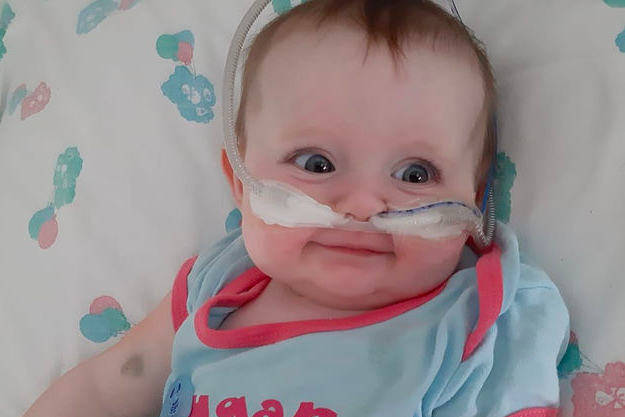 “You are not alone”

This week, Juniper and her parents arrived in the UK to prepare for treatment which begins at the end of February.  They were also thrilled to discover that Juniper’s mum can be her donor. They are preparing themselves to have to remain in the UK for possibly up to a year.  Her devastated parents also want others going through the same to know they are not alone. “Although our focus is on getting Juniper better, we want to raise awareness of SCID as the earlier it is diagnosed, the better the outcome and we want other families to avoid what we have been through.”

There is currently no charity or supports for those families living with SCID in Ireland. Juniper’s parents, although devastated by their daughter’s diagnosis, are more determined than ever to raise awareness about her illness and have appealed to the Irish Health Minister Simon Harris to introduce screening in the form of the heel-prick test for newborns. In a petition that has already received almost 3 thousand signatures, they’ve questioned why they, as non-medical professionals,  are the ones who have to fight for this. “Internationally, this screening has already been included, with success, in New Zealand, Canada, Taiwan and every state in the US. Pilot schemes have also started in Israel, Australia, the Netherlands and the UK. Moreover, studies in these countries have also concluded that early diagnosis in the heel prick test and treatment prior to infection is more cost effective to the healthcare system.”

The treatment for this condition (haematopoietic stem cell transplant-HSCT) has a much higher success rate if diagnosed early and before the affected infant acquires infections. The incidence in Ireland is approximately 1 in 37,000 children (1-2 cases per year); making it more common than half the diseases currently included in the test. In Ireland, the majority of SCID cases are not diagnosed until the affected infant develops symptoms of infection.

Survival rates after HSCT in children with SCID diagnosed late and with infection have been reported at approximately 70%. Children diagnosed and treated early (before 3 months of age), before they have acquired any infections, have a much better chance of survival. (90%)

Speaking to IMAGE.ie, Juniper’s paternal Aunt, Jeannie Higgins says that without any evidence of family history of SCID (which is a genetic condition), the only way of knowing if your child is at risk is by including it in the heel-prick test. “Part of the treatment means that Juniper will likely get sicker before she gets better which is going to be hard, but we are determined to remain positive. Juniper is a very strong little girl – she is such a happy and content little baby. This campaign to raise awareness of SCID and to fight for screening is a testament to her parents who, in their darkest hour, are thinking of other families who might be affected. Her diagnosis of SCID has been devastating and shocking, especially considering that up to a few weeks ago it seemed as if she was thriving. Due to the lack of testing for SCID, she spent 3 weeks in the hospital, on 3 different courses of antibiotics, while deteriorating rapidly before an accurate diagnosis was made. We are her voice – she shouldn’t have had to endure what she’s endured; blood transfusions, skin infections, pneumonia, winter vomiting bugs – when a simple blood test at birth could have prevented Juniper from contracting these infections and given her a higher chance at survival”.

“Our message to the Minister on behalf of Juniper is simple; Don’t let other babies have to go through what she is going through.”

Right now, all her mum and dad’s energy is focused on being at Junipers bedside, getting her through her treatment and fighting on behalf of other children with this illness. “While we know this is going to be one of the hardest things we will have to do, knowing that we have the support and positive energy of so many people behind us is going to make it that much easier. Juniper is also a fighter, with the biggest character and we have no doubt she will be the one keeping us going throughout”.

You can sign the petition for the Health Minister here.

Juniper’s GoFundMe page can be found here and includes regular updates from her family.