Life after loss: How one mother learned to let her baby go

Most cannot imagine recovering or every finding joy again after the loss of a child, one mother tells Sophie White about her journey to making peace with her daughter’s death

When Sarah and Dave went into hospital to have their first baby, they had no reason to believe that the birth would be anything other than routine. The pregnancy had been unremarkable and the couple were excited to meet their first child.

Having met in a hostel while travelling in Chile, they eventually settled close to Brighton where their daughter Alice was born on the 20th November 2014, after a long, hard 30-hour natural labour. Unbeknownst to the couple, the baby had been in distress for the last 30 minutes of the birth and her heart rate had dropped dangerously low.

“It was never identified and so when they did realise there was a problem it was too late,” Sarah explains.

Alice looked perfect, but the damage she had sustained while in distress during the minutes before she was delivered wrecked devastating effects and she would never be able to breathe on her own. She died a few days later.

“We had a wonderful five days with Alice. We cared for her, we read her stories, we took lots of pictures, we touched her, we got to hold her a few times, we dressed her, took her footprints, we even had her Christened. All of our close family was around us the whole time, the support we felt was amazing. The hospital took such good care of her too.” 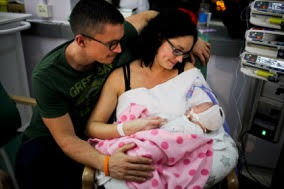 More than three years have passed and Sarah has subsequently given birth to two cherished sons but it is only recently that the family received a real explanation for what happened to their baby girl. Sarah and Dave settled a case with Brighton Hospital through mediation which brought some closure and crucially a change to internal processes within the hospital to help prevent future loses. However, it also revealed the negligence that had caused her daughter’s totally avoidable death.

“The whole process took three and a half years which would put a lot of people off doing it but it was good. It helped us get an expert opinion, we had consultants reading all the paperwork. They looked at the scan and the trace and helped us to piece together what had actually happened and what should’ve happened, with a revised timeline, if the midwife had been doing what she was supposed to be doing and checking what she was supposed to be checking.”

“The hardest part is that she probably had a good hour and a half to two hours to identify the problem, and that up to about ten minutes prior to when Alice was actually born, she probably would have survived okay and that’s the kicker. It was gut-wrenching.”

Speaking to Sarah now, I am struck by her strength and her ability revisit the indescribably bleak time after losing Alice.

“The first Christmas after was horrendous, I just wanted to stay in bed with a bottle of vodka but we hosted that Christmas my husband wanted to. It was a distraction I suppose.”

“We never used to drink, just at the weekends really but after Alice died we were opening a bottle every day and I allowed myself to do it for a while. And for a little while, it helped, but there comes a point when you’ve got to face what’s happened. It sometimes felt like a hole in my stomach that I had to fill up. It was definitely numbing but then the next day you’re worse for it.”

In the aftermath of Alice’s death, Sarah and Dave went to Thailand to try and begin the process of coming to terms with their loss. Family and friends had rallied but even with all the loving support they were giving her, Sarah felt exhausted by the contact. 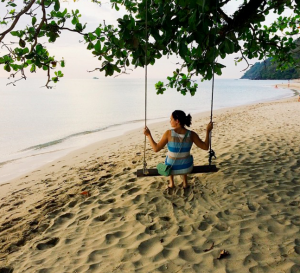 “We needed to get away… We went to Thailand for two weeks after Alice’s funeral and we went down to the sea and threw rocks in.”

A ritual evolved from that day and the couple now honours their daughter’s birthday every year by giving her messages of love written on stones and throwing them into the ocean. 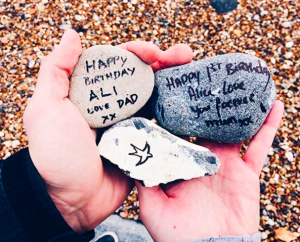 “Last year we did it with Casper, and had a cake because he likes cake. It’s an emotional day, I roared crying when I was throwing it in the sea. But it’s a moment, it’s transient one.” 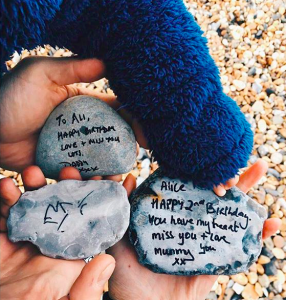 The process of throwing the rocks was the first steps Sarah took on the road to allowing herself to loosen her grip on her lost little girl.

“At first I allowed myself to wallow. I stayed off work for 4 months. I slept in, I watched movies, I filled my time with cooking and redesigning my personal photography website. A few times I decided not to get out of bed at all, all day. But not long into my period of mourning I realised I didn’t want to feel like this forever. I am young, we are young, we so desperately wanted a family, we want to be happy. So I consciously made the decision to choose those thoughts over the ‘what if’, the loss, the pain, the grief.”

Sarah became proactive about her recovery, in talking to her I am inspired by her ability to be philosophical about a loss so profound and unjust, that it would surely bury another person in anger and despair.

“My background wasn’t one of major positivity but one where I’d turned it around. I have a very spiritual outlook, not religious necessarily. I believe Alice chose us, I believe this was her path. She only ever experienced love from us, from family and then from all over the world.”

Sarah found reaching out online gave her a huge sense of support and eventually, the couple set up a fundraising page for the Rocking Horse Charity in Alice’s name as a tribute to their daughter and to give back to the neonatal unit that had cared for her.

“I sought help too. I saw a counsellor about my return to work and how I was going to handle it.” Alice works in Bupa Global and also runs the online store YoungHearts.ie with her sister.

Acupuncture, Reiki sessions, Skype healing sessions and writing about her daughter all helped Sarah to recover little by little.

“They helped me to positively release Alice – I was holding on to her too much in a way that was not letting her or myself move on to where we needed to be. I was still sleeping with a teddy of hers for example. Although painful to do, this was totally the right thing to do. This happened around the three-month mark and the pain in my heart eased quite quickly after that. When I go to bed at night – I still do this – I see her and talk to her but I am totally at peace with it. I have her in my life, just not in the conventional way.”

During her second pregnancy, Sarah discovered a technique called Emotional Freedom Technique (EFT) or ‘tapping’ which has proved to be life-changing, so much so that she is training to become a practitioner in order to help others.

“For me the tapping has released a lot – if not all – of the trauma around Alice’s birth and death, so that I can recall and talk about it without feeling all of the raw pain I had been feeling before. It doesn’t change anything about what actually happened but the pain in my body surrounding the events has shifted, and it is permanent.”

“I feel so blessed and grateful for our two boys. If we hadn’t had Alice the way we did, we probably wouldn’t have had Josh. I definitely wasn’t planning on having three kids! I believe this was how it was always going to be. As hard as it was, I wouldn’t change it.”

‘I am bereft, and Christmas with all its touching, family, sparkling happiness; feels like a cruel joke’