Life-Changing Stories: ‘I’ll never forget her face at that window. I couldn’t save her from the fire’

Anita Meenehan’s story is truly extraordinary. She managed to turn her family’s horrific tragedy into a powerful life philosophy that focuses on helping others. This week, at the Network Ireland event organised for International Women’s Day at Tulfarris House in Co Wicklow, Anita bravely shared the story of that night – a story that she’s never shared before.

“I can still hear my little brother calling me,” Anita says sadly. “To this day, I’ll never forget my mother’s face at that window.”

In 1995, Anita, aged just 19, brought her second baby home from the hospital – a new sibling for her two-year-old toddler. The entire household was thrilled with the arrival of this newest bundle of joy.

Already living there at the house in Rathangan, Co. Kildare was her mother, who’d had a brain stroke the year previously, and Anita’s own younger siblings, aged 4, 5, 7 and 9.

“I could hear them calling me but I couldn’t get to them.”

It was a busy but happy household and as they drifted off to sleep that night in April, nothing seemed out of the ordinary.

“I awoke to the smell of smoke” remembers Anita, whose baby was just 12 days old at the time. “I looked down at the door and I could see black smoke through the door, under and into the room. I jumped up and grabbed my two little ones.

The house was ablaze at this stage. I knew I had to either throw my babies through the window or get them out somehow. I managed to grab some of the other children but the fire and smoke were too much. I could hear them calling me but I couldn’t get to them.”

Outside, Anita says the neighbours were trying to break the glass in the windows but the pressure was too great. “I looked up and I could see them at the window. I’ll never forget that look on my mother’s face. I can see it now.”

Later, the fire officers explained to Anita that her four-year-old brother was found lying in the landing. He would have died after about four breaths of the toxic smoke, they explained to her. Her mother most likely succumbed after 6-8 breaths. The cause of the blaze was undetermined, but some officers told Anita privately that the cause was most likely faulty wiring.

I knew that if I looked like I was falling apart, I would fall apart

But, understandably, nothing could give Anita any solace. “I found comfort in nothing. We had no insurance, no money, nowhere to go. I was 19 years old and I felt like I’d let my mum down because I’d left her in the house. I knew one thing though — I knew that if I didn’t pretend I was ok on some level, that these children would be taken off me.

My husband’s family took us in for a bit, we eventually got a one-bedroom council house where we lived for three years. Looking back, the smaller the house, the more secure I felt. I didn’t sleep for a long time. I’d be up all night checking on everyone, checking to see if anything was wrong with the house.”

I was either going to die or make a life for myself – they were my two options.

“I needed to self protect. I knew that if I looked like I was falling apart, I would fall apart. The perception that everything was fine was more important to me at the time than actually dealing with my feelings. I had all these little faces looking up to me — I couldn’t show any weakness. The only one who knew was my husband. He’s the one who sat up with me each night to make sure he still had a wife in the morning”. 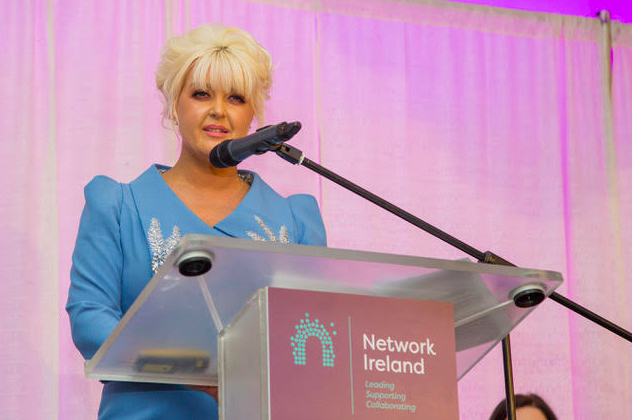 I decided the best thing I could do was to get up every day and live my life for her.

Instead, Anita buried her pain. “I didn’t care for myself for a long time. I couldn’t look in the mirror. I didn’t like what I saw. It took a long time for me to dig deep. I told myself  I’m either going to die or make a life for myself – they were my two options. I’d gone that far in my mind. But I knew my children needed me. What would happen to these children without me? I decided to take on a course which led me to want to have a degree – in beauty therapy”.

She started training at night, often getting home at 1 am and up again at 6.30 am to get everyone off to school.

“I often wonder about how I functioned at that stage. How do I move on from that image of my mother’s face at the window? I decided the best thing I could do was to get up every day and live my life for her. That is how I do it.”

Anita eventually went into pharmacy and now manages Mangan’s Pharmacy in Newbridge. She describes it as her happy place and says it has been a dream to build the business. She says she now has a mission. “I’m showing people in general, especially women because we are such creatures of self-doubt, not to underestimate the power within.

Go out there and be that somebody that can make a difference even just to one person.

I want others to know that you can dig deep and you can overcome tragedy even if you think at the time there is no escape. You won’t feel like this forever. Retraining the brain, you can push yourself forward. And you can be the person you aspire to be.”

She wants others to help too. “One person can make a huge difference. I spoke to a lot of people who were on the verge of taking their own lives. Because I spoke to them, some of them didn’t and then came back to thank me. That’s when I realised the power we have – to give back to others, to make a difference to their lives too.

“Go out there and be that somebody that can make a difference even just to one person,” she says passionately. “Helping others is what keeps us all going.  That, and the knowledge that my mum would be immensely proud of the person I’ve become.

I think I’m the person she always wanted me to be, I hope I am.”

Read more: Life-changing stories: ‘I’m custodian of these organs. I’ve very aware someone died for me to be here’

Read more: Life-changing stories: ‘I’ll do whatever it takes to help my daughter’